In Memory of His Grace Vasudeva Prabhu 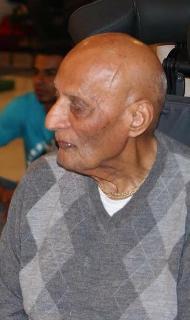 By The GBC Executive Committee

The GBC Executive Committee joins the devotees of ISKCON Fiji in honoring the life of His Grace Vasudeva Prabhu, a pioneer in establishing Krsna consciousness in Fiji. From the moment Vasudeva Prabhu first saw the devotees from the window of a Sydney office building, his immediate desire was to know Srila Prabhupada. He asked, "Who has tranformed these people?" He finally met Srila Prabhupada while His Divine Grace's flight from Australia to the United States stopped in Fiji for just two hours. At that very moment, Vasudeva Prabhu immediately offered his lif... 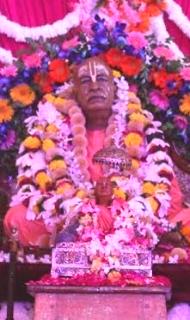 A 5 and a half hours video recording of the memories and narrations of many older devotees, disciples of His Divine Grace, during the big celebrations that took place in Iskcon's Krishna Balaram Mandir in Raman Reti, Vrindavana for the 40th Disappearance Day of His Divine Grace A.C. Bhaktivedanta Swami Prabhupada. An infinite ocean of nectar from the heartfelt glorifications of these fortunate souls who got the direct association of Srila Prabhupada. 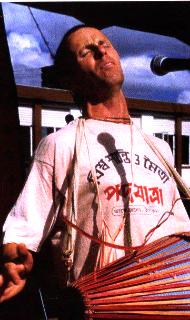 Our dear Godbrother, Tribhuvanatha das, departed from this world on October 16, 2001. A lot has been written about Tribhuvanatha Prabhu over the years — his dynamic preaching programs, his ecstatic harinamas, his fired up classes, etc. -- but I simply remember him as my best friend. 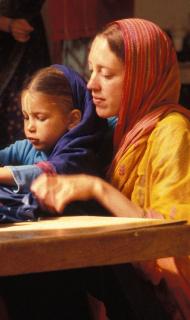 Our dear Godsister, Saradiya devi dasi, departed from this world on Sri Krishna Saradiya Rasayatra to be with her eternal father, Srila Prabhupada. Her sincerity and love for Srila Prabhupada is unparalleled. May we follow in her footsteps. Bonds of Love by Saradiya Devi Dasi. Srila Prabhupada and Saradiya. Bhaktivedanta Manor Pancha-Tattva Painting 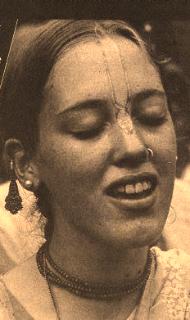 It is a miracle of good fortune that Srila Prabhupada’s disciple, Saradiya dasi, should leave her physical body on the very day of the Sri Krsna Saradiya Rasa-yatra (October 5, 2017). She left at 6:15 a.m. San Diego time. The time zone in India is twelve and a half hours ahead of California, so it was 6:45 p.m. in Vrindaban at that moment. The moon rose at 6:03 p.m. in Vrindaban. So Saradiya left her body just as the moon was rising above the horizon in Sri Vrindaban Dham.

Mother Kulangana: a Life and Legacy of Devotion By Kripamoya Das and Trisha Motah

Mother Kulangana was always known as a kind and gentle soul with a nature as sweet as her service. She will be missed by so many - the majority of the community cannot even recall a time when she was not present in their lives. Although she leaves this world behind, her legacy lives on. And in every soft mangal arati sweet the devotees of Bhaktivedanta Manor offer to Sri Sri Radha Gokulanada, there will reside the memory of Mother Kulangana’s soft and sweet devotion. Mother Kulangana’s life will remain an inspiration for generations to come. Her dedic...

When Krishna thrusts his mercy, inconceivably 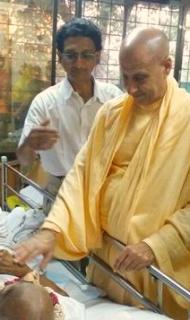 An inspiring departure. For many years, Shri Shah had been averse to even visit Vaishnava Seva P’s house, leave alone stay there. Like most fathers, he had had great dreams for his son. When Vaishnava Seva Prabhu had started practicing bhakti, his father had become upset. His anger was not because they were from a Jain background, but because he feared that his son would neglect his career. In his disappointment, he had spoken heated words to, Vaishnava Seva Prabhu’s spiritual master, HH Radhanatha Maharaj. He had even threatened to not attend Vaishnava Seva Prab... I served on Radha-Damodar Traveling Sankirtan Party for the next three years as a bus leader. Tamal Krishna Goswami was a hard taskmaster, but he was able to motivate me like no one had done before, and in turn, I was able to motivate others. He saw something of my potential for service, and I had faith and appreciation for him. As bus leader I had to call him from the field once a week, and those calls either left me tearful because I had let him down or elated because he was pleased. He had a powerful effect on my life that has been with me ever since. By 1979, the Radha-D...

An Offering To Gandharvika Dasi Although I am missing you dearly, I am so very happy and proud of you that you you made your life successful by offering it fully at Srila Prabhupada's lotus feet. At our first meeting at Govinda's in San Diego during the early 80's when you were just a new devotee, you expressed your desire to travel alongside our party and help in any way that you could. I told you that at that time that it wouldn't be practical, but I knew then from seeing your wonderful qualities that one day I would be very honored to help you fully engage in Srila Prabhupada's mission. Soon aft... Around 8 a.m. on August 6th I entered her room and found that she was getting closer to leaving her body. She was unresponsive to verbal cues and her body was quite limp. I took this opportunity to sing the Maha Mantra one last time while she received her final bath.

Bhadranga – a lover of kirtan He was always known for being jovial and bubbly. Many used to find having conversations with him very entertaining. He was very friendly and got along with any stranger he came across. He was very fond of Aindra Prabhu's kirtans and used to run the 10hr kirtan programme with Nrsingha Tirtha Prabhu at Bhaktivedanta Manor. He was good to talk with about the philosophy and used to share his realisations. After he moved to the Netherlands to pursue his PhD in religious studies. Unfortunately, we lost contact in the last couple of years, but devotees often remembered him...

Until We Meet Again I'll never forget the wonderful reception the devotees gave you in Mayapura. They knew you were coming to the holy dhama to leave your body, and they rushed to greet you and express their appreciation for your years of service. Our car slowed to a snail's pace as everyone surged forward in a show of love. How proud I was of you! How grateful I was to Krsna for arranging such an acknowledgment of your service! Now you are gone, and the days of your association are no more. Your humor, which could light up the darkest day, is a distant... Sri Srimad Gaura Govinda Goswami Maharaja dedicated his life to fulfilling Srila Prabhupada’s order to spread Krishna consciousness throughout the world and specifically among the people of Orissa. He translated Srila Prabhupada's transcendental literature and fulfilled Srila Prabhupada's desire for a Krishna-Balaram Temple in Bhubanesvara. He was not only a topmost devotee but he was also a great and learned scholar. In this time of their great grief, we pledge ourselves to the service of his disciples and followers who are determined to car... On February 7th, Bhaimi Ekadasi, Srila Prabhupada disciple Gopinatha Acarya Prabhu disappeared at New Govardhan Farm in Murwillumbah, New South Wales, where he had cared for Krishna’s land, cows and bulls for decades. Well known in the seventies and early eighties for his dedication to book distribution, he later became one of our movements great teachers of simple living and high thinking. I stayed on New Govardhan for a number of years and was fortunate to have had his association. I wanted to share some of my experiences of this great soul... I was repeatedly asked, "What was Jim like in school?" Well, you know, that was quite a few years ago. I had even forgotten, or just not given a thought to the fact that Jim and I lived in the same cabin in summer camp. I forgot that until I came upon the 1951 camp photo. And the photo of Jim on the front of the chariot is unrecognizable because of the years, the Hare Krishna robes Jim is wearing, and because as they said, the photo is not a good one because it was not taken until Jim was very ill. I told them that Jim was very funny. They ... His Holiness Vrajendra nandan Swami went to England from Malaysia to study Engineering. He was living in Birmingham at a YMCA. He met ISKCON members there while they were distributing Srila Prabhupada literatures. He was induced to take the books, he liked the books and finally he took the books. He was studying there and he started coming gradually to the Birmingham temple at Hemsworth where he again met the devotees and he took more books. From then on also took the devotees to the Universities, local colleges and Indians to distribute Srila Prabhupada books and literat... HH Bhaktivrajendranandana Maharaja was born in Malaysia. He came to the UK to study where he joined ISKCON in 1971 in Birmingham. He was around 33 years old at the time of joining. Subhag, now swami, was his inspiration at that time and remained so throughout his life. He then moved to Bury Place temple in early 1972 and served selflessly there for several years - he was known as the simple hard working, surrendered brahmacari who would never miss anything. He received initiation in July 1972 from Srila Prabhupada on Trafalgar Square, receiving the name Vrajendra Kumar. ... Please join us in prayers for my dear friend and Godbrother, HH Bhakti Vrajendra Nandan Maharaja, President of ISKCON Malaysia, who just left his body this morning in Sri Jagannatha Mandir, Kuala Lampur. He has been suffering from very ill health for a long time now. Previously, he had been the Temple Commander in Sri Sri Krishna Balaram Mandir, Vrindavan. Maharaja did extensive preaching in Malaysia and will be sorely missed. As a Manipuri Vaishnava and a studious scientist student from the prestigious University of California - Irvine, USA, Sripada maharaj won the heart of his spiritual master H.D.G. A.C. Bhaktivedanta Swami Prabhupada in their very first meeting. It was Sripada Maharaj's scientist colleague Ramananda Raya (Dr. Ravindra Rao) who introduced maharaj to Srila Prabhupada. As maharaj recalls, Srila Prabhupada and maharaj looked intently at each other's eyes for a few moments and then Prabhupada spoke. In their first meeting, while appreciating the temples... For the 15th anniversary of the disappearance from the this world of His Grace Tribhuvanatha Prabhu, at the end of November 2016, devotees premiered at Bhaktivedanta Manor a special 30 minute movie featuring footage of historic and pioneering preaching activities around the world and especially in Africa, and audio remembrances of Tribhuvanatha Prabhu and his preaching efforts. They also spoke and shared memories at the program. After the program at the temple they continued for Maha Harinama Sankirtana, more than 100 devotees in Central London attended. The same ...