Lord Jagannath stroll in the ‘Veranda of Mecca’

On the day of the festival, the devotees started to prepare a small chariot early in the morning from mentor ( like a rickshaw in India). The Chariot was decorated with flower garlands and a small altar was made for the lord to sit. As the evening set in, the Lordships Sri Sri Jagannath, Baladev and Subhadra devi were brought and nicely seated on the chariot. The festival started. Devotees began to sing the Hare Krishna Maha-mantra with full enthusiasm and distributed prasadam already offered to Lord Jagannath. Srigarbha prabhu and other devotees distributed Srila Prabhupada books. Many ... 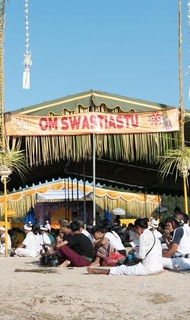 On the 12th of May 2019, devotees in Bali, Indonesia headed by Jagannath Gauranga Ashram organized the annual Cida-dahi festival. The day before the festival was the bi-annual Balinese festival; Sarasvati Puja. The following day, which coincided with the Cida-dahi festival was where the locals take their purificatory bath and conduct various rituals. The festival took place at the famous Merta Sari beach. Preparation started the day before the festival with devotees setting up and decorating the pandal at the beach throughout the night. Other devotees also prepared the 25kg chipped rice Prasa...

International Seminar On Communications, Religion and Culture (ISO-CRC) in Bali 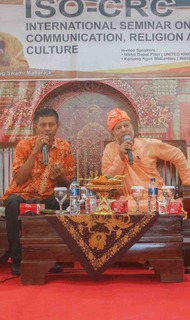 On the 8th of May 2019 an International Seminar was held on Communications, Religion and Culture (ISO-CRC) at the prestigious Sekolah Tinggi Agama Hindu (College of Hindu Religion), Singaraja, Bali. HH Subhag Swami was invited as the keynote speaker to attend the seminar and discourse on, ‘An Introduction to Religion and the Essence of Vedic Knowledge.’ An audience of 200 students, faculty chairman and faculty secretaries were present.

Thirty-two new Krishna devotees have completed the Spring 2019 semester at the Bhakti Academy, held at Krishna House (ISKCON of Gainesville, Florida, USA). Some highlights: Bhakti-sastri: Seven devotees completed the full Bhakti-sastri curriculum, offered for the first time at Krishna House. Rupachandra Prabhu, who lived at Krishna House for six years while completing his PhD studies, accepted a faculty position at a prestigious university in New York. Book Distribution: Five men will be going out for full time book distribution this summer. (Many of the top book distributors in the US ...

Caring For Krishna’s Devotees: The VCC Gets Official!

As many are aware, New Govardhana’s Vaishnava Care Committee (VCC) has formed to assist seriously ill devotees and those in need of palliative care within our community. On 20 February, the VCC officially registered as a non-profit incorporated association. The VCC has also applied to the Australian Charities and Not-for-profit Commission (ACNC) for charity status, which, if approved, will allow tax deductions for contributors. The VCC requires this status because it plans to construct a palliative care residence on New Govardhana.

A Report on The Glory of Saurashtra – ISKCON Rajkot Temple

The inauguration ceremony of ISKCON temple in Rajkot, “The Glory of Saurashtra” was celebrated with great enthusiasm on the auspicious day of Sri Rama Navami (14th Apr) in the presence of exalted sannyasis, senior disciples of Prabhupada and senior vaishnavas from across the world, presided over by ISKCON India Chairman and GBC H H Gopal Krishna Goswami Maharaj and ISKCON Gujarat Secretary and senior disciple of Srila Prabhupada, H G Yashomatinandan Prabhu. Thousands of devotees from around the world participated in the 3 days’ festivities and over 50,000 visitors thronged the te...

Is a devotee also an eco-warrior?

For the last 11 days and nights a massive eco demonstration has taken place around the planet, here in London 5 main traffic arteries have been blocked by concerned activists and over a thousand people arrested. Hitting the headlines of every newspaper, constantly covered by every form of media, and now supported by many politicians, school children and community leaders. So what has that got to do with Krishna Consciousness? We are not environmentalists or eco-warriors! But how to deliver Lord Caitanya's message? One of our 3 main activities is Prasad distribution and if we use Polystyren...

On the auspicious day of Ram Naumi 2019, we inaugurated a monthly outreach programme called "The Vedic Essence" and also a harinam in Worcester town centre. A group of devotees (some from London) performed a 5 hour harinam in Worcester town centre on the day, distributed 200 maha cookies, 250 flyers and books. The Mayor of Worcester heard the holyname being sung and came out of his office to welcome the devotees which really inspired everyone. The Mayor was delighted with our endeavours and asked if we could also perform Kirtan at a council event next August. We are now looking to arrang...

This year's parade was special because the show got enlivened with 40 decorative cars and boasted of participants from 37 cross-cultural communities. ISKCON community in Surabaya was also given invitation and as soon as the opportunity arrived, the devotees arranged for the Lord Jagannath's chariot festival. Devotees enjoyed spiritual bliss on pulling Lord Jagannath's chariot and the people of Surabaya in turn received the inconceivable merciful blessings of Lord Jagannath. Here is a short report.

OCHS celebrates its 20th anniversary at the House of Lords

The Oxford Centre for Hindu Studies, the world’s leading Centre for Hindu Studies, celebrated its 20 years at the House of Lords at the River Room, hosted by Lord Dholakia. Lord Dholakia informed the audience of the value of OCHS which is a seat of academic studies with scholars and research capabilities. He highlighted the need to create a bridge between the Mandirs who support Hindu activities and the OCHS which enables knowledge building. He remarked about the poor representation of Hindus in the Parliament. There was a need for authentic independent representation of Hindu value...

On Saturday March 23, 2019, ISKCON of Richmond received an inspiring visit from National Convenor for National Ganga Mission, Dr. Snehal Donde, who gave a talk entitled “The Agony of Rivers”. Dr. Donde is the research officer at Bhaktivedanta Vidyapeeth Research Centre in Govardhan Eco Village in Mumbai. She works closely with His Holiness Radhanath Swami and His Grace Gauranga prabhu to advise in water conservation practices in the center. Dr. Donde has more than twenty-four years of experience in the fields of education, research, and administration. She holds two PhDs in the fiel...

With the full text in English, Russian, and German, with more languages being prepared. The text is fully - and quickly! - searchable in each language. Easy-to-read with many customizable features, including the ability to bookmark, highlight, and make notes. Full Sanskrit diacritics on the text and a glossary, just as in the print edition. Switch easily from one language to another - you can compare the Russian or German to the English or vice versa. Read in your own language or practice learning a new language using Srila Prabhupada's book as a guide.

Yesterday in Dunedin New Zealand's Prime Minister Jacinda Ardern was visiting a local Mosque ..to comfort and reassure the Local Muslim Community after the recent terror attack in Christchurch where 50 Muslim worshippers were brutally murdered while praying. She then made her way to The Otago University Clubs and Societies Building where ISKCON Dunedin holds their Krishna Lunch Program. Daily feeding at least 250 hungry and very grateful students and staff..delicious nutritious prasadam. As the Prime Minister walked up the stairs Jahnava Mata dasi the Krishna Lunch coordinator gree...

On March 17 the ISKCON Ahmedabad temple devotees conducted their thirty-third monthly one-day padayatra. Called the Glories of Gaura-hari, a shorter walk this time of just 6km, the padayatra was held to promote the glories of Gaura-purnima, the appearance day of Sri Caitanya Mahaprabhu.

Under the organization of Ministry of External Affairs Government of India and Indian Council for Cultural Relations, Prayagraj hosted at least one person from every country at the occasion of the sacred Kumbh festival. Kumbha Mela is unique and world's largest event in which hundreds of millions of spiritualists converge for a holy dip at the confluence of the sacred rivers Ganga, Yamuna and invisible Saraswati. UNESCO has recognized this festival as an Intangible Cultural Heritage of the humanity.

The month of March brings Nyepi - the day of silence throughout the whole of Bali. In the Balinese lunar calendar (Saka), Nyepi is New Year's Day. It is a day wholly dedicated to rest, staying in, turning off the lights and keeping quiet for 24 hours. It is one of the biggest and most unique ceremonies of the year, where staying in and resting is enforced by law. It is practiced island-wide where the Balinese dedicate an entire day to introspection and spiritual cleansing.

Sri Caitanya Mahaprabhu left His house (where the Yoga Pitha is situated) in the early morning heading to the Ganga. He crossed the river by swimming on His way to Katva to take sannyasa. When Saci mata understood that He was not in the house, she left looking for him, asking the villagers " Did you see Nimai?" In their hearts, the eternal associates of the Lord in the form of villagers, just remained silent. By seeing their behaviour mother Saci said:" You are just merciless."

The next stop was the house of Saranga Murari, the famous guru who initiated a dead body that was floating in the Ganga in the early morning. His very unique pastimes made the devotees laugh when they heard the incredible activities of this unique vaishnava. The most humble and sincere Vasudeva datta was also living in this house and His beautiful deities are still there: Radha Madhan Gopal, they are very tall and Gopal has light blue body with big lotus eyes. Once Caitanya Mahaprabhu came to this place and for the pleasure of the devotees he saved a tree which was giving shadow in the c...

So, we can't describe the happiness of the devotees to visit such sacred places! Champahati (or the market of jasmines) are one of the most beautiful places in Navadvipa Dhama. The Lordships Gaura Gadhadara are forever worshipped here. They were installed by Gadadhara pandit's nephew. Campahatti is also the place where Jayadeva Goswami wrote his world famous Gita Govinda poems. In this very sacred place Jayadeva Goswami and his wife Padmavati had the darshan of the Supreme Personality of Godhead Sri Krsna! Every year the Parikrama party stop in Champatti and have a great time with Katha...

Holy Name Retreat for the youth at Ekachakra Dham

In February, the leaders of the Sri Mayapur International School had requested me to spend quality time with their pupils aged 11 to 18. We had decided to first welcome the boys with a group of teachers for two days to Nityananda's abode, and then a bus-load of girls and their teachers. What a wonderful excursion! Our children are very special, and they start chanting in japa and kirtan already at a very young age. If we can inspire them to develop good chanting habits from the very beginning of their life, it will give them a wonderful start to their way back home, back to Godhead. <...