Yesterday in Dunedin New Zealand's Prime Minister Jacinda Ardern was visiting a local Mosque ..to comfort and reassure the Local Muslim Community after the recent terror attack in Christchurch where 50 Muslim worshippers were brutally murdered while praying. She then made her way to The Otago University Clubs and Societies Building where ISKCON Dunedin holds their Krishna Lunch Program. Daily feeding at least 250 hungry and very grateful students and staff..delicious nutritious prasadam. As the Prime Minister walked up the stairs Jahnava Mata dasi the Krishna Lunch coordinator gree...

On March 17 the ISKCON Ahmedabad temple devotees conducted their thirty-third monthly one-day padayatra. Called the Glories of Gaura-hari, a shorter walk this time of just 6km, the padayatra was held to promote the glories of Gaura-purnima, the appearance day of Sri Caitanya Mahaprabhu.

Under the organization of Ministry of External Affairs Government of India and Indian Council for Cultural Relations, Prayagraj hosted at least one person from every country at the occasion of the sacred Kumbh festival. Kumbha Mela is unique and world's largest event in which hundreds of millions of spiritualists converge for a holy dip at the confluence of the sacred rivers Ganga, Yamuna and invisible Saraswati. UNESCO has recognized this festival as an Intangible Cultural Heritage of the humanity.

The month of March brings Nyepi - the day of silence throughout the whole of Bali. In the Balinese lunar calendar (Saka), Nyepi is New Year's Day. It is a day wholly dedicated to rest, staying in, turning off the lights and keeping quiet for 24 hours. It is one of the biggest and most unique ceremonies of the year, where staying in and resting is enforced by law. It is practiced island-wide where the Balinese dedicate an entire day to introspection and spiritual cleansing.

Sri Caitanya Mahaprabhu left His house (where the Yoga Pitha is situated) in the early morning heading to the Ganga. He crossed the river by swimming on His way to Katva to take sannyasa. When Saci mata understood that He was not in the house, she left looking for him, asking the villagers " Did you see Nimai?" In their hearts, the eternal associates of the Lord in the form of villagers, just remained silent. By seeing their behaviour mother Saci said:" You are just merciless."

The next stop was the house of Saranga Murari, the famous guru who initiated a dead body that was floating in the Ganga in the early morning. His very unique pastimes made the devotees laugh when they heard the incredible activities of this unique vaishnava. The most humble and sincere Vasudeva datta was also living in this house and His beautiful deities are still there: Radha Madhan Gopal, they are very tall and Gopal has light blue body with big lotus eyes. Once Caitanya Mahaprabhu came to this place and for the pleasure of the devotees he saved a tree which was giving shadow in the c...

So, we can't describe the happiness of the devotees to visit such sacred places! Champahati (or the market of jasmines) are one of the most beautiful places in Navadvipa Dhama. The Lordships Gaura Gadhadara are forever worshipped here. They were installed by Gadadhara pandit's nephew. Campahatti is also the place where Jayadeva Goswami wrote his world famous Gita Govinda poems. In this very sacred place Jayadeva Goswami and his wife Padmavati had the darshan of the Supreme Personality of Godhead Sri Krsna! Every year the Parikrama party stop in Champatti and have a great time with Katha...

Holy Name Retreat for the youth at Ekachakra Dham

In February, the leaders of the Sri Mayapur International School had requested me to spend quality time with their pupils aged 11 to 18. We had decided to first welcome the boys with a group of teachers for two days to Nityananda's abode, and then a bus-load of girls and their teachers. What a wonderful excursion! Our children are very special, and they start chanting in japa and kirtan already at a very young age. If we can inspire them to develop good chanting habits from the very beginning of their life, it will give them a wonderful start to their way back home, back to Godhead. <...

Devotees from 60+ Countries Chant Together in the Birthplace of Sankirtana

In 2019, kirtan is readily available anywhere in the world. Kirtan is daily performed in temples and on the streets across the globe. Every year, more kirtan events are held, some drawing hundreds of thousands. Kirtan recordings and albums are available online at any time. Even so-called mainstream culture in the Western world is embracing kirtan as a form of meditation in the music and yoga scene. Kirtan is now available for all. But it wasn’t always like this. Before the 15th century, the chanting of God’s own holy names was a sacred activity reserved for the highest of ecclesiastic...

At the official opening of Krishna's Castle in the City of London on March 1st 2019, representatives from 10 banks and businesses were in attendance. Since 14 months Krishna's Castle, situated in the heart of the banking world, has been a hive of devotional service. We need about 10 volunteers daily and half of them are bankers who come to do their Corporate Social Responsibly.

19 February 2019, Chennai: Tamil Nadu Government has issued "Best Translator Award 2019" to Sri Giridhari Dasa, for translating Srila Prabhupada's Sri Caitanya Caritamrta into Tamil. The government has recognized that the translation work of over 8,000 pages was done in fine language with elegance. In the function held in Chennai Secretariat Office, the Honorable Chief Minister of Tamil Nadu Mr. Edapadi K Palaniswami issued the award along with a certificate, and a cheque for INR One Lakh. The Honorable Deputy Chief Minister Mr. O Panner Selvam, Tamil Language and Cultural Development ...

By London College of Vedic Studies

Sri Sri Radha-Londonisvara are some of ISKCON’s famous Deities, in fact Srila Prabhupada’s Lilamrita recalls the story of Their installation with great affection. Therefore as a result the Deity worship department at our Temple is always striving to serve Their most beautiful Lordships with ever increasing love and devotion. One way in which this endeavour is manifest is through constant training. As such, we recently held the course ‘Introduction to Pujari’, facilitated by the our Head Priest HG Murli Manohara dasa.

For this project we got 100% support from the police, the Mayor, local politicians, local charities, local businesses, supermarkets, football clubs and one unique aspect of the project is we made solid friendships with some ministers from a Christian church and we are working together as a serious team. The cafe is beautiful, clean and friendly. So many people came for the opening ceremony that many couldn't get through the door. The Mayor loved the taste of so many different preps and remarked that only people who serve out of love can produce such food.

May Mother Ganges Bless You Today

Ever since becoming a devotee of Lord Krishna in 1970, I have been fascinated with the Kumbha Mela festival. This year I decided to join millions of other pilgrims in the journey to the Ardha Kumbha Mela where, from January 15th to March 4th, ISKCON devotees were to follow in Srila Prabhupada’s footsteps by bringing his books, the Holy Names and prasadam to the festival. Kumbha Mela is the largest religious gathering in the world. Estimates anticipated that 120 million pilgrims—nearly double the population of England and France combined—would visit the Mela over seven weeks. Th...

New Delhi: Prime Minister Narendra Modi on Tuesday boarded a metro train from Khan Market station on way to attend an event at ISKCON temple in south Delhi's East of Kailash, officials said. Modi unveiled a giant Bhagavad Gita, running into 670 pages and weighing 800 kg, at the temple, located near Kailash Colony metro station. Dubbed the 'Astounding Bhagavad Gita', and measuring 2.8 m by 2 m, it is billed as the "largest principle sacred text ever to be printed," according to ISCKON.

As one of the participants of the festival devotees prepared the chariot nicely. the preparation was held at parking area in front of stores area. Devotees from Bali came earlier and made flower garland and the chariot team reassembled the chariot. A bus full of devotees from Lampung also participated on the ratha yatra of Lord Jagannath. They also carried Lord Jaganntah, Lord Balaram, and Their beloved sister Subadra devi on long journey from Lamung to Bogor. Devotees from Lampung arrived in Bogor at 01.00 A.m. and directly headed to Sri Sri Radha Govinda temple. 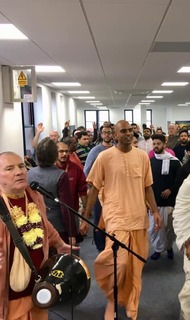 Birmingham is the second largest city in the UK with over 2 million jivas residing in human bodies. It is the most multicultural city in the western world, as only half of those human jivas are in white bodies. So it is a wonderful city for delivering the message of Lord Caitanya and now with our new temple in the city centre, next to the university, it gives us a fantastic opportunity to do just that. Great devotees have come from Birmingham in the past such as HH Subagh Swami and HH Bhakti Vrajendranandana Swami

Srila Prabhupada wanted Krishna Consciousness to be preached in Bangladesh. Preaching there is really risky, however, pure devotees take the risk. HH Subhag Swami has been continuously preaching in Bangladesh for the past 45 years. In the early days, Maharaj used to preach wearing a formal dress and take shelter at some Hindu family homes.

Spread over 700 acre ISKCON has decided to set up a 3000 crore (420 million US dollars) World Heritage centre at Mayapur , Nadia, birth place of Sri Chaitanya MahaPrabhu and spiritual headquarter of the institution. The construction of a 500 crore grand temple , Temple of Vedic Planetarium (TOVP) is the first step towards it. The temple is expected to be inaugurated in 2022 On Sunday morning , Mr Jindal along with other industrialists arrived at Mayapur on his private chopper at 11.00 am. They were warmly greeted and welcomed as per the Vedic traditions by senior devotees of ISKCON. <...