Spiritual Leadership and the ENRON Debacle 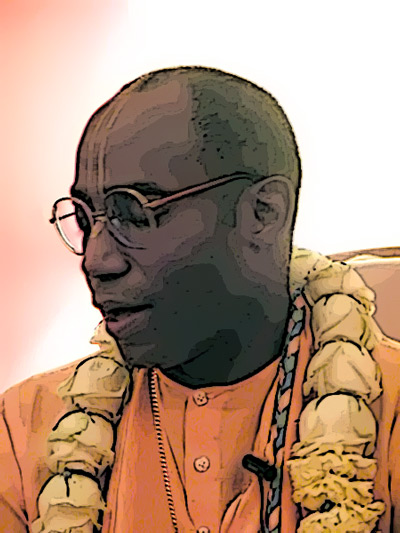 In the past year I wrote a book on the life and times of Bhakti Tirtha Swami, an ISKCON spiritual master and close friend who recently passed away after a prolonged battle with cancer. In researching the swami’s life, I found his perceptions of “spiritual leadership” to be among his most significant contributions. Although he lectured and wrote extensively on topics ranging from mysticism and bhakti-yoga (the science of spiritual devotion) to leadership in the modern age, it was this latter subject for which he primarily became known. Ken Shelton, editor of the professional journal Executive Excellence, said, “his work on leadership sets a new standard, expressly because it explores the spiritual dimension in ways that popular gurus like Stephen R. Covey, Kevin Cashman, and Ken Blanchard have not done.” And The Honorable Pierre Admossama, retired Director of the UN International Labor Organization, called the swami “an example in the truest sense of global principle-centered leadership.”

In essence, Bhakti Tirtha Swami’s teachings on leadership are based on those of the Vedic literature, harkening back to the principle-centered techniques of God-conscious kings, such as Maharaja Yudhisthira and Lord Rama. Basically, the techniques focus on ethics and morals, about putting the other person first, and about humility. Overall, it is leadership with God in the center, showing how to manage one’s kingdom, work environment, family, and life from a spiritual point of view. Since these principles were already found in the Vedic literature, what the swami really offered in his books were “modern technologies,” or practical applicative methods that modern readers could then use in their daily lives.

Having completed the book on his life several months back, I was pleased to revisit this concept of spiritual leadership while reading a recent issue of TIME Magazine (June 5, 2006). In an editorial about Enron, “the world’s leading energy company,” onetime Enron VP, Sherron Watkins, “blows the whistle” on an establishment that used to be her bread and butter.

But what could she do? History was already dubbing the Enron debacle as “the 9/11 of financial markets.” This is corporate criminality at its worst. Even while the company was going down, its leaders assured all involved that there was nothing to worry about — but thousands eventually lost their jobs, over 21,000 employees lost their pensions, and numerous investors were taken for a ride, ending up in the poorhouse.

In early 2001, it seems, Ken Lay and Jeff Skilling, Enron’s longtime leaders — and the leading criminals in our story — unveiled a new mission statement; they wouldn’t settle for being billed “the world’s leading energy company.” They wanted to be “the world’s leading company.” Period. They were fast-paced, inventive, and on their way up. And they had no scruples whatsoever.

Watkins met with Lay in August of 2001 to apprise him of Enron’s shady accounting and general deceitfulness in relation to its contemporaries. But her words fell on deaf ears. He already knew everything she told him, but was playing dumb. The organization was moving full speed ahead, even if countless people suffered as a result. That’s all he cared about. Here were leaders whose only principle was greed. For them, the principle of making money, it might be said, was principal.

With narcissism and fraud as Enron’s leaders’ only real legacy, they stand a long distance from the principle-centered leadership of Vedic monarchs, especially as espoused by Bhakti Tirtha Swami. In fact, Watkins articulated the problem much in the same way the swami would have, perhaps because of her Christian background. All spiritual knowledge comes from the same source, recognizes the same basic truths: “We want honest leaders,” she says, “who are decisive, creative, optimistic and even courageous, but we so easily settle for talk that marks those traits instead of action. Worse, we often don’t even look for one of the most critical traits of a leader: humility.”

Her words reminded me of Srila Prabhupada. Once, when a young hippie had attended a few Sunday feasts in the early days of the Krsna consciousness movement, he noticed that, when devotees became angry, they would say to each other, “Just chant ‘Hare Krsna.'” On one particular occasion, Srila Prabhupada was in attendance, and he had become angry about something. Seeing this, the young hippie naturally turned to Prabhupada and said, “Just chant ‘Hare Krsna.'” As the guru, Prabhupada could have become aggravated with the hippie; he could have ignored him, waving him off as little more than a nuisance. But, no. Prabhupada showed a wonderful sense of humility: he simply put his hand in his bead-bag and started to chant ‘Hare Krsna.” He knew the hippie was correct.

Another incident involves Srila Prabhupada at an airport, when numerous devotees came to greet him as he was about to board a plane. Apparently, his many disciples were blocking the aisles while enthusiastically chanting the holy name. To accommodate the airport custodians, who were having difficulty navigating their way around the devotees, one leading disciple stepped up on a seat and announced that all the devotees should move to one side. Upon hearing the announcement, the sea of of devotees shifted to a particular part of the lounge — including Srila Prabhupada. “Oh, you don’t have to move there, Srila Prabhupada,” said the devotee with the loudspeaker. “But I am also a devotee,” said Srila Prabhupada. This is humility.

“A humble leader,” wrote Watkins, “listens to others. He or she values input from employees and is ready to hear the truth, even if it is bad news. Humility is marked by an ability to admit mistakes.

“There is no humility in either Skilling or Lay,” she concludes. “By ‘taking care of himself,’ Lay violated one of Jesus’ leadership lessons, found in Mark 9:35: ‘If anyone desires to be first, he must be last of all, and servant of all.'” Krsna consciousness teaches nothing if it does not teach how to be a servant — a serant of both God and humanity.

This is Bhakti Tirtha Swami’s main thesis — that we must learn to value the “servant-leader.” In corporate lingo, it’s the one who clearly demonstrates that the interests of the organization and its customers, employees and investors come first, not his own. As Watkins says, “Humility is a critically important trait in leaders. We have to ask ourselves, Is our society cultivating humility? Do we exhibit that trait individually and collectively as a nation? Will we stop and learn from the Enron lesson in leadership failures, or will we just shrug our shoulders and thank God we’re not Ken Lay?” By following the example of Srila Prabhupada, we can learn to live according to principles and qualities that could have saved Enron. This includes humility, and so much more.