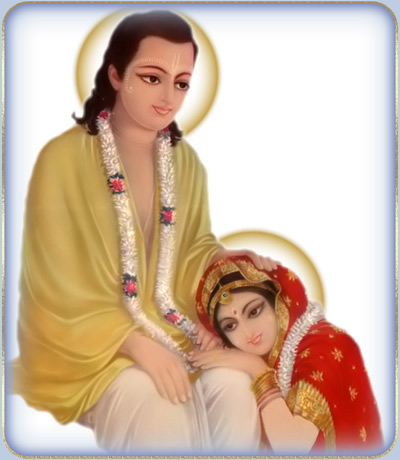 1. To answer the question: how can an associate of Lord Krsna be present in more than one associate of Lord Caitanya, anything is possible by the mercy of the Lord. Gaura Ganodesh-dipika (GGD) states that Lalita Devi appeared as Ramananda Raya, Druvananda Brahmacari and in Gadadhara Pandita.

Such multiple appearances may be due to the personal presence of an associate (saksat), or empowerment by his/her potencies (avesa)

2. However I have never heard it said that Visnupriya Devi is Satyabhama Devi.

However even though both Visnupriya Devi and Satyabhama Devi are thus expansions of the bhu-sakti, Bhaktivinoda Thakura indicates that at least Visnupriya Devi’s relationship to the Lord is more intimate than just being the earth goddess. He states that She is the Lord’s internal potency (hladini and samvit) and identifies Her as Bhakti Devi.(Jaiva Dharma 14)

The same intimate association may be implied with Satyabhama Devi, and hence Jagadananda Pandit.

Sometimes one personality appears in two bodies. A liberated living entity can extend himself to many forms like God. This I have heard from Jananivas prabhu. In this way Satyabhama can appear as Jagadananda and also Vishnupriya.

Or Satyabhama appeared as Vishnupriya and Jagadananda with the mood of Satyabhama?

Chaitanya Mahaprabhu is the combination of Radha and Krishna. At the same time Gadadhara is also Radharani.

Sometimes also two entities appear in one body. For example Haridas was Brahma and Prahlada. Either Swarup Damodara or Ramananda Roy also have two personalities together, Visakha and Arjuna?

Lord Caitanya and Lord Jaganatha were both present at the same time and They were both Krsna. Eternal associates of Krsna can also expand themselves in more than one place at the same time. Jagadananda and Vishu Priya had similar relationships with Lord Caitanya, but they were distinct personalites. I never heard of them meeting each other.

Garbage In Garbage Out

The importance of reading

10 Comments to “ More questions to the GBC”