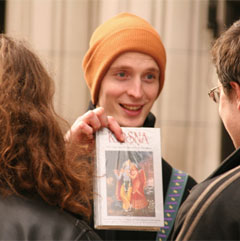 While there are many greats in this most pleasing service.  Heroes such as Vaisesika, Vijaya, Brighupati, Navida Nirada, and Parameshvara Prabhus.  There are others, great heroes, who dynamic feats go on unsung.   One such fellow is His Grace Bhakta Carl Prabhu, the biological brother of His Holiness Tamal Krishna Goswami.

Bhakta Carl Prabhu is an English Professor and Hinduism teacher in a university Iowa.  In his classes students have as a required reading the Bhagavad Gita As It Is and several other of Srila Prabhupada’s books.   He also uses other books as well.  In fact in the beginning of the semester students read, side by side, the Bhagavad Gita As It Is version of Srila Prabhupada, a very beautiful poetic version by a mayavadi impersonalist, a version by HH Tripurari Swami,  and a version by Graham Schwieg AKA Garuda das.   At the beginning of the semester students have their particular versions that they like.  Some like the poetic version, and some will also say that Srila Prabhupada is too heavy.   However at the end of the semester all the students prefer the version of A.C. Bhaktivedanta Swami Prabhupada, the Bhagavad Gita As It Is.   The students say that this version is the most logical and gives the most clear explanations.   Bhakta Carl Prabhu also every year brings his students, many of which probably never have even been out of the state of Iowa, to Vrindavan India to go on pilgrimage and learn from all the great devotees there. In my life I have distributed a good number of Srila Prabhupada’s books but I cannot say that I can make those books a required reading of the recipients.  I cannot imagine just how many books I would have to distribute to insure that a classroom sized group would study such books and new group semester after semester.  It is very glorious.  Such book distribution is in the line of another, little more well known hero, His Grace Radhika Ramana Dasa, AKA Dr. Ravi M. Gupta.

Radhika Ramana Prabhu is well known for entering the university at 13 year of age, becoming valedictorian of Boise State at 17 and receiving his PHd at Oxford at the age of 22.  His students at his university also have Srila Prabhupada’s books as a required reading.  His students are required to read important books such as the Sri Isopanisad, Srimad Bhagavatam, and the Bhagavad Gita As It Is.  All glories to these unsung heroes!