A Question Of Empowerment 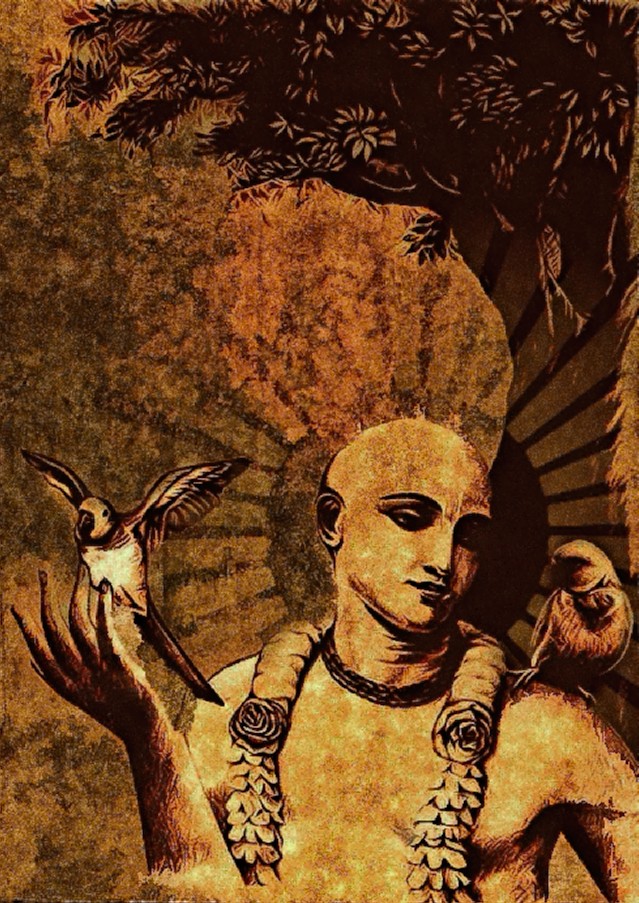 Are our abilities and expertise valuable assistance for our devotees? Are we confident that our positive-thinking techniques and service input is pleasing to all because devotees depend on us? Is satisfaction and contentment a common feeling earned through our ‘big’ endeavours and peer acceptance? Then beware, because we could be pleased for the wrong reasons – self-empowerment can be mistaken as genuine Krishna empowerment.

One can achieve all the above successes by NOT being very Krishna conscious, or hardly Krishna conscious at all. Certainly, Krishna fulfils all noble and spiritual desires. The service attitude may be genuine, but performed from a wrong base. Or they may be dependent on ‘big’ results for the sake of bigness – we are all different. To judge one devotee’s level of advancement based on ‘bigness’ or sheer ability is a mistake.

We all know that service in Bhakti is absolute. With the proliferation of expertise and ability, we can mislead ourselves into thinking that we can control and determine results in something that is unlimited – Bhakti. Iskcon has organisational requirements that need expertise and quality. If devotees fail to distinguish between self-ability and ability bestowed by the Lord, does it really matter?

Sri Chaitanya Mahaprabhu engaged expert vaisnavas in the spreading of Krishna consciousness. Srila Rupa and Sanatana Goswamis were examples. If any of us have the same level of material competence as they – or more – and we perform devotional service as they did, literarily and strategically, then what will the gulf of differences be between theirs and our services rendered?

One obvious difference will be the live sphurtis revealed within their hearts of Vraja-lila, recorded in their writings. Another is their level of empowerment granted by Sri Chaitanya Mahaprabhu. How does this empowerment come about? What is that base?

We all have an equal opportunity to be empowered, if that is what we want: “The Supreme personality of Godhead is not partial to some and neutral to others. One can actually draw the attention of the Supreme Personality of Godhead by service. Then one is further empowered by the Lord to act in such a way that everyone can appreciate his service. (CC Antya 1.197 purport)

One of the symptoms of self-ability service is that we expect immediate results, and dramatic ones at that. If a group of devotees put on a Ratha-Yatra festival for instance and become despondent because of low public turnout, or that nobody committed to becoming devotees, then they are relying on their own abilities and expectations instead of the Lord’s abilities and expectations.

The devotees should be thinking in terms of “planting the seeds” for future possibilities which lie in the Lord’s hands. These long-term outcomes are usually full of surprises and outfit our three dimensional schemes. Yet, someone like Srila Prabhupada did produce instantaneous results. Where does the difference in empowerment lie?

Devotees generally try their best to please and will put in many hard, long hours of service. This can earn some empowerment: “If one tries to render his best service to the Lord, the Lord gives him the power to do so.” (CC Antya 1.197 purport)

This power may carry what we lack and preserve what we have, and achieve remarkable results. But what about real empowerment that can make a dumb man speak eloquently or a lame man cross over mountains? Here we are delving into realms of impossibility, in a normal sense.

Sometimes devotees can experience this. By preaching to a very stubborn individual, we may notice a sudden change of heart in him or her that we can only attribute to Krishna’s mercy and power. In between however, we might also silently give credit to ourselves and for our own ability to make this happen. This is still far from real empowerment. We are not our abilities, Krishna is.

This is partial or mixed empowerment and it does not count as pure devotional service. It would be useful to know this difference when embarking on self-empowerment or positive thinking schemes to help us improve our Krishna consciousness. These are useful for organisational and devotee relationship help and general anartha-nivritti cleansing, where material competence can improve.

The problem is that these techniques can make us think that we are the ability, which again is off base. We all need to plan and be goal orientated in Krishna consciousness, so while we can utilise what is helpful, it would be off base to take them as the means to an end, because after a certain stage of devotional attainment, these will fall away on the inner cultivation of Bhakti.

Self-empowerment can cause us to be contented when we should not be. If devotional service is unlimited then how can we truly achieve devotional goals with self-effort? How can we ever feel contented in our chanting of Hare Krishna if the names are unlimited? Self-effort promotes the idea of achieving limited goals within an unlimited realm, which is delusional.

But still, while the inner cultivation goes on, there is much to do for Iskcon in organisational purposes. The word ‘empowerment’ can be used loosely and cheaply or out of place. It can cause us to equate empowerment with empowerment of a genuinely different nature, which is why it does matter to distinguish pure from mixed empowerment. Otherwise, raja or passionate devotion predominates, or we can gradually get infected with an impersonalist mayavadi concept that anyone and everyone is empowered.

Srila Prabhupada says this of those great souls who actually cause genuine transformation of the heart: “The Kṛṣṇa consciousness movement is spreading to enlighten people about their real position, their original relationship with Kṛṣṇa. One requires Kṛṣṇa’s special power in order to be able to do this.” (CC Madhya 19.114 purport)

By analysing the difference between mixed or self-empowerment and genuine empowerment, we can understand that real empowerment is not so cheap. What is that base of empowerment? Here is a clue: “An empowered devotee sees and feels himself to be the lowest of men, for he knows that whatever he does is due to the inspiration given by the Lord in the heart.” (CC Madhya 19.135 purport)

The power to achieve comes from ‘down there,’ as it were. How far down? Yes, lower than even a straw on the street. Is this so obvious? No, not if we consider that way down there is where Krishna actually is. How so?

If Krishna Himself cannot fully understand the length and breadth of His own holy names, of His form, of devotion unto Himself, and of Srimati Radharani’s love for Him, then how can we? But with the wealth of zero base, we can somehow be a part of serving the Lord in devotion.

When Srila Krishna Dasa Kaviraja laments that he is lower than a worm in stool, he is speaking from an unlimitedly powerful and wealthy base. It is unlimited down there, which is actually being way up there among the rare greats of devotion. Srila Rupa and Sanatana Goswamis had straw between their teeth upon meeting Sri Chaitanya Mahaprabhu, which earned them the ultimate in Bhakti and knowledge empowerment wealth.

If we read Srila Prabhupada’s poems that he composed before setting foot ashore America, the same utterly helpless mood prevailed in him, that he was invested with all wealth of empowerment. Incidentally, some say that Srila Prabhupada was empowered by Sri Nityananda at that time.

Being lower than the straw in the street, more tolerant than a tree, devoid of all sense of false prestige and offering all respect to others enables empowerment to be able to chant Hare Krishna constantly, and this is from nishta onwards. Isn’t the chanting of Hare Krishna the basis of all of our services rendered? This zero base is the highest base from where to serve.

Self-empowerment does not fit in to this wealthy and powerful zero base because self effort cannot compete in strength and purity of purpose. Self-empowerment belongs more to the “unfortunate” feeling that Lord Chaitanya has about not having a taste for chanting Hare Krishna, in verse two of Sri Siksastakam, which represents anarthas-nivritti. This is where some self-empowerment and effort is useful.

Having understood the differences, we can better perform our services in a healthy mood of being perennial under-achievers in devotion. This is the mystery of having got it, yet not ever getting enough of it, and hence always feeling devoid of it. If we cannot grasp the unlimited then neither can we ever do enough in devotion to reach perfection, although perfection may already be attained. This induces our dependence and helplessness, which in turn makes us beg for spiritual strength to serve onwards. This is real goal setting and empowerment.

It is all due to Sri Guru, Srila Prabhupada and all previous acaryas that all their inspired realisations and revelations can be pieced together in an attempt to serve.

ISKCON In Macedonia (Album of photos)
Lost Soul and the GPBs, part two

7 Responses to “A Question Of Empowerment”