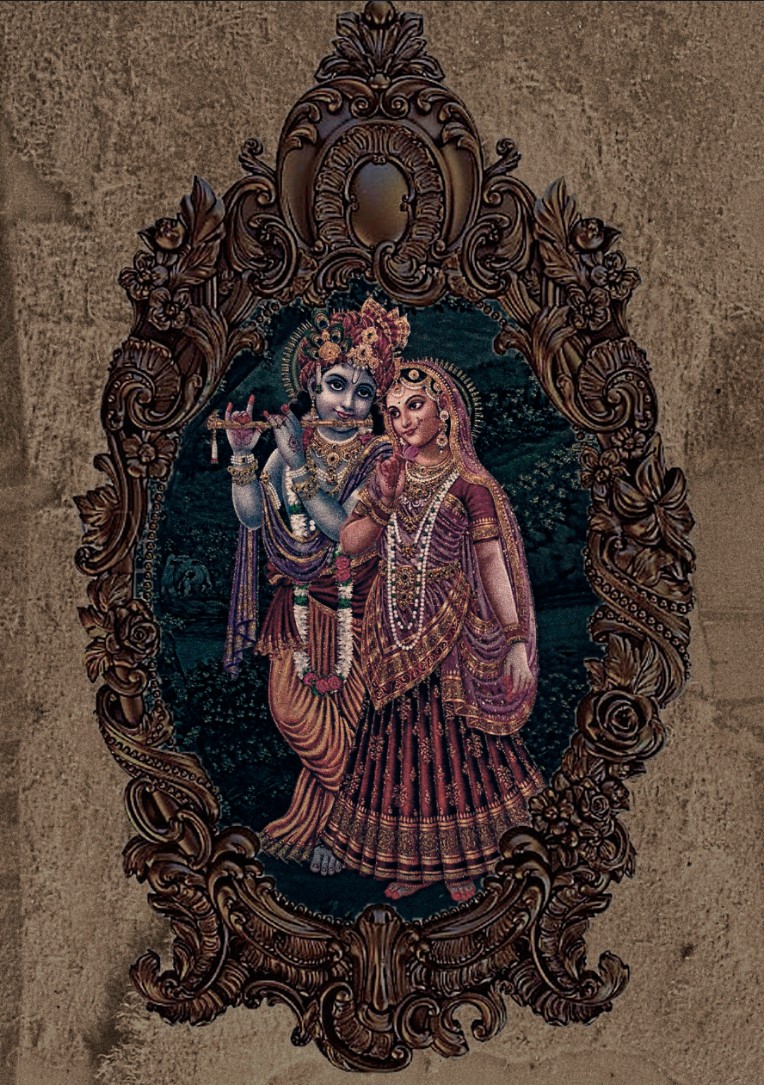 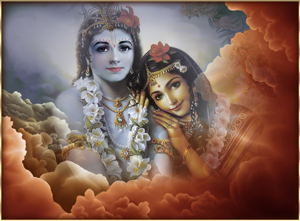 An early offering for Radhastami.

Srimati Radharani, the tenderhearted, feminine counterpart of Godhead, is that one person in all of existence who knows best how to express love for Krsna. She is the supreme container of love for Him, and, as such, She is known as the asraya category. Moreover, it is She who, like a mother, nurtures us in our devotional service.

Krsna, the object of Her love, comes once in a day of Brahma to display and enjoy His pastime mellows. Afterward, however, Krsna was left with three unfulfilled desires, and to fulfill those inner longings is the paramount reason for His return as Sri Caitanya Mahaprabhu.

Srimati Radhika is the unique, munificent cause of those unfulfilled desires of Krsna. In this way Vrishabhanu-nandini is establishing the greatest welfare for Him……..and for all His uncountable jivas.

In order to recognize those desires, we remind ourselves that transcendental ecstatic bliss is called bhava. When bhava becomes condensed, it is called mahabhava. Srimati Radharani is highly concentrated ecstatic bliss, mahabhava, in person.
Krsna, of course, is also tasting bliss. Indeed, He tastes the bliss to which He is entitled as the object of Her love. However, He is noticing that the abode of love, Srimati Radharani, the asraya category, is tasting bliss ten million times greater than His! Radharani was feeling more transcendental pleasure in the company of Krsna than He could understand, and He wanted to experience those blissful emotions for Himself. However, for Sri Krsna to enjoy in the position of Srimati Radharani was impossible, because that position is completely foreign to Him. Krsna is the transcendental male, the masculine counterpart of Godhead. Radharani is the transcendental female, the feminine counterpart of Godhead. As a result, Krsna cannot fulfill His desire unless He Himself actually takes up the position of that Asraya category. Therefore, in order to experience the blissful emotions of Srimati Radharani, and feel the pleasure of the asraya category, Lord Krsna appeared as Sri Caitanya Mahaprabhu.
Now, in addition, there is a continuous competition between Srimati Radharani and Lord Krsna to see who can most increase the intensity of the love which they have between them.

Therefore, Srimati Radharani and Her maidservants decide to help Krsna by setting up a school for Him at Radha Kunda. Radha is the Chancellor of this incomparable school, while Lalita and Visaka are the principal department heads. It is with their help that the only student, Lord Krsna, is then able to study with all those sakhis who are the personified mental activities of Srimati Radhika.

When the study course is finished, it is then time for Krsna to take His final exam, which is administered by Srimati Lalita Devi. Krsna passes the exam.

However, Lalita informs Him that this diligent academic learning is not enough. If He really wants to fully appreciate Radha’s mental attitudes, then practical experience will also be required.

Again, this experience is not possible unless He actually takes up the position of the Asraya category. Radharani’s attraction for Krsna is sublime, and to experience that attraction and understand the transcendental sweetness of Himself, He must personally accept Her mentality. Consequently, in order to fully appreciate the mental activities of Srimati Radhika, He comes as Sri Caitanya Mahaprabhu.

Krsna is the personification of conjugal beauty. At one point, in Dwaraka, He sees the beauty of His own reflection in a jewelled fountain. At that time He says, “My mind, bewildered upon seeing this beauty, impetuously wants to enjoy it in the same way that Srimati Radharani enjoys it.” Lord Krsna’s beauty attracts Lord Krsna Himself. However, because He cannot fully enjoy it, His mind remains full of sorrow.

Therefore, in order to relish His beauty the way that She does, He takes up the position of the Asraya category, accepting the emotions and bodily luster of Srimati Radharani, and comes as Sri Caitanya Mahaprabhu.

Thus, the primary cause for Krsna’s descent as Sri Caitanya Mahaprabhu was to taste the above three moods of Srimati Radhika, which only She could taste. He therefore borrowed Her internal mood and beauty, and became tadatma with Her. By becoming tadatma with Radhika, He forgot that He is Krsna, and could taste as She does.

Some correlative details appear in a nectarian history told by His Holiness Gour Govinda Swami. This story reveals the origin of the final verse of the Sri Siksastikam:

One day Srimati Radharani had nicely decorated the kunja with the help of Her maidservants. With great anticipation, they are expecting Krsna to come and arrive at the planned rendezvous time. However, Krsna does not show up. They wait and wait, but still no Krsna. Radha is beginning to go into Her sulky mood, and also beginning to cry, so a messenger[dyuti] is sent out to find Him. Along the way, the dyuti encounters one of Candravali’s servants who pleasurably reports that Krsna is over there in that kunja. When the dyuti returns, she of course gives a prompt report to Lalita and Visaka, who in turn relay the news to Srimati Radharani. At that point, Radha’s leftist sulky mood reaches it’s peak, and She forbids that Krsna can enter Her kunja. And She is crying, crying, crying.

Radharani says, “I don’t want Krsna to come. Don’t allow Him to come to My kunja. Entrance is forbidden!”
When Krsna finally does arrive some time later, Lalita and Visaka are standing guard at the entrance, and stop Him. They block His entry and sharply tell Him to “Get out of here”. He pleads for entry to the kunja, but there is no permission. Visakha, who is harder than Lalita, is especially tough on Him at this point. He must turn away and leave.

So Krsna went away to the banks of the Yamuna. Morose and disappointed, Krsna could not understand what to do. He had gone to Candravali’s kunja only to heighten the leftist mood of Radhika, the mood which brings Him so much pleasure. He wanted an opportunity to have Her association while She was in that heightened leftist mood, but His plan firmly backfired. Now, what to do, what to do?

In the meantime, Vrndadevi learns of Krsna’s predicament, so She comes to Him with a solution.
She tells Him that He must completely change His appearance, take up the position of a begging Sannyasi, and sing a special song. She tells Him that He must get rid of all that black hair and shave His head, discard the dress of a cowherd boy and wear sannyas cloth, refrain from the 3-fold bending form, give up the flute and the peacock feather, and learn the song that She will teach Him,…. and then there may be some hope.

When Vrnda said this, immediately that form appeared there. Krsna became that sannyasi form–shaved head, and His complexion was of molten gold. No peacock feather, no flute, no three places curved form. In sannyasi form He immediately appeared there. Vrnda then taught Him to sing a beautiful song in glorification of Radha, the last line of which is, “Today Kanu, Krsna, is moving from door to door begging radha-prema, radha-prema, radha-prema”.

So Krsna, singing, goes back to the kunja where Lalita and Visaka become very happy to see such a blissful sannyasi singer, and very happy to hear such a wonderful song. When they ask Him what He wants, The sannyasi answers, “I have nothing, I am a beggar. I’ve come here to get radha-prema, radha-prema. I am a prema-bhikhari. I am a beggar of prema.”
So Visakha takes the sannyasi into the kunja. She requests Him, “Will You please again sing that nice song You were singing before?”
Then Krsna sang that song in glorification of Radha. “Today Kanu is a bhikari, He is a beggar, moving from door to door begging radha- prema.”
When Radharani heard that last line, She responded thus:

Her response to this song is what we know as the final verse of the Siksastikam. It is the expression of a very deep mood of Srimati Radhika.

Soon after, the sannyasi obtains the audience of Radhika, and upon seeing Radha, immediately Krsna’s form came, tri-bhanga-lalita. That sannyasi form disappeared.

Visaka was absolutely amazed. She says, “What is this? At first I saw You appear like a sannyasi, but now I am seeing You as Syamasundara, the cowherd boy. I saw You appearing as a golden doll, with Your entire body covered by a golden luster. I now see You holding a flute to Your mouth, with Your lotus eyes moving very restlessly due to various ecstasies.”

Much later, in Caitanya lila, Visaka appears as Ramananda Rai. At one point, Lord Caitanya shows Ramananda Rai His Syamasundara form, and what happens? Ramananda faints. Why? As Visaka, He saw the metamorphosis of a Golden Sannyasi to the form of Sri Symasundara, and lo and behold, now again He sees this same transition! He faints.

Radharani was crying, and after the sannyasi reveals Himself to be Krsna, Visakha states, “One day You’ll have to cry like that!” And that day comes at the Gambhira when, as a Golden Sannyasi, He is crying in the form of Sri Caitanya Mahaprabhu. Not only that, but Visaka [Ramananda] and Lalita [Swarup Damodara] are there to help Him understand how to cry……..just as Srimati Radhika cried.

In order to study Radharani, Krsna lived in Her role and tried to understand Himself. This is the secret of Lord Caitanya’s incarnation.
Thus, the paramount internal reason why Krsna comes as Gaura is to understand the Glories of Her Love for Him.
The second reason for His descent is to bring with Him a wonderful present for this world. It is a special gift which is nicely explained in the famous verse below:

”May that Lord, who is known as the son of Srimati Sacidevi, be trancendentally situated in the innermost chambers of your heart. Resplendent with the radiance of molten gold, He has appeared in the age of Kali by His causeless mercy to bestow what no avatara ever offered before – service to Srimati Radhika as Her confidential maidservant.”

This verse is the mangalam caranam for the entire Sri Caitanya Caritamrita, and everything in that book appearing after it is there to explain this verse.

Srimati Radhika has a very ecstatic mood: “I want to become a dasi of that person who can please Krsna the most. I will become her maidservant”. This mellow is Radharani’s beautiful mood.

This mood of Radhika has taken so many forms——Rupa Manjari, Rati Manjari, Labanga Manjari, Kasturi Manjari…….. Radhika’s beautiful mood became so many different milkmaids. However, these particular maidservants of Radhika have only one mood…….that it is Radhika Herself who should meet with Krsna…….because it is actually She who can please Krsna more than anyone else. It is She whom they want to serve. That propensity is called unnatojjvala rasam sva-bhakti- sriyam—the beauty of Srimati Radharani’s mood, otherwise known as manjari-bhava.

Now, when Krsna becomes influenced by the compassionate, tenderhearted mercy of Radha, He develops a desire to bestow upon all jivas the highest mood of love for God that can be given, which is the service mood of the manjaris.