The pen is mightier than the sword 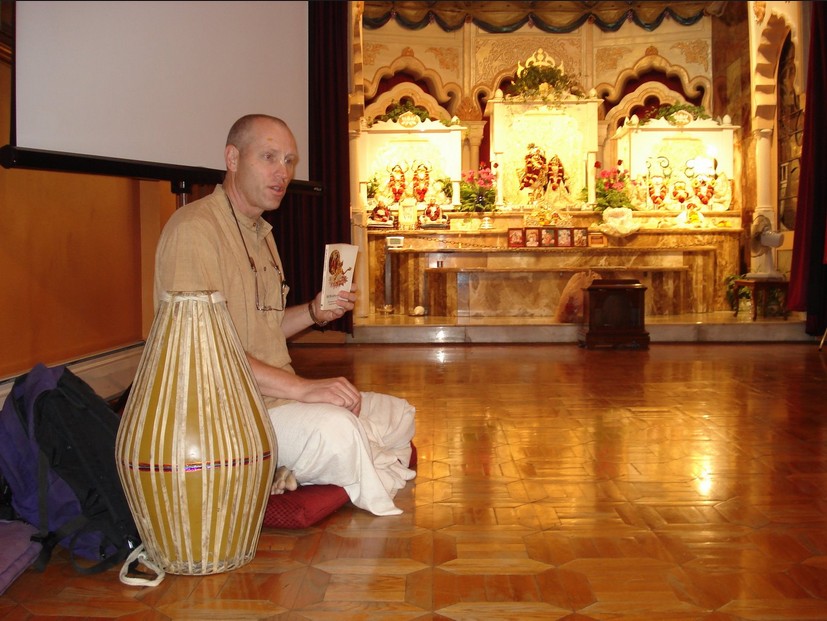 Journalist Thomas Paine in 1776 sparked the American Revolution by writing and widely distributing his pamphlet, Common Sense. Fidel Castro – while in a Cuban prison – crafted his speech History will Absolve Me, had it smuggled it out of the prison and distributed to the masses. The result? The Cubin public overthrew the government and installed Castro as their leader.

And for thousands of years, our own acaryas have invested their time and energy to write and publish transcendental literature meant to “create a revolution in the impious lives of the world’s misdirected civilization.” (Srimad-Bhagavatam 1.5.11)

Krsna-dvaipayana Vyasa expanded and first wrote down the Vedas so that they could be distributed to the fallen masses in this Age of Kali. The six Gosvamis, Krsnadasa Kaviraja, Baladeva, Visvanatha, Narottama, and other empowered followers of Lord Caitanya, produced books, commentaries, and songs meant to open the darkened eyes of the conditioned souls.

More recently, Bhaktivinoda Thakura not only wrote prolifically but also distributed his books personally, sending them to scholars throughout the world. He also created the Marketplace of the Holy Name to infuse the masses with the holy name and the teachings of Lord Caitanya.

Following in the Thakura’s footsteps, his son Srila Bhaktisiddhanta Sarasvati and his own disciples wrote and distributed books all over India. Srila Bhaktisiddhanta purchased printing presses and even made a special altar for one of them, placing it next to the Deities’ altar in the temple to show that it was a divine instrument.

Srila Bhaktisiddhanta Sarasvati encouraged his followers to distribute books, saying: “As soon as a single person will have conceived the sincere desire of undertaking the promulgation of the tidings of the Gaudiya literature to the peoples of this world, he is thereby enrolled among the agents of divine mercy with power to forward the fulfillment of this expressed wish of the Supreme Lord.” (Sri Bhaktisiddhanta Vaibhava; vol 1 p. 295)

Is it any wonder, then, that ISKCON’s Founder/Acarya, Srila A.C. Bhaktivedanta Swami Prabhupada, who strictly follows the mood and methods of his predecessors, writes in his Srimad-bhagavatam commentary: “In our Krsna consciousness movement, all our activities are concentrated upon distributing Krsna literature.” (SB 10.2.37)

Book publication and distribution is our family business, and those who engage in it perform service to the great souls. Srila Prabhupada writes: “Your report of book sales is over encouraging. You are all becoming very, very dear to my Guru Maharaja.” (SPL to Ramesvara Prabhu, 3rd December, 1975)

Serving great souls qualifies one to relish krsna-katha. (SB 1.2.16) And Srila Prabhupada also writes: “By fully concentrating on distributing books for Krsna, one is fully absorbed in Krsna. This is samadhi.” (SB 10.2.37) For these reasons and many more, book distribution is high sadhana.

Living beings in the material world are asleep to their real identities. Absorbed in a bodily conception of life, they suffer perpetually until touched by transcendental knowledge.

Due to modern technology, beautifully produced BBT books are available throughout the world in dozens of languages. Follow in the footsteps of the great acaryas and distribute them. Doing so is the best service to all living entities.

One needs no special occasion to distribute books. But in case you might have been waiting for one, the month of December is traditionally a great time to distribute. This year, Sunday, December 23rd, marks the day Krsna spoke the Bhagavad-gita. And December 15th is World Enlightenment Day, the day devotees all over the world go out to distribute Srila Prabhupada’s books.

Just do this for your own purification and don’t worry about the result. Srila Prabhupada implores us to just try. And just by trying you will get “superior strength and knowledge in Krsna consciousness.”

Srila Prabhupada: “I can simply pray that you shall try to understand more and more about this transcendental science, and, whenever possible, try to talk about Krsna consciousness to your friends or whomever you may meet. Simply by this attempt you will get superior strength and knowledge about Krsna consciousness. It doesn’t matter whether a man is convinced or not, but your sincere attempts to convince others will help you progress. (Letter to Dayananda, April 29th, 1968)

Chanting 16 rounds Hare Krishna must give result if properly executed

How to Celebrate Janmashtami

Radha Kunda tilak – Bonafide or not?