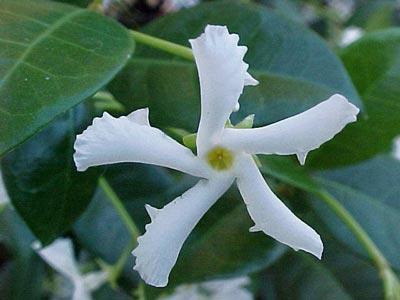 One evening while in his New Dwarka garden, Srila Prabhupada looked into the sky and said, “So, is the sky the color of Krsna?” A disciple said, “In Krsna Book it says that Krsna is dark bluish like the thunder cloud.” Srila Prabhupada said, “The sky is the color of Krsna. It is the light from Krsna’s bodily effulgence that makes the sky blue.”Sometimes after leaving the garden, he would go back to his room and listen to the recording of that morning’s Srimad Bhagavatam class. Then he would have me pick night blooming star jasmine growing on the bushes just outside his garden. The flower’s scent is especially fragrant at night. One evening while holding a sprig of blossoms up to his nose for several minutes, he said, “Ahh, this is Krsna!” Often times I would bring them to his bedroom just before his evening massage. Throughout his massage he would smell them off and on. He would then keep them on His pillow (close to His nose) all night. The following morning, I would find the flowers gently laying on the pillow exactly where they had been the night before. The flowers looked as fresh and fragrant as ever, looking as if they had just been picked. His Divine Grace is always showing us how Krishna is in every part of this material creation.

Boxing with the mind. Boxers meet in a ring and fight each other…

TOVP: Final view of the Kalash without the scaffolding (Album…