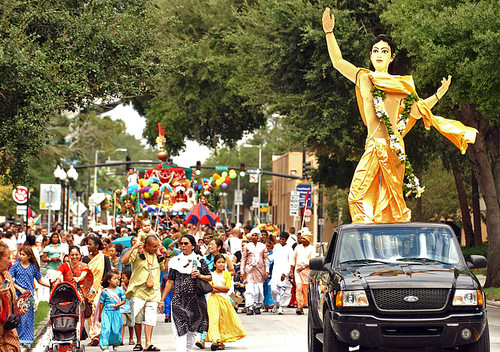 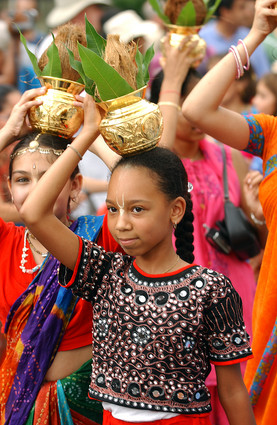 Krishna devotees had much to celebrate Saturday as hundreds held their first-ever Festival of Chariots in downtown Orlando, turning Lake Eola’s surroundings into a kind of “Little India” for several hours.

Crowds gathered for the Ratha Yatra, as the Hindu feast is called, to honor Lord Jagannath, also known as the god Krishna. According to lore, the Festival of Chariots is celebrated in Puri, India, to honor the god’s return to his hometown, Vrindavan, more than 5,000 years ago.

For many revelers, the Saturday feast was an opportunity to come face to face with the deity. Others participated in the event, which included drama, crafts and vegetarian food, to get a taste of India in Central Florida.

“We’re very fortunate to come here . . . and participate in the cultural events,” said Pramod Gurshaney, who helped organize the feast along with members of the Ratha Yatra Association of Central Florida. “For people who are second or third generation [American], this is like being in India for half a day.”

Each year, statues of Jagannath, his sister Subhadra Devi and elder brother Baladeva are placed in their own chariots and pulled through the streets of Puri in an event that attracts millions of pilgrims.

In Orlando, however, one colorfully decorated cart carried all three. Followers held ropes attached to either side of the chariot or touched it with hope that they would receive blessings.

“Ultimately, this is about salvation,” said Capildeo Jadonath, 44, a doctor who drove from Ocoee with his family to attend. “It’s a tremendous sacrifice; you’re using your strength, your energy on behalf of the lord for the sake of mankind.”

A group of women wearing brightly colored saris walked with coconut-filled, gilded urns on their heads. Others drummed, played cymbals and chanted the Hare Krishna mantra as they jumped in the middle of the street.

“I love the music. I love the chanting and the jumping,” said Jasodra Castandi, 62, of Orlando, as she watched the procession. “Those are my favorite parts.”

Ratha Yatra festivals were introduced to the United States in 1967 when A.C. Bhaktivedanta Swami Srila Prabhupada, founder of the International Society for Krishna Consciousness — also known as the Hare Krishna movement — asked his followers in San Francisco to celebrate the event. The Hare Krishna movement and Hinduism both have roots in the ancient Vedas and Bhagavad-Gita texts. Hare Krishna devotees regard Krishna as supreme over the other deities in the Hindu pantheon.

Today, Ratha Yatra festivals are celebrated throughout the world, with Hindus and westerners alike sharing in the feast.

Norma Giraldo, who was born in Colombia and became a Hare Krishna, said the faith’s teachings appealed to her because her Catholic religion “did not provide all the answers.” On Saturday, she attended with several Hispanic friends.

Claudia Zequeira can be reached at 407-931-5934 or czequeira@orlandosentinel.com