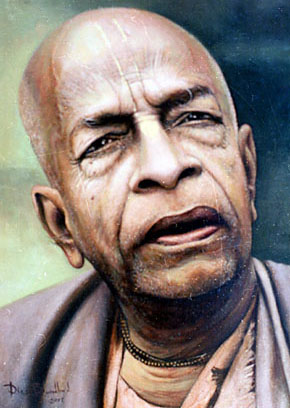 Srila Prabhupad’s first disciple is Acharya Prabhakar. I believe he is still alive. Srila Prabhupad had lived with him in a single room for over three years in Jhansi. They talked all the time and note this, in Sanskrit. Referring to this disciple Srila Prabhupad told me “he speaks Sanskrit better than we can speak in English, he is that expert. Perhaps he is the greatest Sanskrit scholar in India”. I knew that Prabhakar had disappointed Srila Prabhupad, and I could see from his face and attitude that something big was missing from his spiritual life. Imagine having had the opportunity of being day and night with Srila Prabhupad for three years. Somehow despite this golden chance, had never quite gotten who is Krishna, but he had great respect for Srila Prabhupad. Srila Prabhupad encouraged Prabhakar to cooperate with me. Even we were discussing to move our temple to his center in Kirti Nagar. I was hesitant, knowing that it would be difficult to keep Acharya’s maya of philosophy out of the arena. I considered that after all he is Indian and I am a westerner, it would generally be thought what can a western man know of Krishna. But besides that he is a very great scholar of the Vedas, one of the absolute best in India, a brilliant speaker and a very famous man. Side by side I would be ignored and he would be the authority. This was not ego but simply a reality and a desire to protect the purity of Srila Prabhupad’s words.

Srila Prabhupad wrote him to work with “my secretary, Tejiyas das, who is now residing in Delhi”. In fact Srila Prabhupad wrote him a few letters, always with copies to me. So I picked up Srila Prabhupad cue, and depending upon Krishna, started spending some time with Acharyaji, but always being cautious. We had a nice center in Delhi with a special room designed by Srila Prabhupad with rugs and chairs bookcases all around the room. People could come with shoes and sit and the speaker would stand behind a podium that was up on a stage.

I had an idea. Srila Prabhupad at our pandals used to have a famous guest speak, and then one of his disciples and then Srila Prabhupad would comment on what we both said and take it to pure Krishna consciousness. Acharya Prabhakar was (and still is) very famous and was willing to follow my guidelines and because of, or perhaps despite of, his vast learning he did after all know the Krishna conscious philosophy. Thus with due reflection I had him give a short introductory talk to my lecture.

On Srila Prabhupad’s next visit, as usual, he had me discuss with him, amongst other things, the latest news and activities and preaching work. So knowing that he was anxious to have me take the cooperation of Acharyaji and engage him in service, I related what had happened. The response:

“No. Why did you let him speak? He is not following. You should not let him speak. Just like in the Gauri Shankar Mandir in Chandni Chowk, there are so many professionals who speak on the Ramayana. But because they are not following, people come and listen and go away with out change. It has no effect. But you, are following little, therefore when you speak there is some effect. No, do not let him speak.”

As Srila Prabhupad spoke to me I at once understood that here is a chance for me to be receiving great and important instruction from this truly great person, this great devotee of the Lord. So I listened, without argument or debate, at once agreeing and putting all my effort and concentration into understanding his words. I was impressed how though Srila Prabhupad indirectly said words that could be considered praise, but that he carefully worded his statement as: “following little” and “some effect”. In a sense this was a very gentle rebuke that I was not following sufficiently and thus there was not a great effect. This also helped me to try keep my ego as small as possible in front of Srila Prabhupad and to avoid taking what could be considered praise and get more puffed up. One should never become proud by the encouragement of the Spiritual Master. One should become more humbled. In one way all the reasons I have given above about why I had Acharya Prabhakar speak are in fact correct. In many other incidents Srila Prabhupad, as you will come to know more and more, chastised me about my lack of ability to reform others. It was in that spirit that I was trying to engage Acharyaji. I was trying to pick up the cues from Srila Prabhupad to also gain his cooperation. So although technically it is true that I could consider that I was not at fault, I did not argue or further present my reasons. All those reasons were well know to Srila Prabhupad. He himself had orchestrated my working with Acharyaji. He himself had engaged other speakers to give introductory talks. What was the need for me to mention these things to Srila Prabhupad who is millions of millions of times more aware than myself? I simply tried to take Srila Prabhupad’s correction with great and serious gravity, bringing it deep into my heart, hoping that I someday in the future might understand and improve, just a little more, be a little bit better servant and just begin to learn the art of reforming others and myself.

One Response to “A short story”