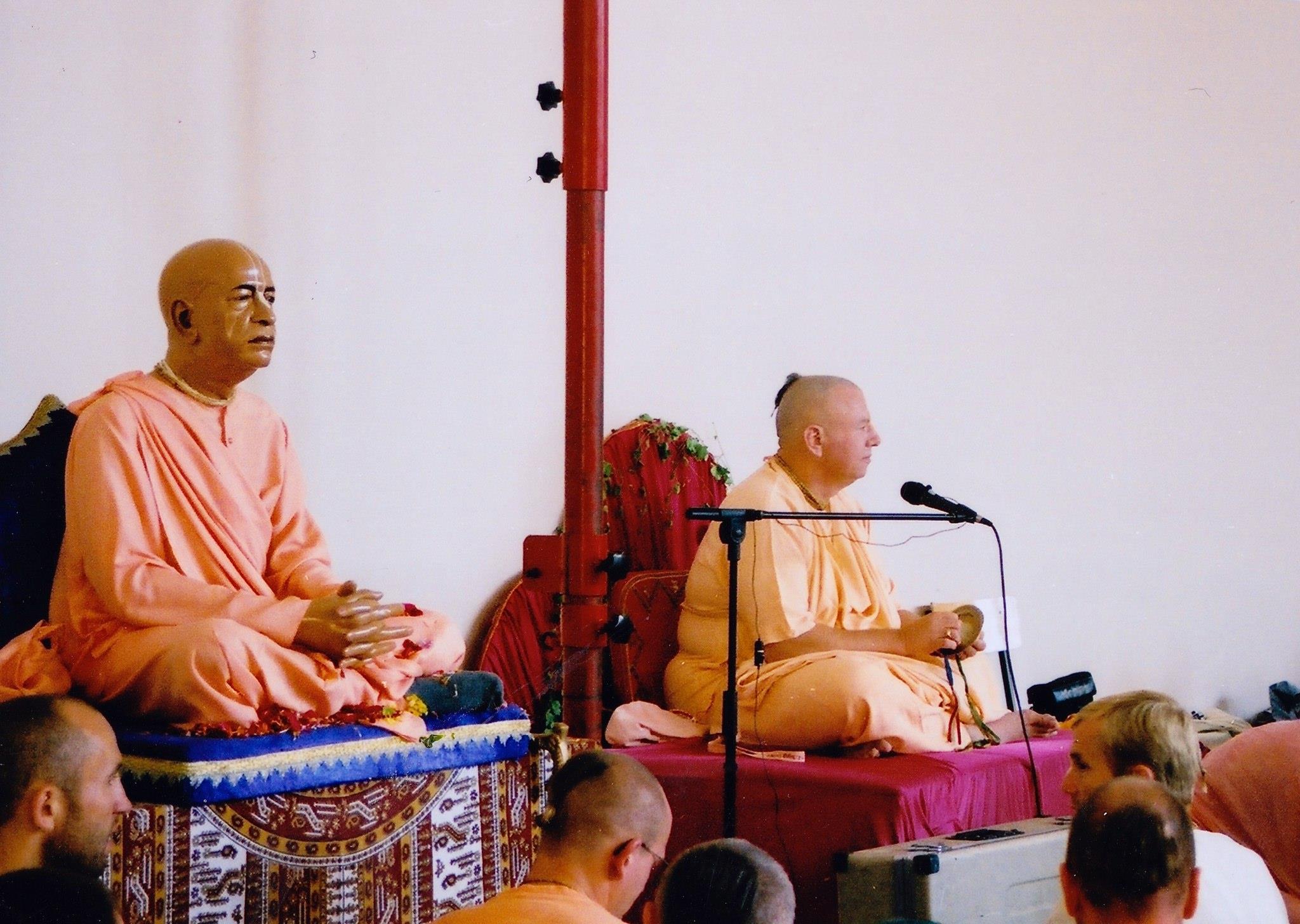 The Mayapur Temple of Vedic Planetarium (TOVP), under construction, recently opened an office in the ISKCON Juhu temple, at Hare Krishna Land in Mumbai. In honor of the occasion, and to further the cause, I thought to share an excerpt adapted from my article “Memories of Sridhar Swami” in my book Many Moons.

In November 2003 Srila Prabhupada’s staunch disciple Sridhar Swami phoned me from Bombay and told me that he was planning to go to Vancouver in April for four to six months. Soon thereafter, however, he sent an e-mail saying that he had been diagnosed with liver cancer and was going to Vancouver immediately to see if he could get a liver transplant, which was his “only hope.”

In Vancouver the tests revealed that his cancer had spread beyond the limit allowed for transplants, and so his “only hope” was dashed, and it seemed like he was soon to leave his body.

I phoned Maharaja from Santa Barbara and eventually got him on his cell phone. “Where are you?” I asked. “I’m shopping,” he answered. He seemed so jolly—like always. But then he confirmed my worst fears: “The doctor says that I could go at any time. Phone me back later. We have to talk.”

He had three desires, he said: “I just want to survive until I reach Mayapur. Then, if possible, I want to live to see the Pancha-tattva installed. And then, if possible, I want to live until Gaura-purnima. And then—whatever.” (He meant, of course, “And then—whatever Krishna wants.”) No one knew how much travel Maharaja’s weakened body could bear, but with these three desires in his heart, he flew to London and then to Kolkata, and eventually he arrived in Mayapur.

I wanted to phone Maharaja every day, but the way it worked out with the time difference and all the difficulties in just getting through to Mayapur, we managed to speak only every third day or so. The last time, two days before he left, he was having a good day. The previous day had been a bad one, but the night before, they had given him some additional medication. So when I spoke with him that last time, he was having a good day, and we had one of the best talks I have ever had with anyone in my entire life. We spoke mainly about the Mayapur project and Srila Prabhupada’s mission. I’ll cherish that talk—the experience of it and the lessons it contained—for the rest of my life.

That was Thursday, March 11. The next day, Friday, we installed beautiful brass Deities of Gaura-Nitai in our Carpinteria ashram. They had come from Vrindavan, originally commissioned by Mother Kirtida for Tamal Krishna Goswami. I felt that Their coming was also part of Sridhar Swami’s mercy, because he so fervently desired that the glories of the Pancha-tattva be spread and that we build the great temple for Them in Mayapur. So, two representatives of the Pancha-tattva had come, and I felt that Their arrival was his desire.

On Thursday I had told Maharaja, “I don’t know if I will be able to phone you again before then, but the Deities have come and we will install Them Friday evening, and by your mercy we’ll try to serve Them and Their dhama.” And now, whenever I look at Their beautiful forms and appealing faces, I feel that we have to do something for Them—we have to build Their wonderful temple, as Sridhar Swami always reminded me.

This may have been Maharaja’s main contribution in recent years, at least to me in my service: He impressed upon me—and upon our entire movement—the importance of the Mayapur project, of the “wonderful temple” (adbhuta mandira) that Nityananda Prabhu had desired for the service of Chaitanya Mahaprabhu, and that Bhaktivinoda Thakura had envisioned. Maharaja’s whole life was dedicated to Srila Prabhupada, and I think he felt that this was one of Srila Prabhupada’s main desires left to be fulfilled. And he felt that we had to do it—and that we had to do it; it would benefit the whole society, and the whole world. He would quote Ambarisa Prabhu: “This will be the tide that will make all the boats rise.”So, although Sridhar Maharaja left so many wonderful legacies for us in terms of his personal qualities and activities, I think one legacy that may serve to unite the movement and fulfill one of Srila Prabhupada’s main desires is his inspiration to push on the construction of the great temple in Mayapur.

When I was a new devotee, in my first couple of years in the movement, I approached Srila Prabhupada one day while he was getting his massage on the veranda of the Calcutta temple. “Srila Prabhupada,” I said, “I have been thinking about what pleases you most.” Srila Prabhupada was so pure, he took every word into his heart. He replied, “Yes.” I said, “The two things that seem to please you the most are distributing your books and building the big temple in Mayapur.” Srila Prabhupada smiled with great appreciation and said, “Thank you very much.”

So, those were Srila Prabhupada’s two main strategies for spreading Krishna consciousness, and Sridhar Swami helped him in both. In his early days, Sridhar Swami was instrumental in developing book distribution in North America. And in his later years, he was involved with the Mayapur project, planning and raising funds for the great temple. And by Maharaja’s mercy, on Gaura-purnima, standing in front of the Pancha-tattva Deities in Laguna Beach, I got the inspiration: “Now it’s time for Mayapur. Sridhar Swami understood that long ago. Now it’s time for you [me] to join the effort, too.” And that was important for me in other ways as well—to let go of the past: “Forgive and forget. Now let’s all work together for Mayapur, for Sridhar Swami, for Srila Prabhupada, to build the wonderful temple.”

When I asked Sridhar Swami how I could help, he requested me to speak about my experiences of Srila Prabhupada related to Mayapur. In 1973, when Srila Prabhupada came to Calcutta from England, he was very excited and enthusiastic about Mayapur. Tamal Krishna Goswami had gotten the first land, we had observed the first Gaura-purnima festival there, and now Srila Prabhupada had come with the plans for the first building. There was a detailed discussion, and at the end Srila Prabhupada said, “If you build this temple, then Srila Bhaktivinoda Thakura will personally come and take you all back to Godhead.”

Now I think, “That might be my only hope, so I’d better get to work. We’d better build the Mayapur project, because I don’t know how else I will ever get back to Godhead.”

His Holiness Sridhar Swami has given me a lifetime of work in service to Srila Prabhupada. Although jiva va mara va, to live or die is the same for a devotee—and certainly that was true of Maharaja—my own feelings are mixed. I think, “He left so much service for me, given me so many instructions. So I must stay and execute his mission.” I think the same about Tamal Krishna Goswami. Even though part of me misses them terribly and wants to be with them, mainly I think, “They left me so many instructions. I have so much service to do for them here.”

Of course, how long we have to do what they have asked—what they would want—all depends on Krishna. Therefore, whatever time we do have left we should use in the best possible way—in Krishna consciousness.

6 Responses to “Sridhar Swami and Mayapur”