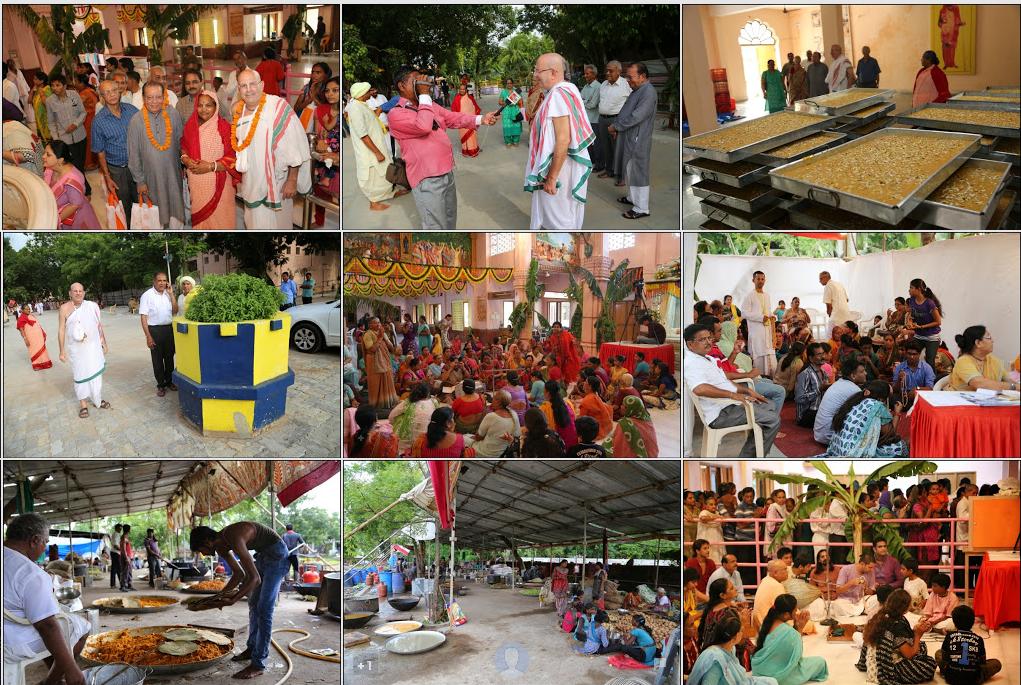 On Sunday, August 17, 2014, ISKCON Baroda organized a grand observance of the annual festival of Sri Krishna Janmastami. On this day Lord Krishna advented himself five thousand years ago at Mathura, in North India.

Estimates of the huge numbers of local residents who came to have “darshan” — to see – the Deities of Sri Sri Radhashyamsundar, Sri Sri Sri Jagannath, Baladev and Subhadradevi, and Sri Sri Gaur Nitai in the temple here range from one hundred thousand (one lakh) to two hundred thousand (two lakhs).

There was a continuous flow of visitors right from the morning until well after 1 AM on Monday, August 18, 2014.

Some of the features of the observance here:

a. the temple room was stunningly decorated with elaborate flower garlands, and banana trees with unripe bananas on them.

b. Krishna-lila (the pastimes of Lord Krishna) were represented by an attractively arranged series of “cut-out” figures of Lord Krishna, the Panchatattva (Sri Chaitanya Mahaprabhu and his four main associates), that was placed outside in the temple garden, and highlighted by decorations and lighting. One of the figures was Lord Krishna dancing on the head of the Kaliya-naag, on the bank of the Yamuna river – and a stream of water was created in front of the cut out, that was very attractive to the visitors.

c. A tent where continuous simple, short lectures and a slide show on the philosophy of Bhagavad-gita were presented by ISKCON congregational devotees. For much of the day there was a queue of persons waiting to be seated for the lecture and slide show, prompting the thinking that there should be two such tents next year!

f. Phalaahaari (non-grain) prasad was sold at Govinda’s sweet shop and snack bar. Fantastic rush of local residents there up till midnight.

g. Rush at the gift shops.

h. Japa booth, where the public was instructed by congregational devotees on chanting Hare Krishna mahamantra japa on beads. i. continuous distribution of free prasad in the form of bananas and “mathura peda” sweets (without grains), from morning till evening. Also “misri” (sugar candy) and pinjiri (a sweet powder made from coriander seeds and powdered sugar) prasad was distributed, in lesser quantity.

j. large contingent of local police were present to provide security in the evening, right until about 2 AM.

k. continuous Hare Krishna mahamantra kirtan in the temple room throughout the day up until midnight and afterwards as well!

l. Three extra-large high resolution video screens were placed both within the compound and outside on the road, and it was continuously displaying the activities in the temple room as well as scenes from the complete set of Srila Prabhupada’s video DVDs.

m. Large arrangement for shoe keeping on the main road in front of the temple, manned by volunteers for the occasion.

n. Fireworks were set off at midnight and continued for around half an hour in celebration of the appearance of Lord Krishna.

Outgoing Police Commissioner Satish Sharma, IPS, outgoing District Magistrate Dr. Vinod Rao, IAS (who completed a Ph.D. on the Bhagavad-gita), both of whom were transferred on Saturday August 16, due to upcoming parliamentary elections in our constituency (due to the resignation of Indian Prime Minister Narendra Modi from Baroda, and retaining his parliamentary seat at Benares. Under election guidelines, officials who have served in a particular area for more than three years are to be transferred, as per the rules) both visited for Janmastami darshan. Police Commissioner Sharma attended the arati, held after the midnight panchamrita abhishek (bathing Their Lordships with five nectars), that commenced after chappan bhog (offering of sixty four items to Their Lordships after the abhishek). Municipal Commissioner Manish Bharadwaj also visited for darshan during the daytime.

Afterwards, full bhojan (lunch) prasad (the mercy of the Lord) was served to around ten thousand life patrons and donors and their families.

In the evening, there was an “open bhandara” – mass distribution of prasad
(meals) to all who came to the temple. We estimate that more than twenty thousand visitors came for darshan and then took prasad. [Pictures of the bhandara/mass prasad distribution will be posted a bit later on my Facebook page].

ISKCON Baroda wishes to extend thanks and regards to Smt. Kantadevi and Sri Shivlal Goyal, Sri Sushil Agarwal, Sri Kamal Agarwal, and other generous donors by who’s support we were able to made the function a grand success! Sri Krishna Janmastami mahotsav ki jaya!