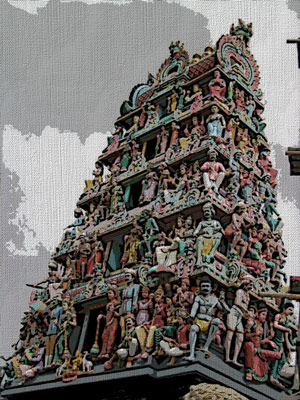 I’m living in India and don’t have experience in temples in the west, or far away from India, with large Indian communities. My “knowledge” comes from other devotees’ reports, which means I can’t be very sure of what I’m going to say – I’m ready to be corrected by others who know more, but I’m feeling pretty strong about this topic.

Jaya Madhava prabhu lives in Moscow, and if I remember correctly, the Indian community in Moscow, Russia, and all over the world was very active in raising support for the ISKCON temple there, which has been confiscated, practically, by the Moscow administration.

The last information I saw was that the Mayor of Moscow agreed, during a meeting with an Indian politician, to allot land for the temple. (according to some Indian news agency, repeated on several ISKCON-sites, but I haven’t seen it confirmed by other sources yet.)

Don’t you think, Jaya Madhava prabhu, the Indian community deserves a little respect, perhaps even “pampering”, for this effort?
I would like to know how, exactly, Indians are being “pampered”? Are they welcomed when coming to the temple, offered a nice, quiet place to sit, some prasadam, and do devotees spend time with them, listening to what they have to say and preach to them?

I’m afraid that this is not common practice in many temples, and those few who do it deserve to be congratulated, in my opinion. For properly treating not only Indians, but everybody else, hopefully, who has the good fortune to visit an ISKCON temple. As far as I know, vaisnava etiquette requires us to welcome any visitors to our place and make them comfortable, according to our means. why should Indians visiting ISKCON temples be excepted from this rule?

if this welcome is only extended to potential donors, Indian or from the local country, and only for the purpose to extract money, it’s no good, and the so welcomed guests will understand that quickly and loose their enthusiasm to donate, and therefore the preferential treatment.

If, on the other hand, the aim is to engage the guests in service to Krishna, either through their money, their personal efforts, or both, preach to them, ultimately help them to become devotees, I don’t see what’s wrong with that. Never mind where they came from, how long they have been living in that country, or where their forefathers were born.

So much for the “pampering” – now to the worship of demigods:

Books distributed are seeds, and without follow-up it’s like seeds sawn in a very unfavorable environment. Some will sprout and grow, eventually, but if the environment can be made more favorable, many more will survive.

Iin most of today’s societies the weeds opposing the bhakti latha’s growth are stronger than 30 years ago, and less fertile earth can be found. There are not many hippies searching for spiritual enlightenment anymore, and many of today’s city-dwellers are badly damaged already, bodily and mentally, before they reach
20. You can’t just give them a few books, invite them to the Sunday Feast, and hope that the lecture will convince them to become devotees. It’s too far away from where they presently are, and if they don’t get a better chance it will take several life-times for them to come closer to Krishna.

If you can create an environment where they feel comfortable, not threatened, and a little familiar at least, you have a chance to get through to them, slowly open them up to Srila Prabhupada’s teachings and instructions.

I am aware of several attempts in this direction. Loft Preaching is an attempt to build a bridge for western city-dwellers to come closer to Krishna consciousness, and recently devotees in Australia and New Zealand have been successfully using adaptations of hatha yoga to attract and cultivate them (see yogamandir.com and atma yoga at urbanmissionary.info for more information).

Srila Prabhupada didn’t say we should practice or teach hatha-yogA, but devotees were doing it while he was here, and are doing it now. Like jogging or taking medicine, it’s a way to influence body and mind, make them more favorable for devotional service. Neither is it the most important thing in life, nor is everyone required to do it, but there’s nothing wrong with it if done in the proper perspective, with Krishna consciousness at the center.

The same applies to the worship of devatas, who are, after all, advanced devotees of the Lord. If you can attract a large Indian community to the temple by observing the anniversary of Lord Siva or Durga-Devi, and use the opportunity to explain their position as devotees and servants of Lord Vishnu, Krishna, then that’s very good. If they are able and willing to donate badly needed Laxmi for our preaching mission, all the better.

To find a balance of how much effort and resources should be allocated for book distribution, loft preaching, or Indian-oriented functions is a strategic or managerial decision and up to the temple management and their supervising authorities. But to me Atma-yoga or Durga-puja makes a lot more sense than selling T-shirts on city roads, or paintings & candles to ignorant customers.

In the Middle East hundreds of devotees have been made by using the Bhakti-vrksa program, almost exclusively among Indian expatriates, and many new devotees have joined in Australia and New Zealand through Loft Preaching and Atma Yoga. these devotees are following Srila Prabhupada’s instructions, distributing his books, and spreading his mission. Isn’t that what it’s all about?

2 Responses to “Hinduization of Iskcon: another view”