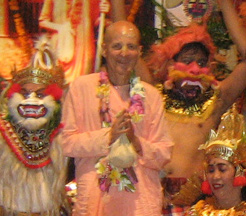 We have a very interesting story of how Rupa Manjari devi dasi became a practicing vaisnava. She graduated from the university majoring in political science. She had a serious drug problem while studying, but due to some accident she gave that up, that is when she started to believe in God.

Since she was more or less a hippy when we met, I asked her why she chose that field. She was thinking that she could be of some kind of service to humanity, but quickly became discouraged. She started living in the mountains trying to be natural. She would go to the cities and sing and dance in the streets to get some donations and maintain herself. After a while she felt that she was being selfish and started praying to God to help her to find some meaning in life. That day she met a harinam festival party and joined. She is very serious about spiritual life and is now using her singing and dancing skills in the service of Lord Caitanya Mahaprabhu’s sankirtana movement and is married to the leader of the harinam festival party.
The amazing thing about this story is that it goes back to before she was born. In the early 70’s her parents were studying in London and often witnessed the harinama sankirtan parties. When she was a small child her father would take a cooking pot and spoon and chant Hare Krsna to entertain his daughter. So of course when she met the devotees she joined. Her mother recently told her father, “look what you have done, you were singing Hare Krsna to her and now your daughter is a Hare Krsna.”
Now her mother is becoming favorable and when they visited Rupa Manjari’s home, she went to the altar and started ringing the bell.

Upon seeing the chanting and dancing of Lord Sri Caitanya Mahaprabhu, Lord Nityananda predicted that later there would be dancing and chanting in every village.

This prediction of Sri Nityananda Prabhu’s is applicable not only in India but also all over the world. That is now happening by His grace. The members of the International Society for Krishna Consciousness are now travelling from one village to another in the Western countries and are even carrying the Deity with them. These devotees distribute various literatures all over the world. We hope that these devotees who are preaching the message of Sri Caitanya Mahaprabhu will very seriously follow strictly in His footsteps. If they follow the rules and regulations and chant sixteen rounds daily, their endeavor to preach the cult of Sri Caitanya Mahaprabhu will certainly be successful.

Whoever heard Lord Caitanya Mahaprabhu chant “Hari! Hari!” also chanted the holy name of Lord Hari and Krsna. In this way they all followed the Lord, very eager to see Him

In order to become an empowered preacher, one must be favored by Lord Sri Caitanya Mahaprabhu or His devotee, the spiritual master. One must also request everyone to chant the maha-mantra. In this way, such a person can convert others to Vaisnavism, showing them how to become pure devotees of the Supreme Personality of Godhead.

9/11 slows down book distribution in LA
Terror attack: Lest we forget the tears-V

Seeing the Prime Cause