Most people eagerly await their retirement so they can relax and enjoy at home. But there are exceptions.

Divya Simha Dasa (Devidas Vaidya), 70, from Mumbai is a person who does not believe in retirement — in fact he feels real work begins now. After working with Pfizer India for over 33 years and entering into its Hall of Fame for community and social service, Divya Simha wanted to do something more. Village development, women’s empowerment, health and education were some activities in his agenda.

But before starting to work on these goals, he wanted to lay the right foundation. He explains, “I was convinced that material problems couldn’t be solved using material solutions; these problems need spiritual solutions. Whether it is poverty, malnutrition, exploitation of women, health, illiteracy, or any other social issue, all problems are rooted in one thing: spiritual ignorance, or ignorance of our spiritual identity. Once you address this issue, every problem can be efficiently handled and everything will fall in proper place.”

Divya Simha felt that the best way to undertake spiritual education is by spreading the knowledge of Bhagavad-gita, the jewel of India’s spiritual wisdom. Srila Prabhupada’s commentary on the Gita verses left no room for doubt about one’s goal and purpose in life.

He decided to approach schools in the Uttara Kannada district in the southern Indian state of Karnataka. Upon approaching the school authorities in various villages, he found that the schools lacked even the basic facilities like tables and chairs and uniform for the children. After supplying these items, he requested the teachers to take copies of Bhagavad-gita so they could begin teaching spiritual principles to the children. He also informed them about the importance of meditation and taught them to chant the Hare Krishna maha-mantra.

The teachers dutifully followed this instruction. Every day during morning prayers, schoolchildren would gather around Tulasi Devi and would chant the Hare Krishna mantra for a few minutes. This simple activity seemed to have miraculous effects in inconceivable ways. The overall liquor consumption in the village dropped by 75%. Ten families have started observing Ekadasi fast, and fifteen families have taken up the regular chanting of Hare Krishna mantra on beads.

Inspired by this example, fourteen other schools in nearby villages also introduced the chanting of Hare Krishna mantra during their morning prayers. Copies of Bhagavad-gita soon entered their school libraries.

Divya Simha felt extremely inspired by this success, and he committed himself to cover the entire district of Uttara Kannada. He thought it would be easy to cover all schools if he approached the Block Education Officer (BEO) of each taluka. He would fix appointments with them, and on the appointed day he would travel all the way from Mumbai to meet them. But they were scattered in far off towns, and bureaucratic delays made meeting with them very difficult. During such long waits, he often had to skip meals because he could not get proper vaishnava diet. Or he would survive on simple curd rice and milk for days together.

His persistent efforts finally convinced one BEO, who agreed to keep copies of Bhagavad-gita in 100 government school libraries. Soon other BEOs followed, and in the next four years, 1609 school libraries of Uttara Kannada received copies of this transcendental literature.

Besides school libraries, Divya Simha successfully placed copies of Bhagavad-gita and other Srila Prabhupada’s books in 220 Gram Panchayat libraries and in the library of Indian naval base at Karwar, Maharashtra.

Srila Prabhupada used to say that if a person read one verse or even half a verse of the Bhagavad-gita, he would derive great benefit, and the doors of liberation will flung wide open for him. Divya Simha continues to strive tirelessly to fulfill Lord Caitanya’s vision of taking Krishna consciousness to every town and village.

For the last several years, Divya Simha is involved in a project called Hare Krishna Vana Mahotsava, where he distributes fruit trees to poor villagers. “If every villager has a mango, jackfruit, lemon and other fruit-bearing trees, they can easily earn Rs. 100,000 every year,” he explains.

As part of rural development, he is trying to ensure that every family in a village has a cow, which can provide excellent manure in the form of cow dung and cow urine. He also wants to ensure that every home has a toilet, so village women do not have to face any inconvenience.

In his native village of Madiangadi, he is teaching the villagers the traditional art of organic farming. Vishnu Naik from his village, expressing his gratitude to Divya Simha, recalls, “Six years ago, I had three cows. After taking up organic farming, my farm production has increased by 50 per cent. Today I own 24 cows, and I make more money by selling compost.” Naik’s success has inspired many villagers to emulate him, and many have started migrating from the cities back to their villages.

His message to everyone: “There are about 630,000 villages in India. I request every senior citizen of India to reach out and adopt at least one village and make use of their field of expertise in village development.” 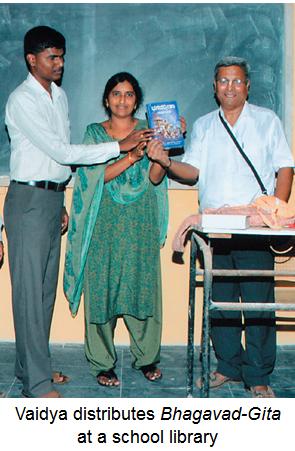 Mukundamala Dasa is the sub-editor for Back to Godhead’s Indian edition.
Siksamrta for Sale
Vraj Mandala Padayatra 2014

Krsna is the Unifying Agent

When Faith is not Blind