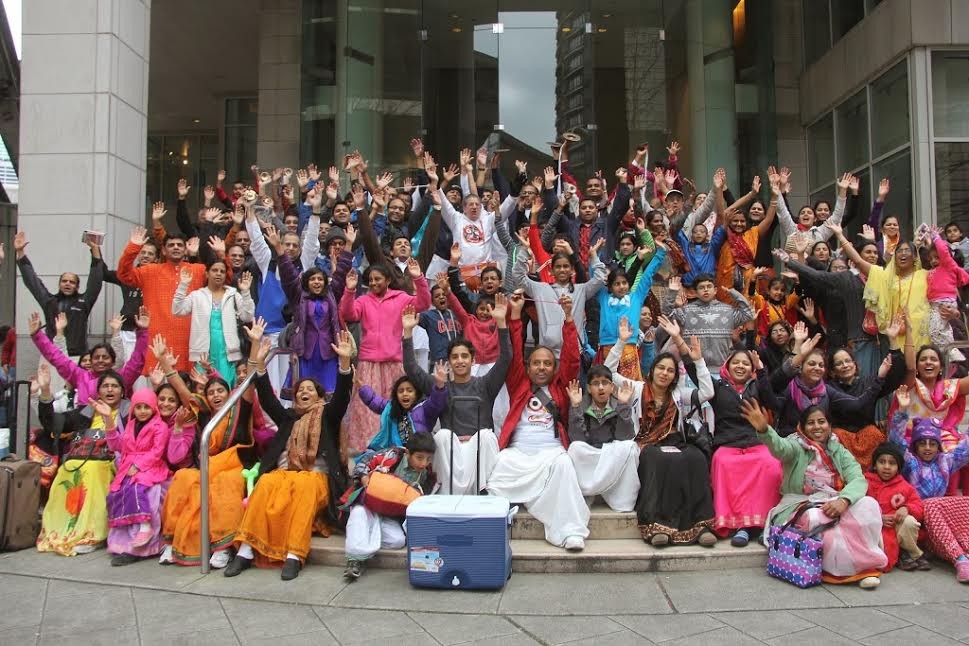 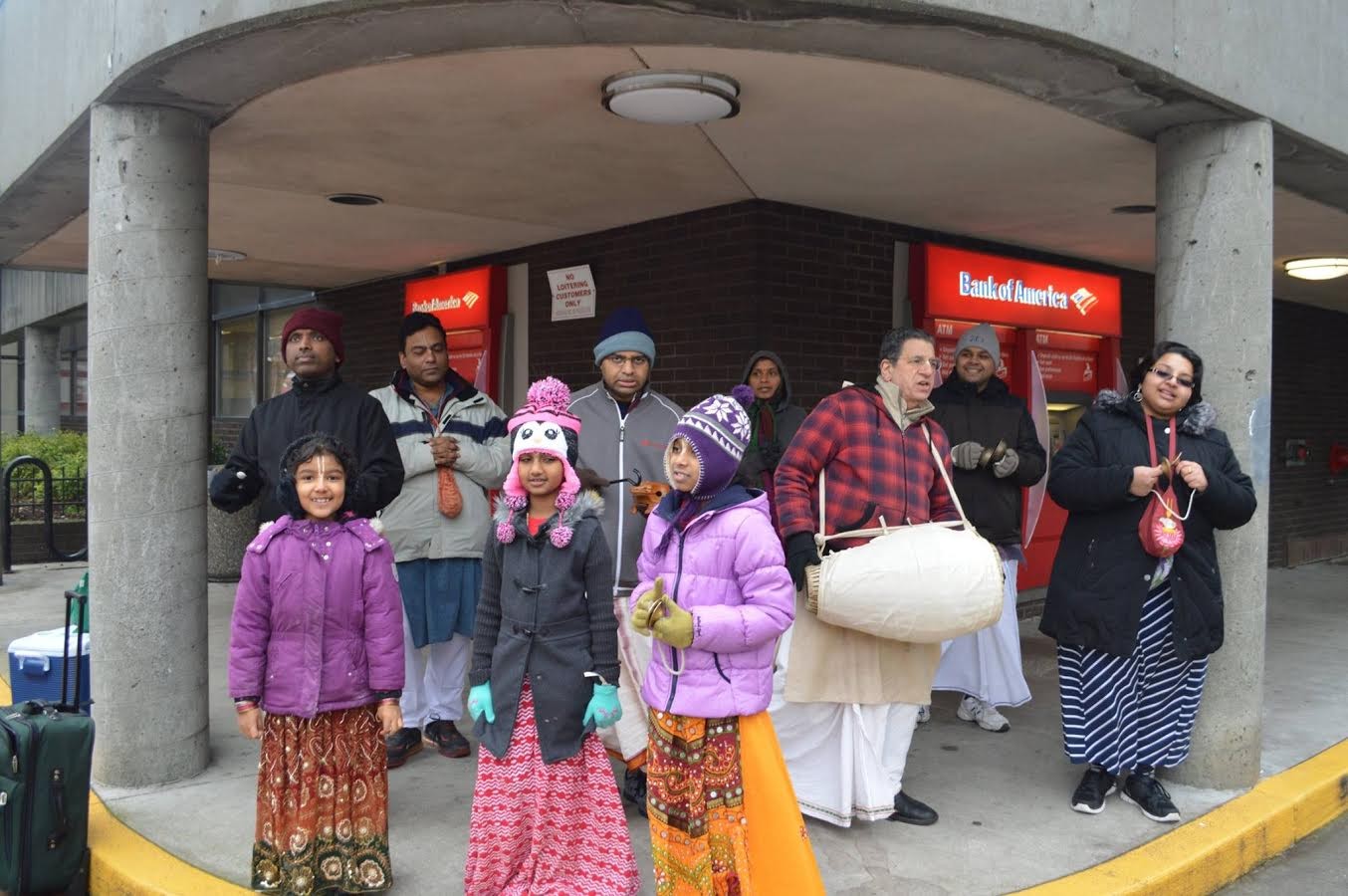 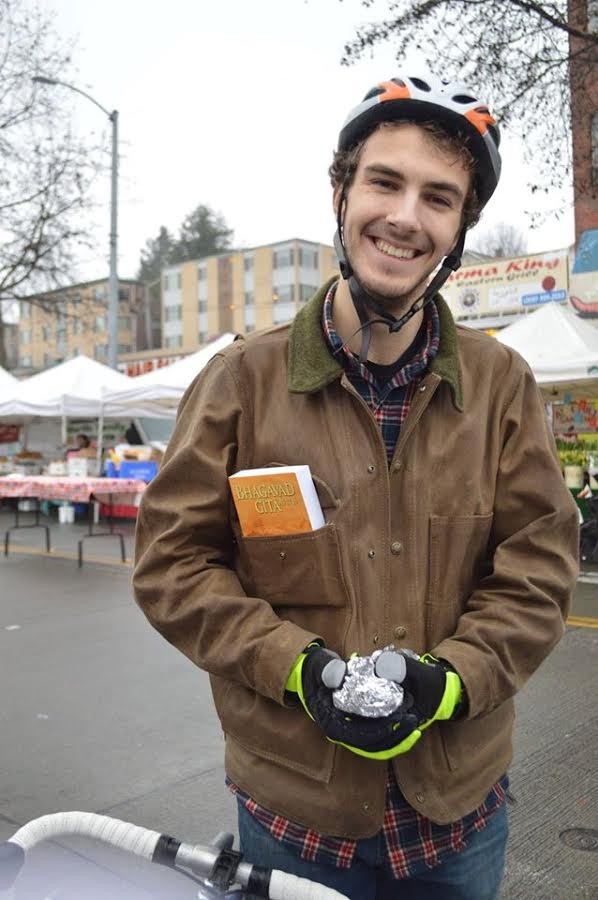 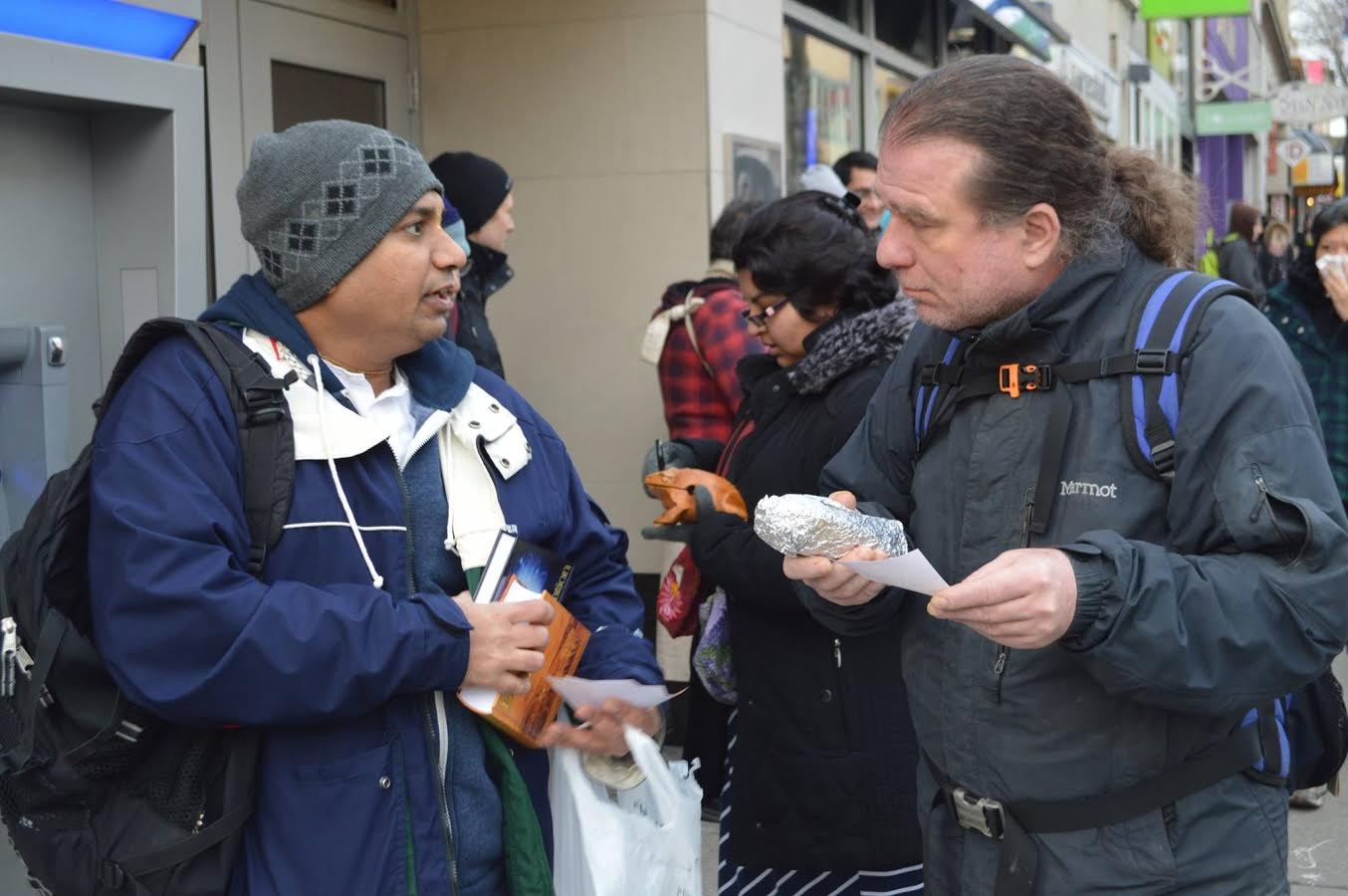 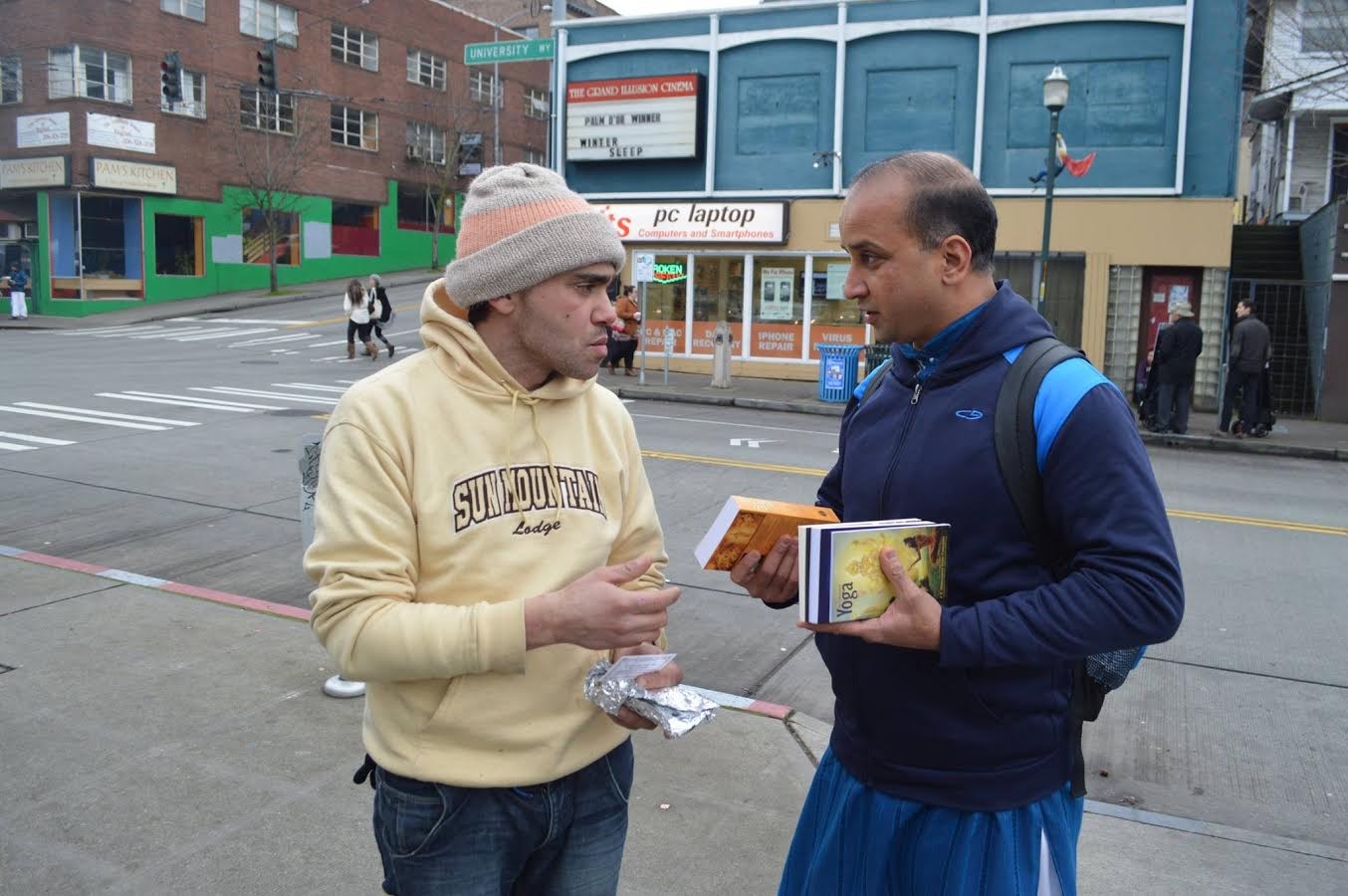 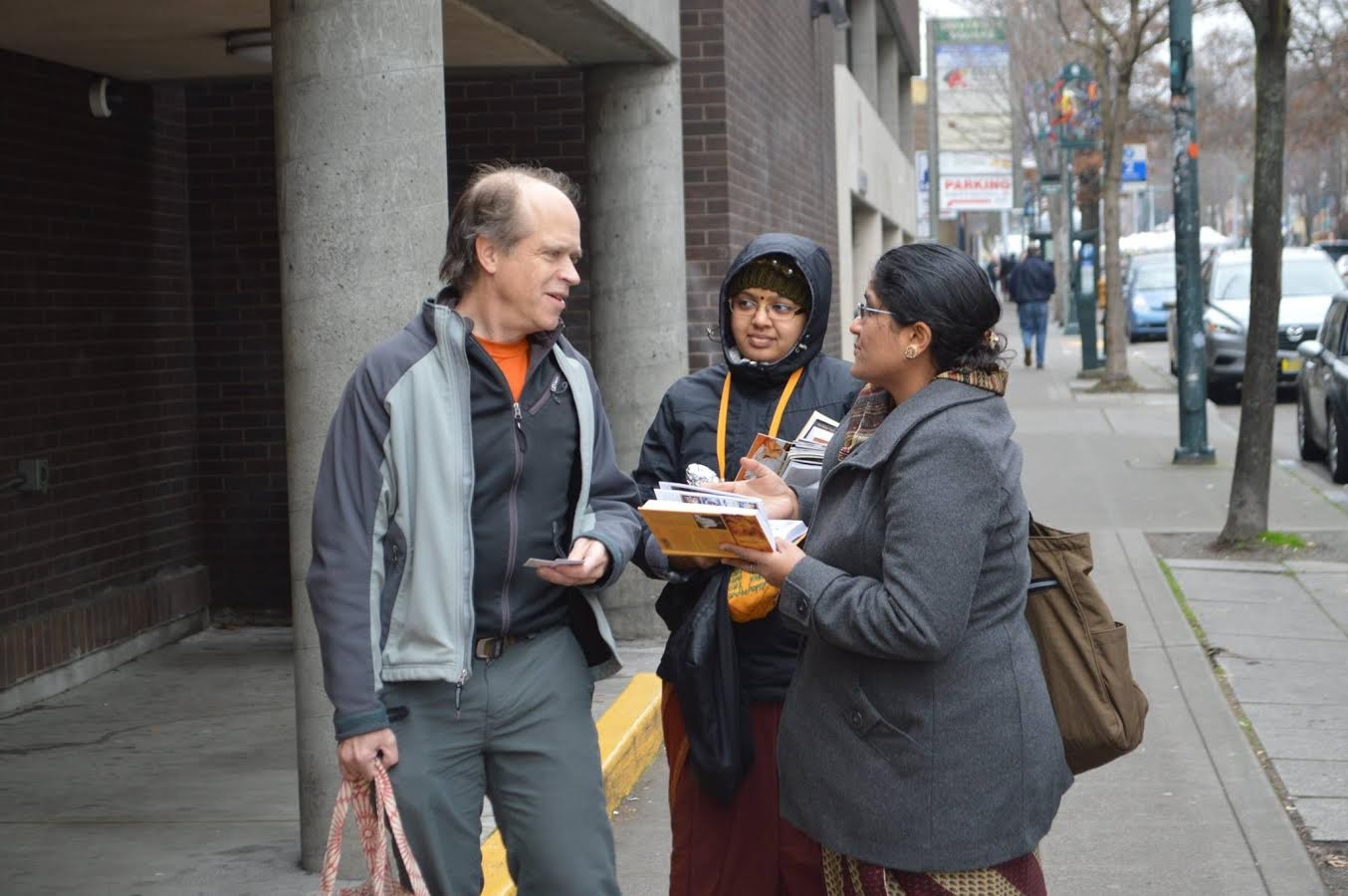 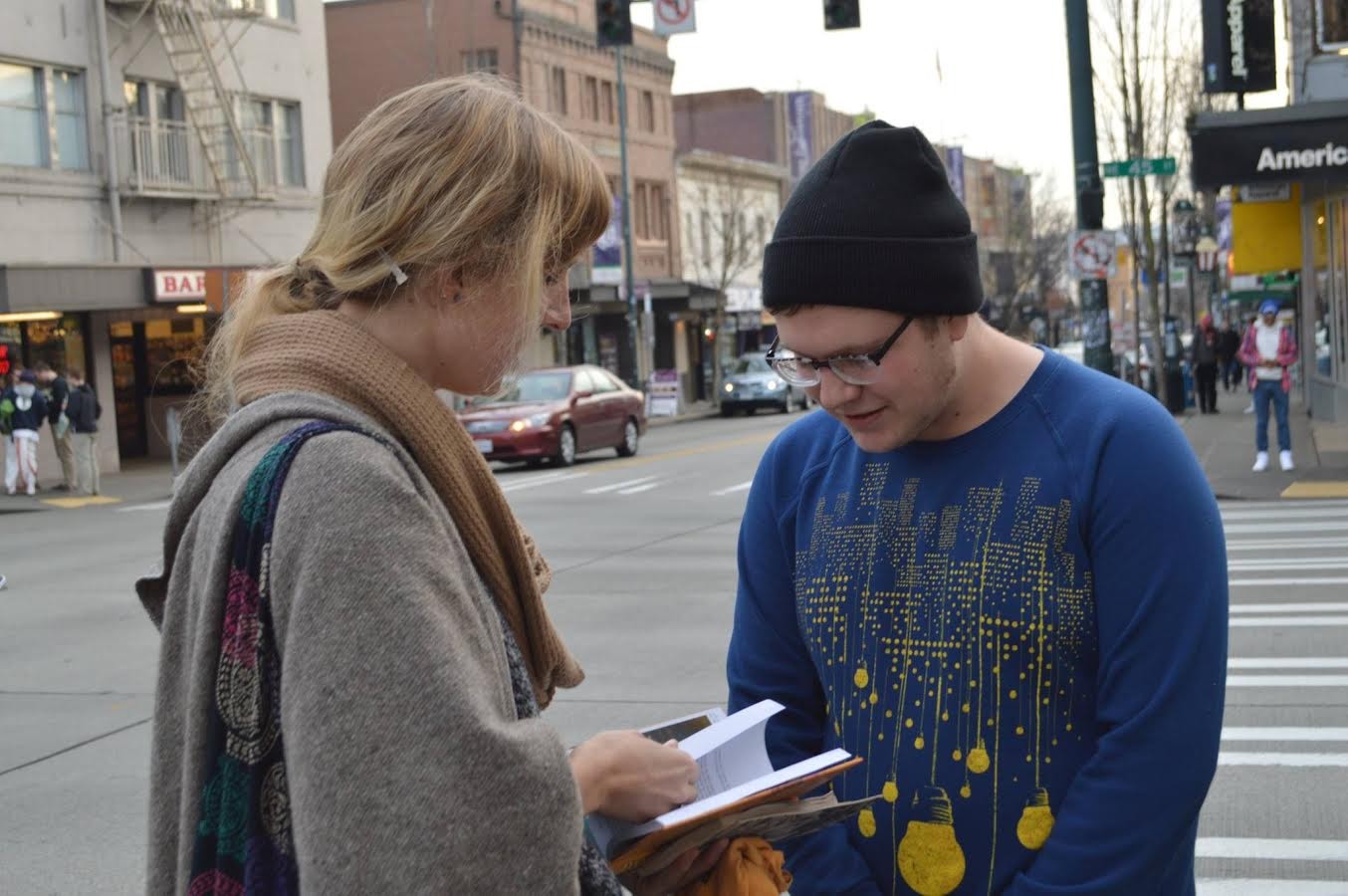 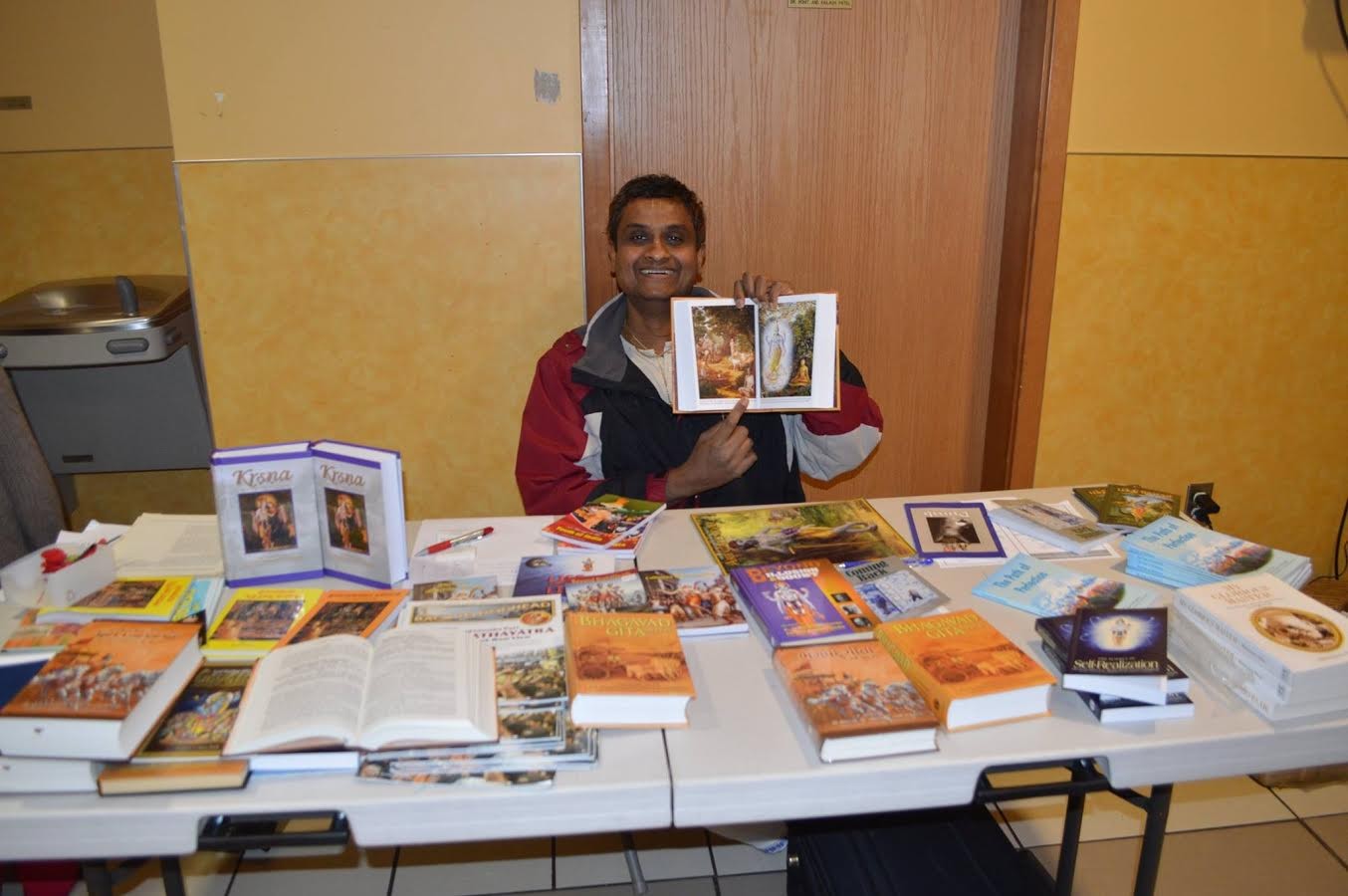 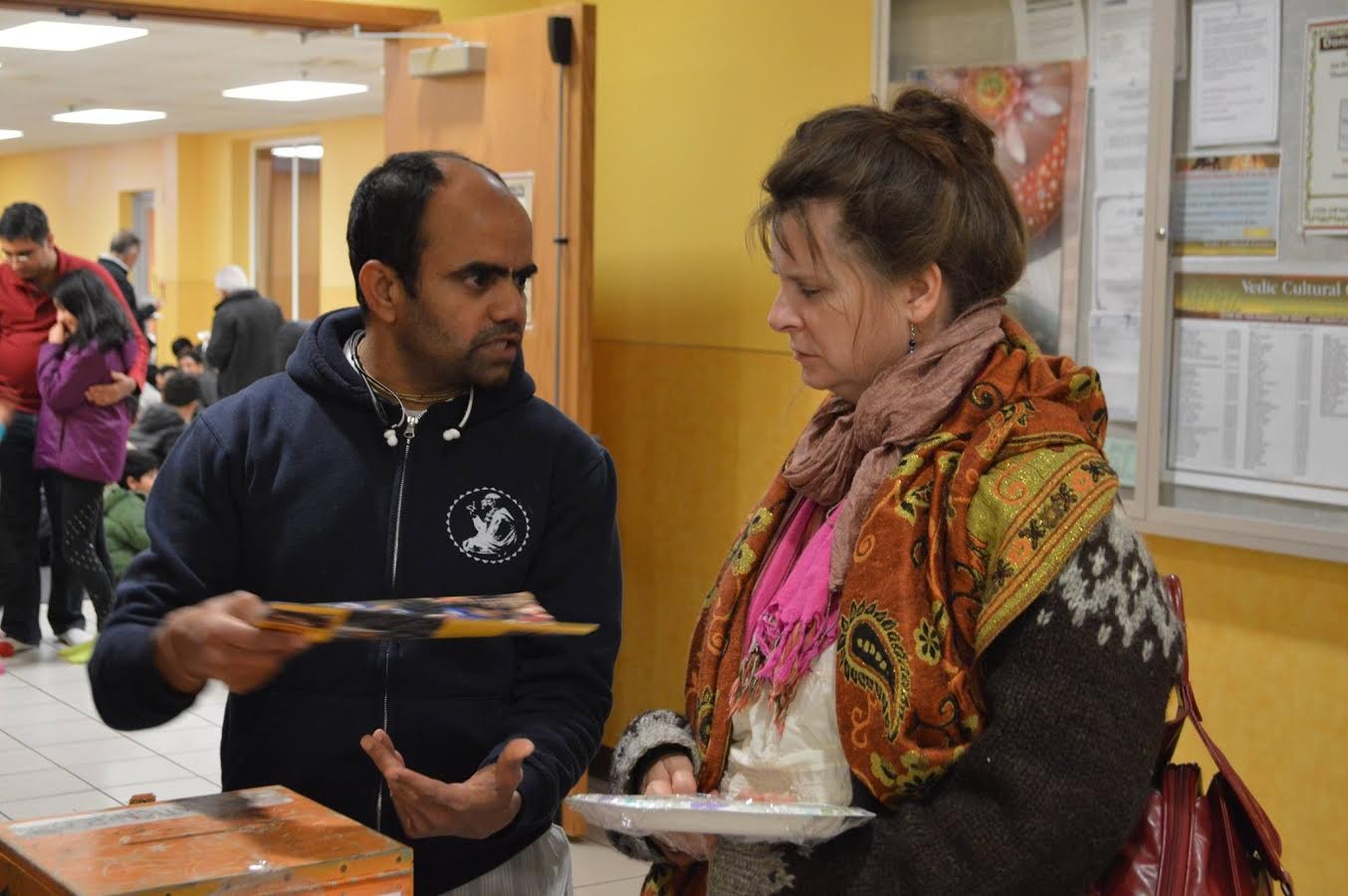 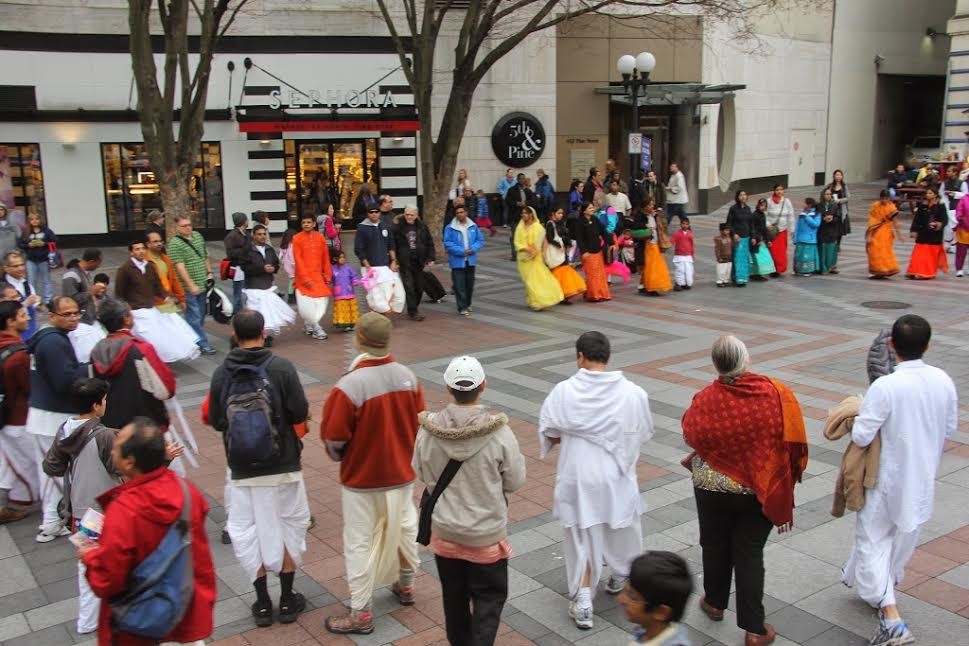 Sankirtan at ISKCON Seattle has evolved into a multi pronged strategy to attract diverse people to Srila Prabhupada’s movement.

Every Saturday, ISKCON Seattle devotees under the leadership of HG Harivilas Prabhu (ACBSP) perform Sankirtana in the University District, Seattle. A dedicated team of devotees engages in the chanting of the Holy Names of the Lord while another dedicated team works on sharing Srila Prabhupada’s books with people and another team distributes free burritos and invitations for the My Sweet Lord Café – ISKCON Seattle’s free vegetarian and vegan restaurant. Bhakta Manoj and Bhaktin Bharti lead a team that makes a few hundred burritos every Saturday morning. A group of around 20 devotees then distribute them during Nagara Sankirtana for free along with invitations for the café program at five pm.

In a recent lecture, HG Hari Vilas Prabhu said, “Burritos are perhaps the strongest most intoxicating thing that we are distributing. People become ecstatic, overwhelmed and attracted to Krishna. They are made so well that it is hard to give them out because our devotees might eat them even before we distribute them. So we need to lock our burrito box until we get to the site.” People in the University district eagerly wait for Saturday to get the Burritos. Michael one of the Burrito distributors was asked, “Why are you giving this?” He replied, “We are sharing Krishna’s love. “

One lady was so curious to know why we were distributing free burritos. Madhava Chandra Das explained, “We are happy so we are distributing this special Indian burrito to make you happy “. She generously donated five dollars for the burrito and also bought two books. She was really happy and blissful after interacting with the devotees and receiving Krsna Prasad in the form of a burrito.”

Radhika Gopinath das once while distributing books, talked to Ishan, a native of Saudi Arabia and a student of University of Washington. After the usual chanting of Maha Mantra on the Mantra card, Ishan asked if the book was religious. Radhika Gopinath Das mentioned that it was a cultural representation of Vedic society. Ishan took the book and searched his pockets for a five dollar bill and gave it to him. Radhika Gopinath das gave him a burrito which he refused. After 15 minutes, Ishan came back and claimed his Burrito. When asked “Why did you get this book?” Ishan said “One has to discover his own journey”….very profound words from a twenty two year old.

Veggie Wrap on Saturday Evenings at the Café

Urban preaching is at its best at ISKCON Seattle’s “ My Sweet Lord Café” in Seattle’s University district. Devotees invite interested audience they meet at the Saturday Sankirtana to a Tea ,Veggie wrap and Mantra session at the cafe. This café which was started by ISKCON Seattle as Seattle’s first and only free Veggie and Vegan café has become a place where students and many others come in to discuss philosophy and also get their first taste of Prasad and their first contact with devotees .

Many visitors who were invited at the effective Nagara Sankirtan during the day start showing up at the café at five p.m. Under the leadership of Kama Gayatri dasi, the devotees interact with the visitors and make friends. On a typical Saturday evening at the café , you can see Harivilas Prabhu along with his team making veggie wraps with great care using herbal chutneys, olive oil, choicest fresh vegetables, lightly pan fried tofu, and garnishes on the top. Upgrades at the café are in the pipeline to make it comfortable for our guests to lounge around.

The day when the entire city of Seattle will drown in mercy of Lord Caitanya is not far away as Harivilas Prabhu expands the current My Sweet Lord prasadam distribution center in University district to nearby towns of Renton, Bothell, etc. Param Vijayate Sri Krishna Sankirtanam!!

ISKCON Seattle also organizes five major festivals in its five cities, starting March with the Festival of Colors and ending in November with Festival of Lights. Those festivals in partnership with different cities help them connect with around thirty thousand people. This is in addition to the various cultural festivals that are organized at the temple located in Sammamish. Dance, Arts, Drama, Concerts and other such cultural presentations of Krsna Consciousness at the temple has helped ISKCON Seattle become a via media to connect thousands of new people to Srila Prabhupada’s books and philosophy.

One such effort was the Maha Mantra Yajna on the first day of 2015. ISKCON Seattle devotees and visitors chanted 5 million names of Krishna on this day. This tradition was started 7 years ago and has been drawing the attraction of many greater Seattle residents.

Also this year a new Krishna Lounge and library was inaugurated at the temple to provide our visitors a comfortable place to chant and easily access Srila Prabhupada’s books, books for children, books by elevated Vaishnavas from ISKCON . There is also a media center setup for those devotees and children who wish to view various Srila Prabhupada movies and other Krishna Conscious videos.

Their four pronged strategy of Burrito Sankirtana, Saturday Evening programs at the café, Indoor and Outdoor Cultural Festivals and Systematic Vedic Education along with a focused book distribution team has increased their book distribution figures in 2014 to their highest numbers so far. In 2014, ISKCON Seattle did 50 subscriptions of the Back To Godhead magazine, 2000 magazines and kids books, 1452 small books,424 medium books, 663 big books, 4123 maha books which includes 12 Srimad Bhagavatam Sets and two Caitanya Caritamrita Sets .

The Book Distribution team is also grateful to HG Vaisesika Das for the training they received from him in book distribution earlier in 2014 and also to HG Mahat Tattva Das from San Deigo in urban secural preaching.

If you wish to contact the ISKCON Seattle Communications Office please write to info@iskconseattle.com