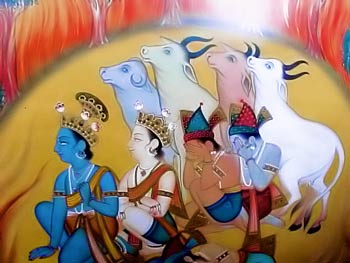 “Partial Arts”: Krishna and the Killing of Demons

“Where does David get that from?” The question came as something of a surprise. My brother’s son, David, has a temper, an occasional tendency to throw tantrums, and a neighbor was wondering what caused it. He’s now twelve years old, and Carol, the neighbor, thought that he should have outgrown these by now. I chimed in: “You know, God Himself has a violent and destructive side, too.”

“Well, you’ve got religious war, though most of those are fought for economic and political reasons rather than spiritual ones. And you’ve got a consistent mortality rate — no one dies without the sanction of God. So His hand can be seen in the form of time, which destroys all.”

“Yes, but if you look at it philosophically, we wouldn’t have that aggressive, violent quality if it wasn’t first there in God. After all, we’re made in His image, and so everything we see in this world must have some prototype in the spiritual realm.”

“I’ll tell you something else, too. In the ancient Vaisnava scriptures of India, you’ll find that God Himself enjoys both chivalrous pastimes of love and the thrill of adversarial contact. In both of these He enjoys battle and engages in acts of destruction. That’s why it’s there in us.”

“Really?” I had her interest.

“Yes, Krishna, as God is called in early Vaisnava texts, engages in pastimes of chivalry, as, for example, when he saves one of His female devotees, Draupadi, from being disrobed by an assembly of evil men. Or the demons — He kills many demons. When He came to earth, some 5,000 years ago, the world was overrun by a demoniac element.”

“Well, to save us from certain devastation, He did away with these miscreants, and in so doing showed us His greatness. Krishna has been glorified ever since, in song, dance, drama, art.

“And there is much we can learn from His killing of demons. In addition to saving us from the hands of those who would do us harm, Krishna’s destruction of demons, when studied closely, prepares us for weeding out unwanted bad habits, the kind that obstruct our spiritual vision.”

“Yes. Bhaktivinoda Thakura, a great nineteenth-century Vaisnava master, wrote in his Sri Caitanya Siksamrta, “The devotee who worships the holy name should first petition the Lord for the strength to cast out all these unfavorable tendencies and should pray thus before Lord Hari [Krishna] on a daily basis. By doing this regularly, the devotee’s heart will eventually become purified. Sri Krishna has killed a number of demons, which may arise in the kingdom of the heart. In order to destroy these problems, a devotee must cry very humbly before the Lord and admit defeat. Then the Lord will nullify all contaminations.”

Bhaktivinoda Thakura then gives the following analysis of Krishna’s pastimes in relation to impediments on the spiritual path — here, too, we are briefly introduced to several of the demoniac characters who battled with Krishna some 5,000 years ago:

Putana (the witch) represents the pseudo guru, who must be avoided at all costs. Sakatasura (the cart demon) represents carrying the burden of a cartload of ongoing bad habits, as well as lethargy and vanity. Trinavarta (the whirlwind demon) represents false pride, which comes from material scholarship and leads to the adoption to bogus philosophies. Deliverance of Nalakuvara and Manigriva (breaking the twin arjuna trees) represents arrogance and pridefulness, which comes from puffed-up prestige and is rooted in a madness for wealth. Vatsasura (the calf demon) represents a childish mentality that gives rise to a type of greediness resulting in wicked mischievousness.

The conch shell demon and getting the jewel that was stolen by him represent acquiring name and fame and desire for sensuous enjoyment under the plea of devotion. Aristasura (the bull demon) represents pride arising from indulging in false religions that were created by cheaters. This causes neglect of genuine spirituality. Kesi (the horse demon) represents the false pride of feeling that “I am a great devotee and spiritual master.”
Vyomasura (the demon in the sky) represents associating with thieves and other rascals and with people who put themselves forward as incarnations of God.

“In dealing with these more subtle demons,” I told my brother’s now exceedingly curious neighbor, “the devotee must fight diligently, acknowledging dependence on Krishna, the original defeater of demons. The pastime of the Kaliya serpent,” I told her, “is particularly telling.

“When Krishna fought with Kaliya some 50 centuries ago, He didn’t actually kill him. Because of the pleading of Kaliya’s wives — and because of Krishna’s unending mercy — He just banished the demon, who vowed never to cause trouble again. We too will never totally kill our demoniac mentality, but we can certainly transform it into a devotional one.

“Krishna defeated the original Kaliya by dancing on his many hoods, kicking each of his heads like an experienced martial artist. Actually, Krishna is more a ‘partial’ artist, because he is particularly partial to His devotees.”

My brother’s neighbor, Sylvia, laughed, enjoying my play on words. I decided to play further:

“And speaking of Krishna as a ‘partial artist,’ the demons — at least those who directly interact with God — are only ‘partially’ demoniac. That is to say, Krishna has a fighting spirit, a desire for confrontation and competitive rivalry, as we said. We began this discussion, you may remember, by discussing David’s violent tendencies, and how they originate in God. Right? Well, because God has such tendencies, certain devotees adopt an adversarial role, just so God can enjoy this variety of interpersonal dealings.

“Further, most of the demons in Krishna’s pastimes, like Kaliya, are only ‘partially’ defeated. Let me explain: Though most of them appear to be ‘killed’ by Krishna, they actually attain a certain kind of liberation, for their adversarial role was really just play (lila) and Krishna rewards them for fulfilling His desire in this way.”

“Wow,” she said. “God in the Vaisnava tradition is certainly a complex and multi-faceted individual.” She then added, continuing in the humorous mood, “I guess David is only “partially” aggressive, too. He’s actually a great kid.” We laughed and looked at each other knowingly, recognizing that there are truths that go beyond a child’s passing tantrums, and that even these tantrums have a basis in a reality that is simply more important.

Out of the Woman Comes the Man, Spends the Rest of His Life Getting Back When he Can