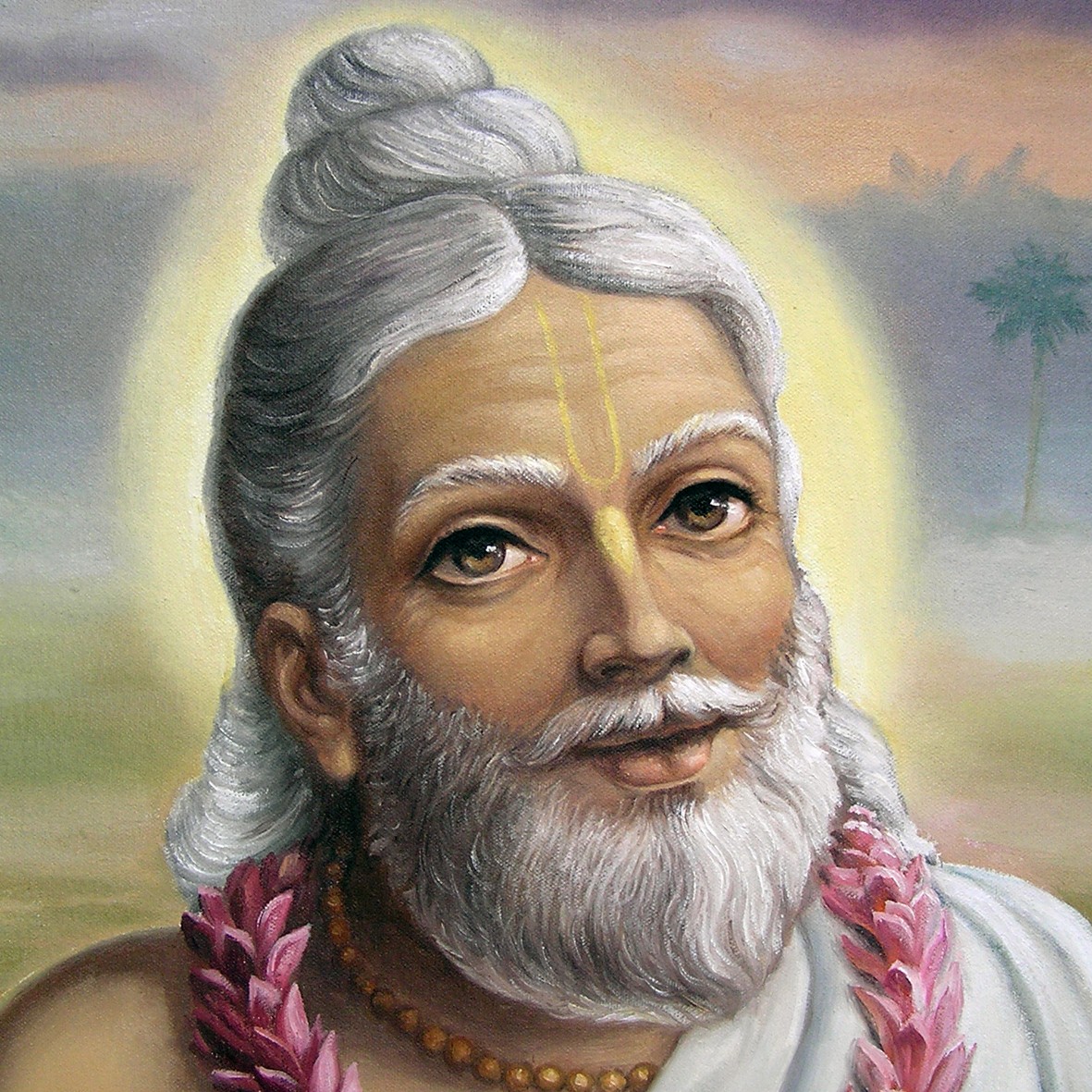 We are gathered here to celebrate the appearance day of Sri Advaita Acharya. Advaita Acharya is an incarnation of Maha-vishnu. In terms of pastimes, He appeared before Sri Chaitanya Mahaprabhu and so was considered an elder by Mahaprabhu. He was actually older than Lord Chaitanya’s own father.

Advaita Acharya, although Vishnu Himself, was in the mood of a Vaishnava. As a Vaishnava, He felt compassion for the fallen conditioned souls who were suffering without Krishna consciousness. Although previously Navadvipa had been a great center of devotion, it had deteriorated into a center of dry learning. Thus, Advaita Acharya felt compassion for the fallen souls of the age, so engrossed in material affairs, devoid of devotional service to Krishna. In the mood of a humble Vaishnava, although He was Vishnu Himself, He felt that He was not capable of delivering the fallen souls. He believed that only Sri Chaitanya Mahaprabhu Himself could preach the yuga-dharma of hari-nama-sankirtana and deliver them.

Advaita Acharya Prabhu was an ideal householder. He had read in the scriptures that the Lord sells Himself to a devotee who offers Him a tulasi leaf and a palmful of water. As a grihastha brahman, He worshipped a salagrama-sila at home. Therefore, He specifically began to worship Salagrama with Ganges water and tulasi leaves with the aim of bringing about Sri Chaitanya Mahaprabhu’s descent.

The Caitanya-caritamrta describes Sri Advaita Acharya’s appeal to Lord Krishna to appear again on earth. He cried with such intensity that the sound traveled throughout the entire universe and ultimately reached Sri Chaitanya Mahaprabhu. Because of the loud cries of Sri Advaita Acharya, Mahaprabhu did indeed descend, appearing in Navadvipa on the full moon night of Phalguna (February-March). Thus the Lord came at the request of Advaita Acharya, His pure devotee, to reclaim the fallen souls.

What was the method by which He reclaimed them? The method was hari-nama-sankirtana, the chanting of the holy names of the Lord. And so, in response to Advaita Acharya’s cries, the Lord appeared in Navadvipa on the full moon night of the Phalguna month, during a lunar eclipse, while millions of Hindus were bathing in the Ganges loudly chanting the holy names. Later, Sri Chaitanya Mahaprabhu Himself practiced sankirtana in Navadvipa-dhama, and after adopting the renounced order of life (sannyasa) left Navadvipa and traveled throughout India. Wherever He went, He chanted the holy names and induced others to chant the holy names as well.

Originally, after Lord Chaitanya took sannyasa, He wanted to make His residence in Vrindavan. His mother, however, could not bear the thought that He would be so far away. So in deference to His mother’s will, He made His headquarters in Jagannatha Puri, which is not so far from Navadvipa. Every year, devotees would travel from Navadvipa to Puri to attend the Ratha-yatra festival and have the association of Sri Chaitanya Mahaprabhu. Thus, they would go back and forth between Navadvipa and Puri and bring news to Mother Sachi about Lord Chaitanya.

Still, Lord Chaitanya had an ardent desire to visit Vrindavan, and so He left by foot from Puri to travel to Vrindavan-dhama. On the way, He stopped in a place called Ramakeli, the capital of the Muslim despot Nawab Hussein Shah. There the prime minister and the finance minister of the Nawab, who later became known as Srila Sanatana Gosvami and Srila Rupa Gosvami, came to meet Sri Chaitanya Mahaprabhu in disguise.

At the time, thousands of devotees were following Lord Chaitanya, and Lord Chaitanya inaugurated the hari-nama-sankirtana in Ramakeli just outside the area of the Nawab’s palace. The devotees chanted and danced day and night for many days. They totally forgot about eating, sleeping, and other bodily demands. They were simply absorbed in the ecstasy of hari-nama-sankirtana.

But after some time, a few of the devotees began to think of the Nawab, realizing that they were just outside the doorsteps of his palace. The Nawab, Hussein Shah, was a terrible tyrant. He killed people like anything. And he used intimidation to compel Rupa and Sanatana to serve him, threatening that if they didn’t accept his proposal to act as his ministers or secretaries, he would wreak havoc on the Hindu community and kill thousands. Some of the devotees began to become anxious that they were doing such loud hari-nama–sankirtana so close to the Nawab’s palace: “What if he takes notice of us and becomes enraged? He could kill us all!”

Sri Chaitanya Mahaprabhu, as the omniscient Lord, could understand the anxiety of these devotees. So He stopped the kirtan and told the devotees, “Although I am acting as a devotee, actually I am the Supreme Personality of Godhead, and because I am the Supreme Lord, no one can harm Me or My movement.” He explained that His movement of hari-nama–sankirtana was destined to spread to every town and village of every country of the world: prthivite ache yata nagaradi-grama, sarvatra pracara haibe mora nama. (Cb Antya 4.126)

During the time of Sri Chaitanya Mahaprabhu, His mission spread throughout India. But with the passage of time, even in India, it became weak. Unauthorized groups who claimed to be His followers but who did not actually understand or follow His principles arose and became prominent. The situation got worse and worse until, in the 1800s, Srila Bhaktivinoda Thakura appeared. He separated Sri Chaitanya Mahaprabhu’s true followers from the pseudo-followers and identified at least thirteen deviant groups (apasampradayas). He re-established the true idea of Chaitanya Mahaprabhu. He also discovered the birthplace of Chaitanya Mahaprabhu in Mayapur-dhama, and with his followers he located many different sites associated with the Lord’s pastimes, including the residence of Sri Advaita Acharya in Mayapur. Advaita Acharya actually had two residences—one in Mayapur-dhama itself and one about twenty miles away in Shantipur.

Although Lord Chaitanya had predicted that the holy name would be chanted and preached in every town and village of the world, even learned devotees could not imagine how such a phenomenon could come to pass. Still, Srila Bhaktivinoda Thakura predicted that very soon somebody would come to fulfill the prediction of Lord Chaitanya. And, as we know, His Divine Grace A. C. Bhaktivedanta Swami Prabhupada did emerge from the followers of Srila Bhaktivinoda Thakura and Srila Bhaktisiddhanta Sarasvati Thakura to fulfill the desire and prediction of Sri Chaitanya Mahaprabhu.

Yet this entire arrangement, from one point of view, was created simply to fulfill the desire of Sri Advaita Acharya. Sri Advaita Acharya was the one who so intensely desired that the Lord should come and deliver the fallen souls, especially through hari-nama-sankirtana, that Lord Chaitanya did appear. And now, more than five hundred years later, we are gathered here in Camarillo, California, chanting the holy names of Krishna. This is possible only because Sri Advaita Acharya Prabhu desired so intensely that we would be able to do so and thus be delivered from the bondage of material existence and imbued with the ecstasy of devotional service.

So, although superficially the Hare Krishna maha-mantra appears to be a simple combination of three different words arranged in a combination of sixteen, actually it contains the entire spiritual world. And as we go deeper and deeper in chanting the maha-mantra, we come closer and closer to entering into the spiritual world and the pastimes of Radha and Krishna. Thus, what Lord Chaitanya came to give by the intense desire of Sri Advaita Acharya, although it appears to be very simple—just an arrangement of sixteen words—is actually deeply profound and unlimitedly vast. It is the entire spiritual world, in comparison with which the whole material world is just a fraction.

The whole process is inconceivable. We know the story of Mother Yasoda and baby Krishna. On Krishna’s birthday, Balarama and the cowherd boys accused Krishna of having eaten some dirt, and Balarama and other sons of the gopas complained to Mother Yasoda. But Krishna denied that He had eaten any dirt. To the contrary, He accused Balarama and the other friends of being angry with Him from Their play and wanting to get Him into trouble. He said, “If you have any doubts, Mother, you can look into My mouth and see if there is any dirt.” So, Krishna opened His mouth, and Mother Yasoda looked inside. And in Krishna’s mouth she saw the entire universe, the whole cosmic manifestation. She saw all moving and nonmoving entities and all directions. She saw past, present, and future. She saw the material elements and the three qualities of nature. She even saw herself and Sri Vrindavan-dhama, and she became completely bewildered.

Mother Yasoda saw the entire cosmic manifestation in the mouth of Krishna, while Krishna Himself appeared just like a small child that she could hold in her arms. In the same way, the entire spiritual world is contained within the two syllables Krs and na, because the two syllables Krs-na are Krishna Himself, the origin of everything. That is actually the invaluable gift of Sri Chaitanya Mahaprabhu upon the fallen souls, given to us due to the desire of Sri Advaita Acharya.

Sri Advaita Acharya is very merciful. Advaita means “nondifferent.” He is Advaita because He is nondifferent from Hari, the Supreme Lord (advaitam harinadvaitad). And He is Acharya because He preaches the cult of devotion (acaryam bhakti-samsanat).

We are followers of Advaita Acharya. He is one of the acharyas in the line of Sri Chaitanya Mahaprabhu. Actually, He was initiated by Sri Madhavendra Puri and therefore is in the same generation of spiritual masters as Sri Isvara Puri, the spiritual master of Chaitanya Mahaprabhu Himself. Nevertheless, in one sense we can say Sri Advaita Acharya is in the line of Lord Chaitanya because He considered Himself to be His servant.

So He is acharya—Advaita Acharya. Not only did He induce Sri Chaitanya Mahaprabhu to descend to deliver the fallen souls through the holy name, but He also set the example how one can be acharya. Even as a grihastha, He was an acharya. Most people, especially in Kali-yuga, marry and become householders. Therefore, the example of Sri Advaita Acharya is most important for us. In some ways, His example may be even more relevant for most people in Kali-yuga than the example of Lord Chaitanya, who renounced family life at an early age, or that of Nityananda Prabhu, who as an avadhuta was beyond all material categories.

Thus, we all have been blessed by the mercy of Advaita Acharya, directly and indirectly. We should take advantage of His mercy and of the mercy He caused to descend from the spiritual world for us. We should serve Him with great love and affection.

Devotee: Some of Lord Chaitanya’s devotees went and stayed with Him in Jagannatha Puri. So why not Advaita Acharya?

Giriraj Swami: Advaita Acharya was a grihastha, so He remained in Bengal. But when the other devotees would travel from Bengal to Orissa to join in the Ratha-yatra festival and spend the four months known as Chaturmasya with Chaitanya Mahaprabhu in Puri, He would accompany them. But then He would go back. It was really just the renunciates who were able to join Chaitanya Mahaprabhu. Some of them were married previously but joined later. Advaita Acharya, however, as far as we know, remained based in Bengal.

Actually, all the members of the Pancha-tattva more or less concealed their glories. It was only later that the devotees gradually realized their positions.

So, I conclude with a beautiful verse from Sri Caitanya-caritamrta (Adi 1.13):

“Because He is nondifferent from Hari, the Supreme Lord, He is called Advaita, and because He propagates the cult of devotion, He is called Acarya. He is the Lord and the incarnation of the Lord’s devotee. Therefore I take shelter of Him.”

1 Comment to “ The appearance day of Sri Advaita Acarya”