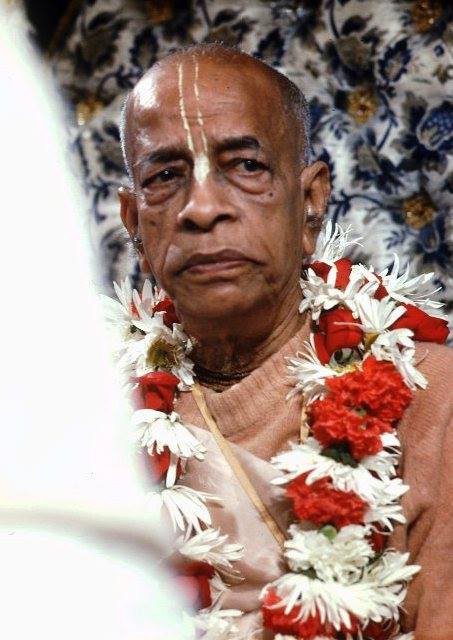 By His Divine Grace A. C. Bhaktivedanta Swami Prabhuapada

Lecture given in Vrindavan, India, November 4, 1976

Because we are ignorant of the subtle laws of nature, our endeavors for happiness in this world often only add to our distress.

“Due to ignorance, the materialistic person does not know anything about his real self-interest, the auspicious path in life. He is simply bound to material enjoyment by lusty desires, and all his plans are made for this purpose. For temporary sense gratification, such a person creates a society of envy, and due to this mentality, he plunges into the ocean of suffering. Such a foolish person does not even know about this.”
—Srimad-Bhagavatam 5.5.16

The whole world is based on the principle of enviousness, anyonya-vairah. And what is the result of this enviousness? Sukha-lesha-hetu: temporary happiness.

The nature of the material world is that so much fighting goes on between nation and nation, person and person, community and community. Despite so many legal codes, people fight with one another. The United Nations was created to stop fighting between nations. But what is the United Nations? I have already explained many times: It is an assembly of barking dogs. That’s all. “United” Nations—they will never unite. They will go there and bark. Many times we have seen nations show their enviousness there.

Despite the United Nations, such fighting still goes on. Why? Ananta-duhkham ca na veda mudhah: People create unlimited misery for themselves, but they do not know it. People are rascals. They claim rights to property and they fight.

They are forced to do it because they have been placed in the material world, which creates a condition of suffering. Lord Krishna says in the Bhagavad-gita (7.14) daivi hy esha gunamayi mama maya duratyaya: “This divine energy of Mine, consisting of the three modes of material nature, is difficult to overcome.” I have given this example many times: In school the teacher engages two naughty boys to grab and pull each other’s ears. Similarly, nature engages souls in the material world. People have manufactured ugra-karma—”horrible works”—for the annihilation of this world. Russia has the nuclear weapon, and the Americans too. They are looking for the opportunity to drop the bomb here and there, and everything will be destroyed. People do not know the aim of life. They engage in ugra-karma and create enmity.

In the Srimad-Bhagavatam (7.9.43) Prahlada Maharaja has said, shoce tato vimukha-cetasah: “I am simply concerned for these rascals.”As a Vaishnava, a devotee of the Lord, Prahlada Maharaja has no problems. A devotee will be satisfied if he has the opportunity to read and reciteSrimad-Bhagavatam anywhere, in any part of the world, even sitting underneath a tree. One who has education can read Srimad-Bhagavatam. But even if one has no education and cannot read, still he has no problem. He can chant: Hare Krishna, Hare Krishna, Krishna Krishna, Hare Hare/ Hare Rama, Hare Rama, Rama Rama, Hare Hare. He can enjoy anywhere.
The Illiterate Brahmana

There is a practical example in this connection. While Sri Chaitanya Mahaprabhu was touring in southern India, in the Ranganatha temple He saw an illiterate brahmana trying to read the Bhagavad-gita. Many people were coming and criticizing him.

“Well, brahmana, how are you reading Bhagavad-gita?”

He did not reply.

Chaitanya Mahaprabhu approached him and saw that the brahmana was looking at the Bhagavad-gita with tears gliding down his cheeks, so He could understand, “Here is a pure devotee.”

He asked him, “Well, brahmana, what you are reading?”

The brahmana replied, “Sir, I cannot read. I am illiterate and cannot read the Sanskrit.”

Chaitanya Mahaprabhu then asked him, “Then what are you doing?”

“My Guru Maharaja knew that I am illiterate, but he told me to read the Bhagavad-gita every day. So on his order, although I do not know what is written there, I am trying to read.”

“Oh, that’s very nice,” Chaitanya Mahaprabhu said. “You are carrying out the order of your Guru Maharaja. But it appears that you are crying. Why are you crying if you cannot read?”

“Because as soon as I take this Bhagavad-gita in my hand, I see the picture of Arjuna asking Krishna to place his chariot on the battlefield, and Krishna is driving the chariot on Arjuna’s order. Seeing this creates some feeling in me: ‘Oh, Krishna is so kind, so nice. Although He is the Supreme Personality of Godhead, He is carrying the order of His devotee as a servant.’ When I feel this, I cry: ‘Oh, how kind Krishna is! How merciful Krishna is!'”

Krishna consciousness does not depend on a literary career. A devotee is satisfied if he can think of Krishna. Krishna wants that: man-mana bhava mad-bhakto / mad-yaji mam namaskuru. “Always think of Me, become My devotee, worship Me, and offer your homage unto Me.” (Bhagavad-gita 18.65). Krishna never said, “Become a great pandita or grammarian to read Bhagavad-gita or Srimad-Bhagavatam.” If you are a pandita or grammarian, you can use your knowledge to read the scriptures. Otherwise, anyone, even a child, can do this: man-mana bhava mad-bhakto mad-yaji mam namaskuru. One can come into this temple and offer obeisances. That will also do.

Therefore a devotee can be satisfied in any condition of life, provided he can think of Krishna’s lotus feet. That’s all. That much.

Therefore Prahlada Maharaja said, “I have no problem in crossing the ocean of nescience. That solution is already there. Wherever I am I shall think of Your lotus feet. That’s all.”

Soce tato vimukha-cetasah: “I am thinking of these rascals who have rejected Your instructions in the Bhagavad-gita.”
Busy Wasting Time

People are making big, big plans to be happy like the monkeys. Therefore here it is said, arthan samiheta nikama-kamah: “He is simply bound to material enjoyment by lusty desires, and all his plans are made for this purpose.”

It is the duty of everyone to do something for his own welfare. But, as today’s verse begins, lokah svayam shreyasi nashta-drishtih: “These rascals are blind to their real interest.” Sreyas means real interest, and preyas means immediate profit. Nikama-kamah, sense gratification, is very nice immediately. “I enjoy sex life. This is very nice. Why shall I chant Hare Krishna? Let me enjoy sex.” Preyasi: “This is pleasure.” But it is not real pleasure; therefore the verse says nashta-drishtih, “without sight.” A rascal does not know that sense pleasure is not actual pleasure. It creates different types of miserable conditions. Nashta-drishtih. The rascal has no eyes to see this fact.

Take sex life, for example. The ignorant person does not know that it is the cause of suffering. There are two kinds of sex life, legal and illegal. Legal is sex in married life. And sex without marriage, like cats and dogs in the street or here and there, that is illegal. In spiritual life, legal sex is allowed. Krishna says, dharmaviruddho … kamo ’smi: “I am sex life according to religious principles.” (Bhagavad-gita 7.11) The scripture allows sex life for a married man and woman to create progeny. But illegal, illicit sex is most abominable. Still, in either case, illicit or legal, sex causes so much suffering.

Consider the sufferings caused by illicit sex. Now abortion, killing the child, is going on. That is very sinful. Those involved must suffer. But they do not know this. Ananta-duhkham ca na veda mudhah. They are taking the risk of suffering life after life. Those who kill the child within the womb will be punished. They will also enter the womb of a mother, somebody will kill them, and they will enter another mother’s womb and again be killed. They will go from one womb to another as many times as they have killed. They will never see the light of the world. That is the punishment.

But people do not know this. Ananta-duhkham ca na veda mudhah. They do not know how the laws of nature are working. A life for a life. You have no right to kill any life. You cannot kill even an ant. If you kill, then you have to suffer.
The Sage’s Punishment

These are not stories. There are many instructive incidents described in the scripture. Vidura was an incarnation of Yamaraja, the great lord of death, and a sage cursed him to be born as the son of a maidservant. Why? The sage was brought to the court of Yamaraja, and he was to be punished by having a lancet pierce through his rectum and out the top of his head.

The sage asked Yamaraja, “Why have you put me into this tribulation. Why have you given me this punishment? What is my fault?”

Yamaraja explained, “In your childhood you pierced the rectum of an ant with a nail. Therefore you must be punished like this.”

Just see. In childhood playing he pierced the ant. Sometimes we have seen children do that, and it counts. You cannot harm any animal, any living being. You cannot do that.

We should be very, very careful. We are implicating ourselves step by step. People do not know this. The material world is the place where at every step we create more difficulties: padam padam yad vipadam.

“For one who has accepted the boat of the lotus feet of the Lord, who is the shelter of the cosmic manifestation and is famous as Mukunda, or the giver of liberation, the ocean of the material world is like the water contained in a calf’s footprint. Param padam, or the place where there are no material miseries, or Vaikuntha, is his goal, not the place where there is danger in every step of life.”

How does one accept the boat of the lotus feet of the Lord? Sri Chaitanya Mahaprabhu has warned:

“For a person who is seriously desiring to cross the material ocean and engage in the transcendental loving service of the Lord without material motives, seeing a materialist engaged in sense gratification or seeing a woman who is similarly interested is more abominable than drinking poison willingly.” (Chaitanya-charitamrita, Madhya 11.8) Anyone who desires to render devotional service dedicates his life for the service of Bhagavan, Krishna. Krishna demands that. A person must decide, “Yes, I shall fully surrender to Krishna.” Such a surrendered person is nishkinchana, “one who possesses nothing.” “Surrender” means that one has finished all one’s material business. That includes karma, or fruitive work, as well as jnana, or philosophical speculation, and ordinary yoga. Bhakti, devotional service, means that one is done with all of these. One wants only to surrender to Krishna.

We have to become nishkinchana—no more material business. Who can do that? Bhagavad-bhajanonmukhasya: One who is eager to serve the Lord.

In the Bhagavad-gita (9.3) Krishna says, “If you do not come to Me, if you do not accept Me, then you will continue the cycle of birth and death.” And that means ananta-duhkham: life after life, your suffering will go on.

We should be very, very careful not to waste this human form of life even for a moment. That is real life. Rupa Goswami has written,avyartha-kalatvam: A devotee should always be alert to see, “One moment has passed. Did I waste it or use it well?” That should be the point. Ayushah kshana eko ’pi na labhya svarna-kotibhih. Canakya Pandita has said that one moment of our life cannot be returned in exchange for millions of dollars. Those who are advancing in spiritual life—how careful they should be! Therefore Rupa Goswami has given the formula avyartha-kalatvam: Not a single moment should be wasted without chanting Hare Krishna.

Thank you very much.

The Day I Dressed Radha Gopinath

﻿The Duties of a Sadhaka