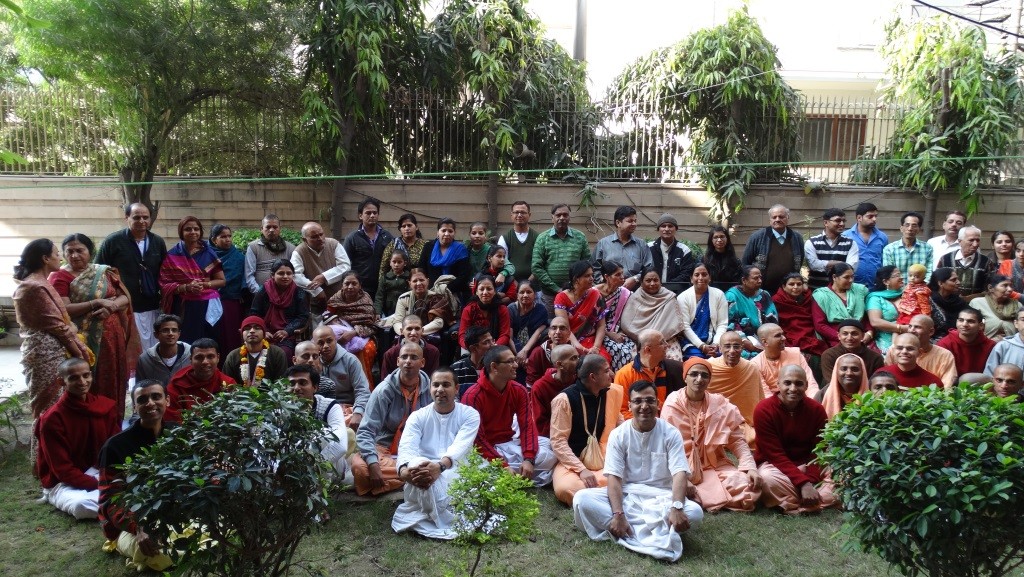 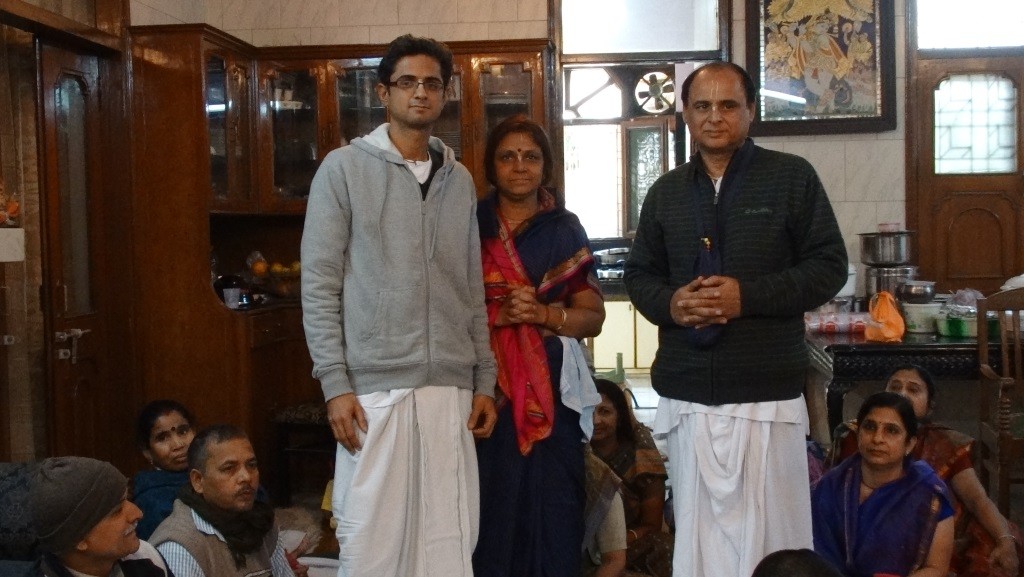 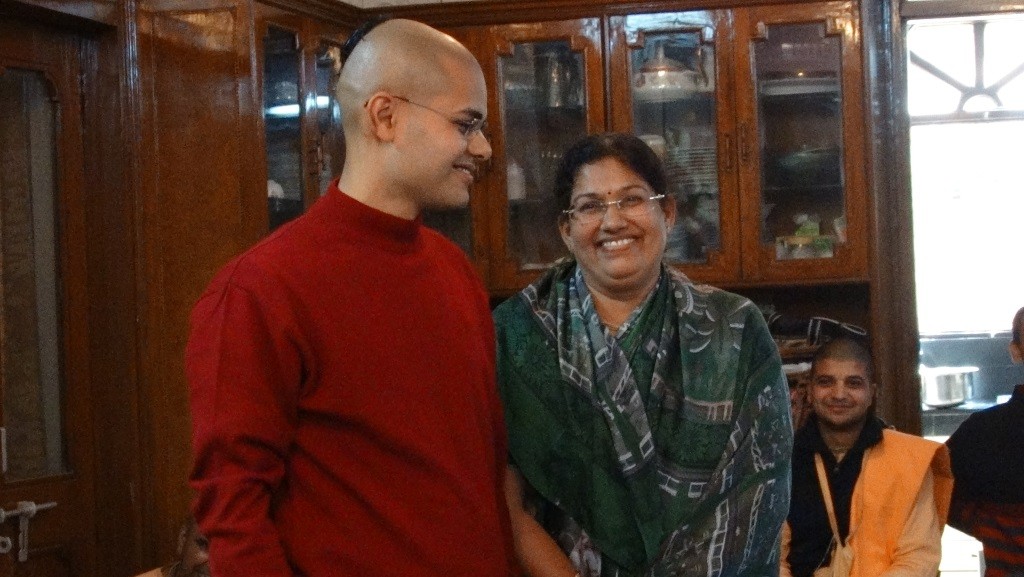 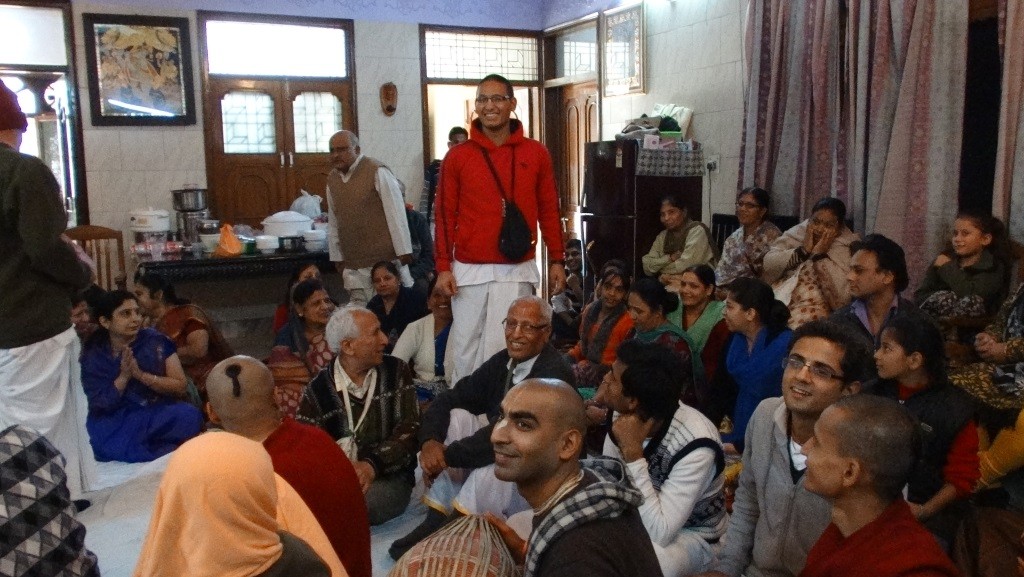 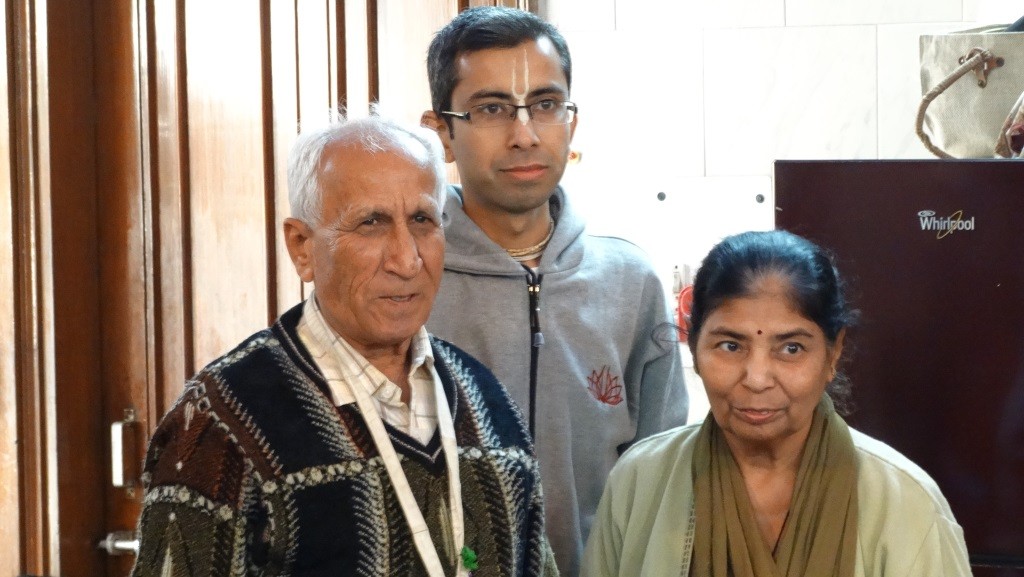 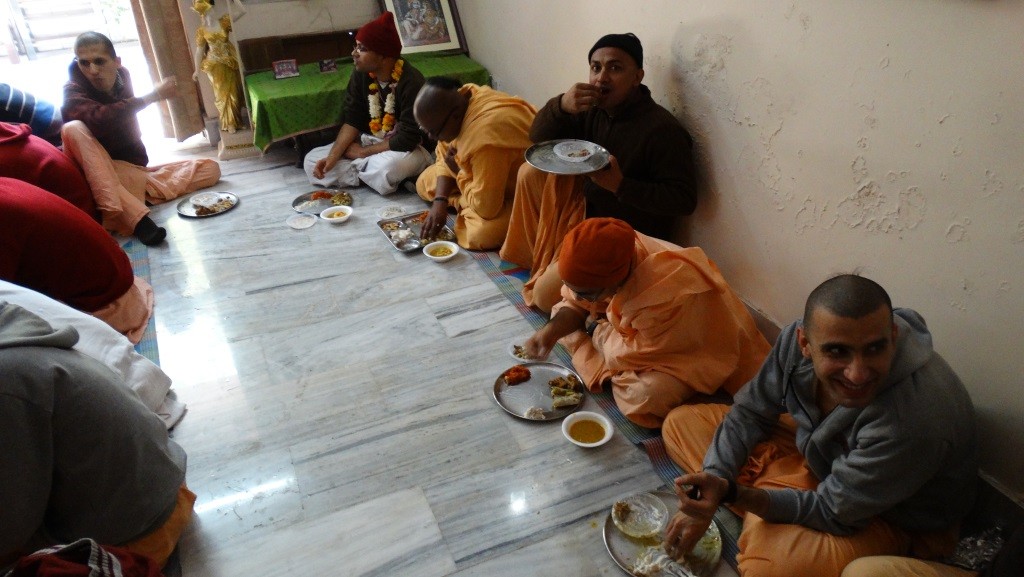 Ever heard of “Brahmcharis” and their “Parents” coming together……to chant and dance in ecstasy……Sharing Gratitude and Joy…….Acknowledging each other’s contributions and difference of opinions…..with all mothers cooking a Grand feast in honor of their sons who are currently serving under the shelter of Srila Prabhupada ??

This was visible at ISKCON Punjabi Bagh, where a Festival was organized(for the second time) at the home of one of devotee neighbor for honoring the parents of full time Devotees.

Parents/Relatives of all Brahmcharis were invited to this Program which intended to inspire everyone for coming together and joining a much bigger family of “Krishna & Srila Prabhupada ”……Nobody has lost anything but have gained…..Brahmcharis have gained more parents and Parents have gained more sons…

The first step(challenging though) was Invitation….whom to invite? There are parents who initially objected to their sons choosing a spiritual path but seeing their son’s sincerity and pure life of many seniors in Ashram, their hearts melted and presently they themselves are initiated members. Some are indifferent to process of Krishna consciousness and some perceive that ISKCON has separated their sons from them and are unfavorably disposed towards ISKCON. Devotees have tried though over the years to cultivate whole family in Krishna Consciousness. Seeing the intention of program and honest purpose, it was decided …everyone should be invited.

Many mothers came together early morning for preparing a grand feast for their sons. The program began with a melodious Kirtans and Dance….but wait….not everybody knows each other….who is whose parents and relatives?

Everyone was then introduced….First the devotee and their services/specific qualities and his parents/relatives. One of the members only suggested a name to this annual program: “Matra- Ashirwad” (Mother’s Blessings Program)

Then the mic was to be handed to each parent…to describe something about their son or from their childhood which everyone is generally unaware off….And as one description came after another from parents about their son’s childhood….the entire audience(esp Brahmcharis) were rolling on Ground…laughing and laughing to their hearts content..….nobody knew this “other” side of devotee’s life.

But all the laughter came to a halt when one of the Parents expressed his anger/ grief about how his son has quit his job and left his family to join Full Time Monk. Can’t Bhakti be done while staying at home…? You are serving statue in temple leaving aside “living” parent….Did Lord Ram not took care of their parents? Yes, and joined another member who starting accusing that his son has been “Brainwashed” ….My son should earn, should purchase car and on that car we both can come to temple from home….

Talks turned into scream and cries from some of member….environment turned tense…what to do? Should the program be ended now and everybody leaves…?

Of course, such reaction was expected…in fact we only invited everyone irrespective of their inclinations towards Devotional Service…. but didn’t expect to go to such an extent…..

But something miraculous started happening then….something which nobody expected or thought of….started coming out spontaneously…..

One of the devotee’s relative took the mic and explained how ISKCON is infact helping and protecting youth from the influence of destructive habits like drinking/smoking/ drugs etc which are a common scene nowdays in any college or their hostels. She explained how his son an IAS Officer, son pursiewing engineering from esteemed college and wished that his son become a devotee in ISKCON.

Then another father stood up and explained how he has personally seen the conditions of his son’s batchmates in Delhi Technical University(DTU) and colleagues at company…..how they have been addicted and expressed gratitude to ISKCON for saving his son. Everybody laughed when he said, “If I had come to KC earlier , I would have been full time Monk”.

And then one after other, different parents started expressing such words of gratitude and their joy in seeing their sons engaged in protecting and preaching the path of Dharma that left even devotees mesmerized hearing such words from their parents.

One of the devotee also expressed apology over his relationship with his parents since joining Ashram and expressed his resolve to connect with them on a much deeper level and more favorably.

Temple President, HG Rukmini Krishna Prabhu, then gave a brief talk to all the assembly, empathizing, explaining and clarifying all the concerns of parents, importance of Krishna Consciousness and coming together as a community centered on the principles of Srimad Bhagawat Gita.

And then there was tumultuous Kirtan to which everyone rose and danced….wildly.

And finally much awaited part of the program….Grand Feast Prasad…. Devotees and parents served together and took Prasad together…

In the end all parents were given a Gift as an appreciation for their presence. There was then a lot of informal sharing, discussion, appreciation; exchange of affection……many even expressed their desire for next program or even a combined tour of devotees with their parents. Even Parents who expressed their grief over their son’s choice of leading spiritual lives were seen participating in Kirtan, interacting with other parents, devotees & exchanging phone numbers.

Seeing their parents happy and supporting them, devotees experienced within their hearts tremendous joy, unity, harmony and confidence in their own spiritual journey.

A Rain Of Mercy in the Gobi Desert (photos)