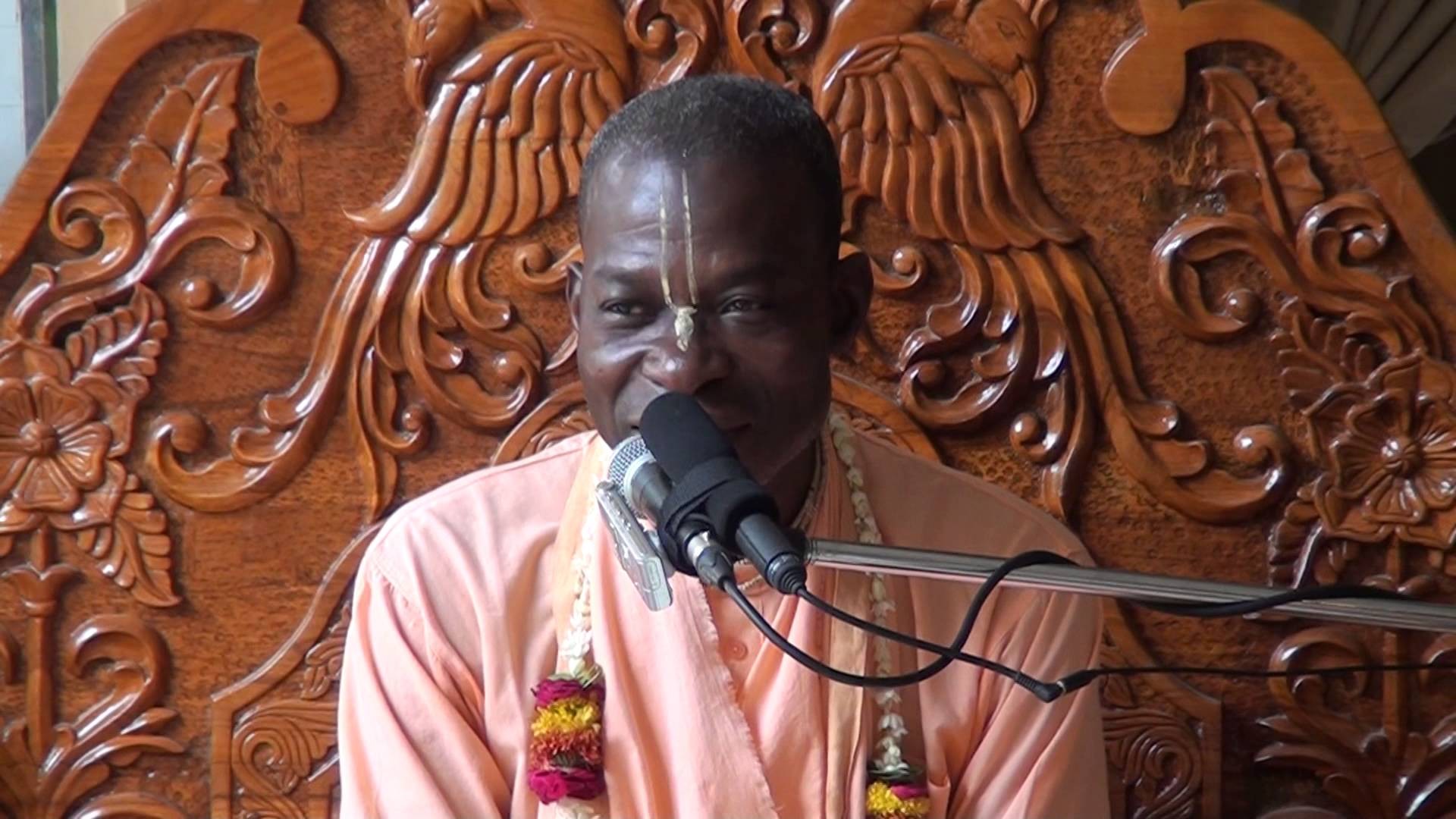 When one’s consciousness is completely purified of the contamination of material existence, gross and subtle, without being agitated as in the working and dreaming states, and when the mind is not dissolved as in susupti, deep sleep, one comes to the platform of trance. Then one’s material vision and the memories of the mind, which manifests names and forms, are vanquished. Only in such a trance is the Supreme Personality of Godhead revealed. Thus let us offer our respectful obeisances unto the Supreme Personality of Godhead, who is seen in that uncontaminated, transcendental state.

There are two stages of God realization. One is called sujñeyam, or very easily understood (generally by mental speculation), and the other is called durjñeyam, understood only with difficulty. Paramatma realization and Brahman realization are considered sujñeyam, but realization of the Supreme Personality of Godhead is durjñeyam. As described here, one attains the ultimate realization of the Personality of Godhead when one gives up the activities of the mind — thinking, feeling and willing — or, in other words, when mental speculation stops. This transcendental realization is above susupti, deep sleep. In our gross conditional stage we perceive things through material experience and remembrance, and in the subtle stage we perceive the world in dreams. The process of vision also involves remembrance and also exists in a subtle form. Above gross experience and dreams is susupti, deep sleep, and when one comes to the completely spiritual platform, transcending deep sleep, he attains trance, visuddha-sattva, or vasudeva-sattva, in which the Personality of Godhead is revealed.

Atah sri-krsna-namadi na bhaved grahyam indriyaih: as long as one is situated in duality, on the sensual platform, gross or subtle, realization of the original Personality of Godhead is impossible. Sevonmukhe hi jihvadau svayam eva sphuraty adah: but when one engages his senses in the service of the Lord — specifically, when one engages the tongue in chanting the Hare Krsna mantra and tasting only Krsna prasada with a spirit of service — the Supreme Personality of Godhead is revealed. This is indicated in this verse by the word suci-sadmane. Suci means purified. By the spirit of rendering service with one’s senses, one’s entire existence becomes suci-sadma, the platform of uncontaminated purity. Daksa therefore offers his respectful obeisances unto the Supreme Personality of Godhead, who is revealed on the platform of suci-sadma. In this regard Srila Visvanatha Cakravarti Thakura quotes the following prayer by Lord Brahma from the Srimad-Bhagavatam (10.14.6): tathapi bhuman mahimagunasya te viboddhum arhaty amalantar-atmabhih. “One whose heart has become completely purified, my Lord, can understand the transcendental qualities of Your Lordship and can understand the greatness of Your activities.”

I am feeling very uncomfortable, shy to speak in presence of exalted senior devotees. But because it is a service I will try to say something.

Lord Krishna is beyond our senses, beyond our mind and inteligence. Therfore it is not possible for conditional soul to atain Krishna by the strength of intelligence, mind or the senses. So the process of Paramatma and Brahman realization is a cheap process. So it is said here, it is sujñeyam, very easily understood. There is another process to attain Krishna which is, durjñeyam, very difficult to attain. It is difficult becase it is not cheap. One has to undergo a little discipline to come to the stage of realizing Krishna as He is. That is towards the process of bhakti, devotion to Lord Krishna.

“…when one engages his senses in the service of the Lord — specifically, when one engages the tongue in chanting the Hare Krsna mantra and tasting only Krsna prasada with a spirit of service…”

Lord Krishna explained that in the Eleventh Canto to Uddhava –

“My dear Uddhava, pure devotional service is like a blazing fire. Anything which is offered in the fire will be turned to ashes”

Therefore the devotees of Krishna can attain perfection because they are burned by the fire of bhakti, which is indicated in this way, suci-sadmane….

“By the spirit of rendering service with one’s senses, one’s entire existence becomes suci-sadma, the platform of uncontaminated purity.”

Therefore Daksa having understood the position of Krishna through devotional service is offering his prayers for Lord Krishna here. And then Visvanatha Cakravarti Thakura, he said,

Why did he take risk?

‘I want to show to the devotees my conviction in Krishna consciouness. That Krishna consciousness works and according to the level of our purity we are going to serve Krishna on that platform.”

Krishna is understood at different levels. And according to the level of our knowledge we also sacrifice like that. So HH Bhakti Tirtha Maharaj took a lot of risk in his Krishna consciousness in Africa. He took a lot of risk.

In Africa he has different ways of preaching Krishna consiousness. He preaches radio, television, newspapapers, magazines, in the temple, in churches, mosques and group spiritual debate where all the religious leaders will come together to disuss who is God. He would select a topic, who is God and then different organizations would bring their pholosophy. Bhakti Tirtha Maharaj would present the Krishna conscious philosophy. And others will stop speaking. He would take the class to the end. (laughter) Other groups would feel very embarassed, they have nothing to offer. At the end all the questions are directed towards him.

One day one of them said,

“No, this is my position. I cannot come to your level.” (laughter)

This he preached many times. In television he was very very popular. Everybody knows him. So one day, HH Kavichandra Maharaj came and I was taking him to a different city. In Nigeria we have domestic flights, you don’t have to book. You can just go there and take any one available and fly. So that day I didn’t book on time. I was planning that we will go ahead of time to the airport so that I can book the flight which is available at that time. Somehow or other Maharaj told me when we are about to leave he wants to see another friend. My heart caught, because I knew by the time we finish with this friend I get to the airport we will be late. I was also having no courage to tell Maharaj, no! no! better go to the airport.

I looked back and out of a sudden a lady just said, Hare Krishna!

And I look at her. She said, “Where is your Guru? I love him. Everytime he is on television I will stop everything to watch what he has to say. Now I want to see him in person.”

By then Gurudeva has already left the planet.

So immediately I told her, “He is not here now but his brother is here and he has no flight. Can you help me?”

Immediately the lady said, “Come with me.”

So she took Kavichandra Maharaj to travel. Because of Gurudeva’s preaching, I was saved from the difficulty. He was so popular. People know him, even today…..because of his popualarity in presenting, preaching Krishna consciouness.

Another time, I want to tell you the difficulties he passes through. Everytime we hear about how he is having kirtana, how he is preaching, how he is capturing people’s mind, he is also having so many difficulties in preaching in Africa.

A God brother has difficulty in following principles. Gurudeva removed him from his service. He became very angry and he started negotiating with other devotees who have same difficulty like him. And then they met one of our members who has material position at that time. He was in the Government. So he started attacking Gurudeva physically by assaulting him, he wrote letter to GBC body, and so many people were sent to go and investigate him. But he was never disturbed.

For Bhakti Tirtha Maharaj difficulties are very very good. He doesn’t see anything which is difficult. He likes difficulties. Why? That is the time for him to prove his faith in Krishna. How much faith I have in Krishna is proved not at the time of peace but when things are difficult. He said like this and lives his life like that. He said,

When you have challenges that is the time to prove how much faith you have in Krishna. So he told one devotee,

“How is your temple?”

“Gurudeva there are so many difficulties!”

He said, “Yes, that is very good!” (laughter) I would have created problems for you if you didn’t have difficulties in the temple.” (laughter).

Because if there are no difficultes the tendency is to relax. Everything nice and comfortable. When times of difficulty, at that time devotees prays to Krishna for help. So he liked challenges. Challenges he enjoyed. So when he was having these difficulties he didn’t see it as anything disturbing. And the difficulty continued and build up to become a serious problem, the temple was divided into two. One party was following him and other party was following the other devotee.

So one day I asked him,

So he looked at me, he said,

“No! I give you only two weeks, they will finish.” (laughter)

And that’s what happened. After two weeks they fought with each other and that was the end.

I was thinking that this would disturb him from continuing his preaching in Africa. No! He went and he came back.

“Gurudeva, don’t you think it is risky for you?”

So he preached Krishna consciousness till he left this world. Today is the 10th yr he left this planet. Sorry… this year is the 10th year of his leaving the planet. But today is his vyasa puja. So we are having the ceremony at the community hall and invite you all to come.

Comments questions, we have two minutes!

Devotee: Maharaj, you said that Paramatma realization and Brahman realization is selfish and devotional service is not selfish. Can you please explain?

Being cheap here means the thing that is the way to get (?) Krishna. The way to get Krishna is different. We need to be purified. With a purified heart we can serve Krishna. Devotional service begins at the purified stage. So when we say devotee, we are talking about pure devotee. One whose activites give Krishna pleasure, not the practioner, a pure devotee. His activites have no contamination. His activity will please Krishna because it is rendered out of love for Krishna. Not with the intention of getting something from Krishna. So Bhagavan realization is complete. It is durjñeyam process but difficult.

The all-powerful Personality of Godhead in His boar incarnation