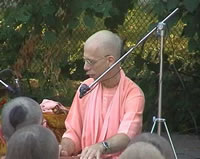 After a short kirtan, reading and appreciation of HH Bhaktisvarupa Damodara Swami Kripamoya das, co-chairman of the meeting along with Mahadyuti das, gave a short introductory address.

He focused on the benefits of unity and our collective responsibility to improve ISKCON’s fortunes in Europe.

“Whether we lead 5, 10 or 100’s of devotees there are others who are also looking to us to improve their lives and their futures”

He compared a healthy body to an organisation and stressed that if any aspect of the organisation was not in good health then that would ultimately effect the whole organisation.

He closed by thanking all the devotees for taking the time out of their busy schedules and travelling to Prabhupada Desh in Italy for this annual gathering.

The first item on the agenda was a report on developments in the French yatra. Last year a team of devotees came together and began what was termed ‘Renouveau du Yatra Francais” . Different devotees involved in this effort talked about some of the progress made to date. Param gati swami spoke about the new preaching centre that was opened earlier in the year in the Monmarte area of Paris. Sivarama swami spoke about how book distribution was on the up and up and how this September was the biggest month for book distribution in France for many a year. Praghosa dasa gave an update on the fundraising efforts to secure a new home for Sri Sri Radha Parisisvara and the urgency of doing so as They are presently residing in a house that most devotees would not be prepared to live in. So far between laksmi received and pledges made we have in the region of €450,000 as well as the offer of a loan of another €500,000. Praghosa wanted the assembly to know how appreciative the Renouveau team are of all the donors that have come forward to date.

Next up was a three person presentation entitled ‘Wages for Sages’. This presentation set about addressing the issue of paying salaries to devotees for services rendered.

First to speak was Prahladananda swami who presented many quotes from Srila Prabhupada which more or less made clear that there are little or no grounds for devotees to receive salaries for services rendered. He did mention that there maybe exceptional circumstances that would warrant this and Prabhupada also allowed this, but that the norm should be that ISKCON does not pay salaries.

Param gati swami had a differing view and made the point that one of ISKCON’s main responsibilities is to provide protection and shelter for it’s devotees. And that should not automatically exclude financial help if such financial help assisted in that process of shelter and protection giving. He observed that many devotees when they marry find themselves in a situation where they are all but forced to take on jobs outside of the association of devotees. Many of them would prefer if they could be gainfully employed by ISKCON, not for monetary gain but to stay in the sanga of the devotees. The monetary aspect would be needed just to cover their basic requirements.

Praghosa das came from a slightly different angle again and made the point that first we need to decide if we want a blanket ban on salaries or not. If we do then the discussion over. If we don’t, and the reality is that many ISKCON centres around the world do now pay salaries to devotees, then we need to establish a system that is acceptable to the broad devotee community and is also supported by sastra.

“The presidents must be very careful on recommending gayatri initiation. After all, we are criticizing false cast brahmanas, if we ourselves are bogus brahmanas then our position is very bad. Now that we are more and more trying to implement the varnasrama divisions of society, we should not think that everyone has to become a brahmana. For example you are developing a farm there; so those who work the farm do not necessarily have to be a brahmana if they are not inclined to the brahminical standards. In this way, be careful about awarding the second initiation.
Letter to: Sudama, Rome 26 May 1974

He concluded by saying that if we accept that ISKCON will be made up of all four varnas then perhaps any salary structure could be based on the varnasrama system:

Brahmanas – no salaries or assets, live by donations
Ksatriyas – levy taxes and in return look after those under their care
Vaisyas – keep some of the profit from their business efforts
Sudras – maintained by either the ksatriyas or vaisyas

Speech of the Minister for External Affairs Mr. S.M Krishna to the Members of Parliament against the banning of the Gita

The Story of Smita the Cow