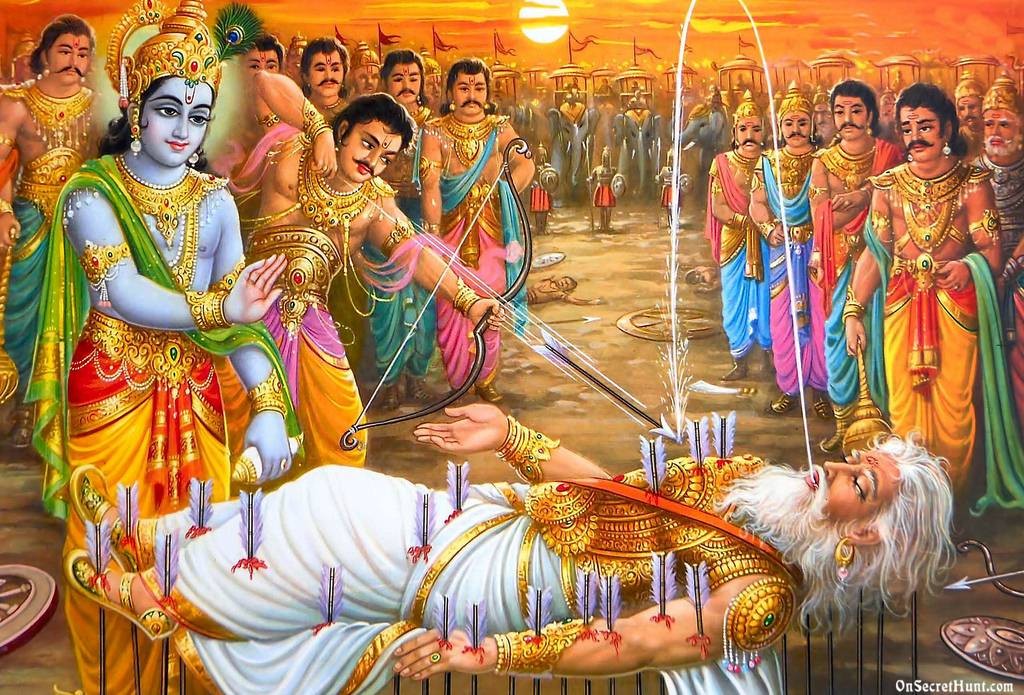 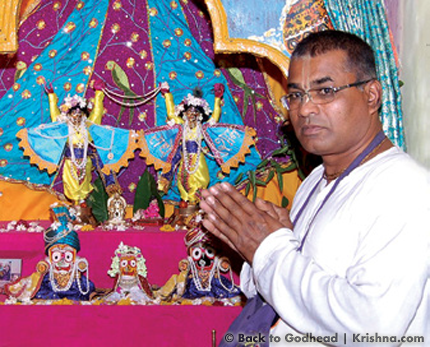 Every December, the book marathon promises to be an exciting event. While travelling from door to door, village to village, through remote parts of India, we invariably meet someone who has been miraculously touched by Krishna’s mercy. One such person was Chandu, whom we met in Srirampur, Maharashtra. His tall posture and heavy built contrasted with his soft, humble demeanor. Curious to know his background, I requested him to narrate his story of choosing the path of Krishna consciousness. Below is the story as I heard it from him:

Right from childhood, I had a quarrelsome behavior. My strong and stout body enabled me to bully others and fight with them. I would harass everyone and behave rashly. This made others hate and fear me, so many people kept their distance. As opposed to me was my father, who was a very soft and gentle person, a humble schoolteacher, devoted to tulasi and Lord Vitthala. Local people wondered how such a person would give birth to a tyrant like me.

At a very young age, I was nominated as the president of a political party. Lying, cheating, and manipulative dealings were my daily activities, and drinking alcohol and meat-eating became a part of my lifestyle. My father would spend his day in devotional activities, while I was engrossed in fights and sense indulgence. Many people advised my father to somehow transform my character, but all his efforts failed. Finally he got me married to a girl, hoping that after marriage I might change.

My wife had a tough time handling me. Frustrated with my brute behavior, she would often leave home to visit her parents. Meanwhile my corrupt dealings had risen to a higher level since I was promoted to a higher rank within the party. My father would often plead with me, “Dear son, please read Dnyaneshwari (a commentary on the Bhagavad-gita by Dnyaneshwar, a famous saint from Maharashtra) at least once in your life.” I couldn’t care less about this instruction. I was speeding towards the darkest region of hellish existence. I had opened a liquor shop and a non-vegetarian restaurant. Almost every night, I would spend time eating meat and drinking alcohol, and then I would return home and beat up my wife or create trouble in my neighborhood. My family life began to break into pieces. “A demigod father, a demonic son” this is how people addressed us.

Promise at the Deathbed

My father soon became terminally ill and was lying on his deathbed. Fully drunk and intoxicated, I went near him. He said these last words before leaving his body: “At least once you should read Dnyaneshwari.” I said I will, and then he left this world. Now that the last hindrance to my sinful enjoyment was gone, I fully dived into all kinds of indulgence unrestrictedly. Days passed, many months passed, and all the while, my father’s request kept surfacing in my mind repeatedly, and I would feel guilty of not keeping up my promise.

Finally one day I reluctantly decided to read this book. I entered the puja room, where I saw many sacred books bundled in a white cloth. I pulled out Dnyaneshwari and began to read it. Unfortunately, I found the language too archaic and the message too cryptic. I was about to keep the book back in its place and give up reading when I noticed Srila Prabhupada’s Bhagavad-gita As It Is along with some other small books in the same bundle. I thought, “Well, Dnyaneshwari is the same as Bhagavad-gita, so let me try reading the Gita instead.” I felt a special attraction towards the picture of Krishna and Arjuna, where Krishna is driving the chariot of His dear devotee.

I would read the Gita inside the bar and would simultaneously preach. Sitting on a chair and my legs sprawling over the table, I would hold a bottle of beer in one hand and the Gita in the other. My audience consisted of fully intoxicated drunks, who could barely lift themselves after their binge. . The discussion would sometimes go on till midnight. This “satsanga” program continued for about seven months.

On the Way to Krishna

The Bhagavad-gita instructs us to offer food to God before we eat it. Yajna-Sistasinah santo mucyante sarva-kilbisaih/ bhunjate te tv agham papa ye pacanty atma-karanat: “The devotees of the Lord are released from all kinds of sins because they eat food which is offered first for sacrifice. Others, who prepare food for personal sense enjoyment, verily eat only sin.” (Gita 3.13) I began to follow this instruction. Reaching home late night, fully drunk, I would wake my wife and ask her to prepare food. I am sure my method of offering food was not scripturally approved. When the food was ready, I would take the plate and keep it in front of the murti of Lord Krishna. And in half-asleep intoxicated state, I would order Krishna, “Eat!” The Bhagavad-gita had convinced me that God can accept food and eat it. But sometimes I would laugh at my crazy behavior, and I would feel that the murti is laughing back at me. Gradually I developed a desire to render some service to God. 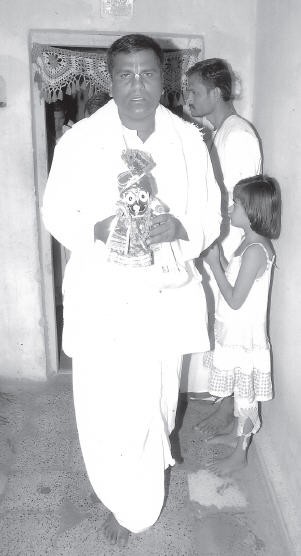 Caitanya Carana during the installation of Deities in his house

The Bhagavad-gita and Srila Prabhupada’s explanation continued to impress me more and more. I read how Krishna is pleased with anyone who tries to distribute His message to the masses. With this motive, I printed flyers containing the maha-mantra and short message of the Gita. While distributing these flyers in my village, the local villagers requested me to give a short speech. Although I spoke for a few minutes from the Gita, I understood that I need to follow the principles more seriously and lead a purer life.

Once when I visited Pandharpur, I saw a group of padayatra devotees travelling village to village doing harinama-sankirtana. Inside the bullock cart I saw a huge picture of Srila Prabhupada. I had seen many saints and godmen in many places, but I always doubted their authenticity and purity. When I saw Srila Prabhupada, however, I was convinced that this person is genuine, and I developed more faith in him.

Some days later, my friend Sudama visited my house. He said, “Do you know that in Pandharpur there is a temple of Lord Krishna, the speaker of the Bhagavad-gita? His Holiness Lokanatha Swami Maharaja is going to give a series of lectures. Why don’t you attend?” I was not sure what to say, but it seems some divine force pushed me to say yes. I thought, “Let me try it once. I don’t have to commit to their process. I can always come back if I don’t like them.” As soon as I entered the ISKCON temple in Pandharpur and met the devotees, I could feel I was undergoing a mystical transformation. I felt a sense of peace and happiness. Sitting through the entire discourse, I was convinced that this is the path I need to follow throughout my life. The seed of love and devotion were now firmly planted in the soil of my heart.

Upon returning to my village, I decided to begin a new life. I wound up my liquor and meat enterprise. I even gave up my political post and instead took up farming and agriculture as my profession. I started chanting the holy names of Krishna, the Hare Krishna maha-mantra, and began to follow the four regulative principles. It was amazing to see how I could easily give up my nasty habits. My family members were initially skeptical, unable to understand the change in me. Earlier all my actions were under the influence of alcohol, but seeing this miraculous transformation in my life, they were wondering if I was acting under the influence of something more dangerous. Every morning I started reading the Bhagavad-gita, and I introduced everyone in my home to the devotional way of life. After a few years, Lokanatha Swami Maharaja offered me spiritual initiation, giving me the name Caitanya Carana Dasa.

From Chandu to Caitanya Carana the story is amazing and hope-giving. It proves the power of bhakti, or Krishna consciousness: how it can raise anyone from the lowest level of ignorance to the highest level of enlightenment. And it also shows how potent Srila Prabhupada’s books are, and how if anyone comes in contact with them in any manner, he or she will get the ultimate benefit.

<!–Janakinatha Dasa is a resident monk at the ISKCON temple in Nashik. He teaches Krishna consciousness to college students.

The Power of Association (video)
Selfishness

From Chemical Solution To The Ultimate Solution

Radhastami – A Day to Get Down on Our Knees and Pray!

The Qualification to Hear