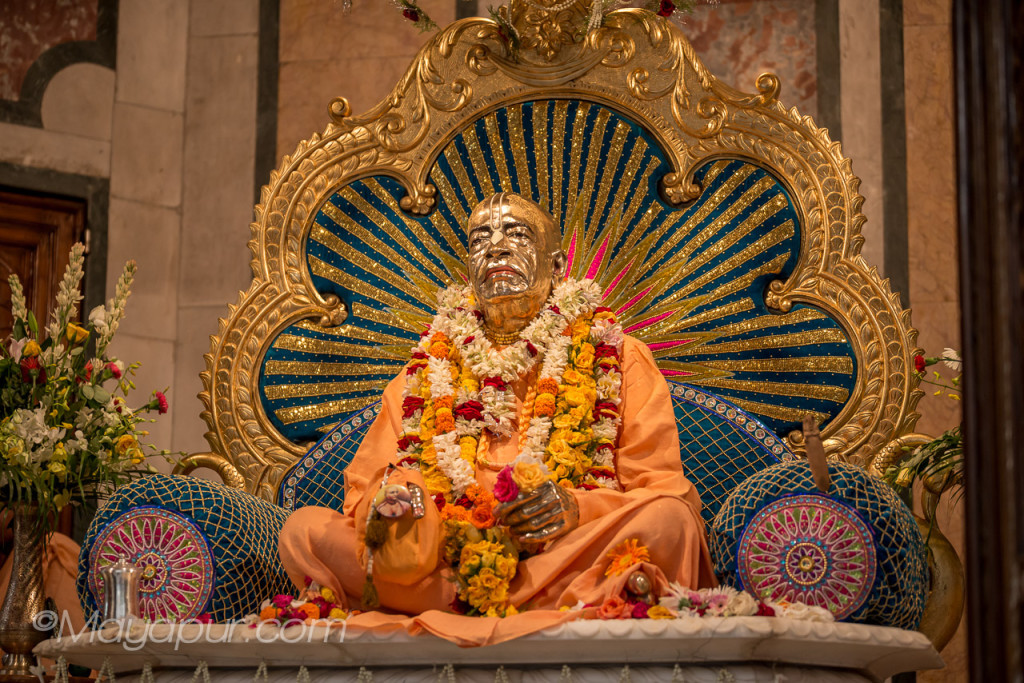 Many joyful adventures took place daily while traveling with Srila Prabhupada. So much nectar flowed from the regulated activities of personally serving our glorious Gurudeva. Who could imagine anything more wonderful than cooking, massaging and tending to the needs of His Divine Grace, except for being present when His Divine Grace exhibited ecstatic symptoms? It was the rarest of treasures. These exceptional events invariably took place while Srila Prabhupada sat on his Vyasasana in the temple room during his lecture. The most widely known took place during the Mayapur festival.

Hundreds of devotees were assembled in the temple room while Srila Prabhupada spoke. Suddenly, he stopped and became silent with his eyes closed. Everyone in the room became still, not wanting to disturb him. A pin drop could be heard. We didn’t dare breathe too loudly. This went on for some time. Hundreds of devotees were transfixed on His Divine Grace’s ecstasy, each being transported by his rapture. Our minds were overwhelmed with blissful anticipation. Srila Prabhupada carried us all to another realm.

Suddenly, one sannyasi seated near the Vyasasana began loudly chanting, “Nama om Visnu-padaya…” I felt jolted from a heavenly realm. Gradually, the reluctant devotees began to join in the kirtan. Soon, Srila Prabhupada regained his external consciousness and joined his disciples in the kirtan.

After the kirtan, there was disagreement amongst the devotees. Some criticized the sannyasi saying, “How could you do that? Srila Prabhupada was in ecstasy. You could see no one else was chanting. You should have stopped.”

“Srila Prabhupada,” Brahmananda Maharaja said. “Do you remember at the lecture when you stopped speaking and went into ecstasy?”

Before he could continue, Srila Prabhupada responded in the sweetest voice, sounding a little embarrassed.

“I do not do that very often,” Srila Prabhupada said.

As always, there is no way to properly describe how Srila Prabhupada spoke. When Srila Prabhupada said, “I do not do that very often,” it was the most innocent voice I had ever heard. The gentle grace and humility he displayed was amazing. He was apologizing for exhibiting the symptoms of a pure devotee. It appeared that Srila Prabhupada felt awkward exposing us to his ecstasy.

One of the most wonderful things about His Divine Grace was the way he always made us feel that if we just followed the process of Krsna Consciousness, then we could advance to the perfectional stage without difficulty. It seemed that he didn’t want to discourage us by showing how special he was, thus allowing us to consider Krsna Consciousness too difficult for neophytes. He gave us hope. He made us feel that Krsna Consciousness was for all of us. He always spoke of himself in the plural, “We are Krsna’s servant.” Srila Prabhupada included us. Just as he transported us on that special day in Mayapur, he continues to take us “Back to Home, Back to Godhead.”

Srila Prabhupada, thank you for a peek into your private ecstasy. I would have relished the opportunity to sit at your feet in that temple room for hours. I can only imagine where you were. I take great pride in knowing that you are the topmost personality within these three worlds. Still, you spoke humbly about revealing a glimpse of your ecstasy. I beg for the chance to hear your sweet voice again and again.