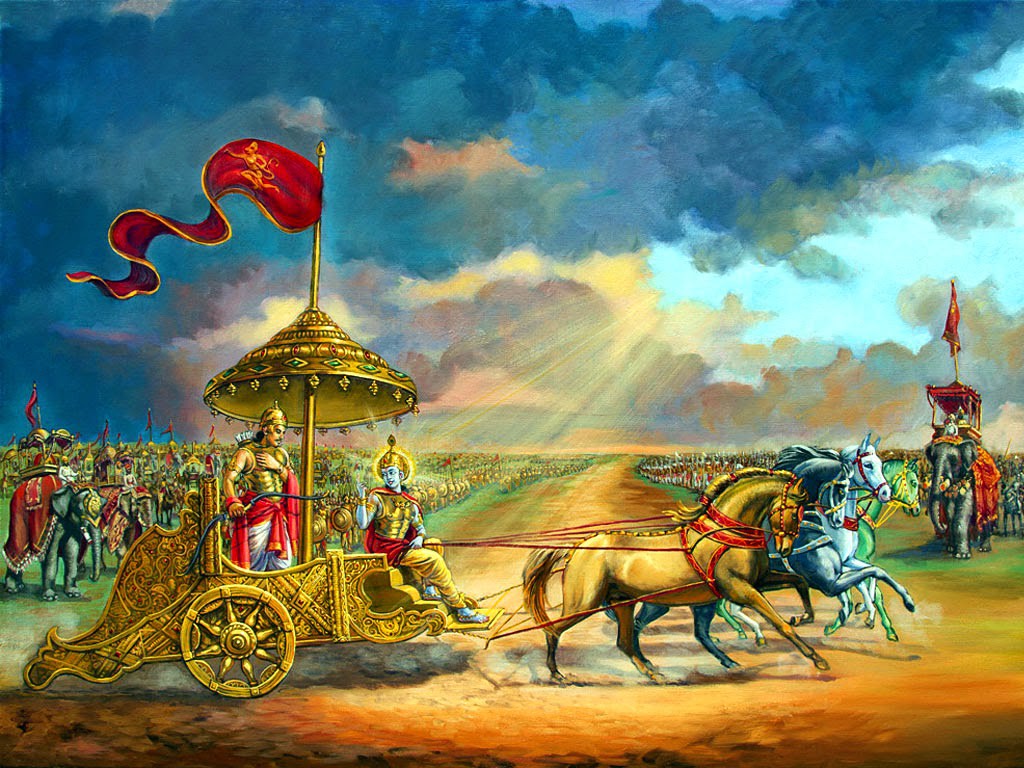 Sometimes we may question the suitability of the term “razor’s edge” when applied to the process of Krsna consciousness. Isn’t this too harsh? Shouldn’t Krsna be more kind and yielding to His devotees? Is there not a more suitable term that we could use?

That God displays features of unyielding and uncompromising hardness cannot be denied. In Bhagavad Gita Lord Sri Krsna says: “Those who are envious and mischievous, who are the lowest among men, I perpetually cast into the ocean of material existence, into various demoniac species of life” (Bg 16.19). Srila Prabhupada explains: “It is known that God is all-merciful, but here we find that God is never merciful to the demoniac” (Bg 16.20, purport).

Alright then, it may appear that God is hard and uncompromising with the demons but what of devotees who are on the path of Krsna consciousness?

Well the term: “razor’s edge” really only applies to the spiritual path, and therefore it would apply to devotees, in whatever stage of development they may be. In explaining the term “razor’s edge” Srila Prabhupada writes: “Not only must one come to the stage of pure Krsna consciousness, but one must also be very careful. Any inattentiveness or carelessness may cause falldown.…Factually, there is always the chance that this will happen, and therefore one has to be very careful” (SB 3.26.24, purport).

Therefore we are always on the razor’s edge, even when, by the mercy of Krsna-Guru-Vaishnava, we return back home, back to Godhead. Our original existence there is also on the edge of a razor – there is no room for inattentiveness or imperfection. Consider this statement by Srila Prabhupada: “Usually anyone who has developed his relationship with Krsna does not fall down in any circumstance, but because the independence is always there, the soul may fall down from any position or any relationship by misusing his independence” (Letter to Jagadisa February 27 1970). We are here in the material world because we fell from the razor’s edge.

To summarise the position: Spiritual life is the razor’s edge, for neophytes, for intermediate devotees, for devotees in the Spiritual World. The only difference between them appears to be how they accept it.

To highlight the point, one may briefly reflect upon a pastime of Lord Caitanya, the most munificent and compassionate incarnation of the Lord, and one of His intimate devotees, Chota Haridasa. Chota Haridasa, who was in the renounced order of life, at the behest of Bhagavan Acarya, a senior devotee, begged white rice from an elderly devotee lady named Madhavidevi, which Bhagavan Acarya subsequently offered to Lord Caitanya. Lord Caitanya honoured the meal, but later on told Govinda, His personal assistant: “From this day forward, do not allow Chota Haridasa to come here” (CC AL 2.113). When the devotees appealed to the Lord to forgive Chota Haridasa, the Lord replied: “My mind is not under My control. It does not like to see anyone in the renounced order who talks intimately with women. You should all tend to your respective engagements. Give up this useless talk. If you speak this way again, I shall go away, and you will no longer see Me here” (CC AL 2.124-125).

The Lord was inflexible in His chastisement of Chota Haridasa. None of the devotees, even Paramanda Puri, the Godbrother of His own Spiritual Master, could persuade Him to relent. At that time, the Lord immediately prepared to leave Jagannath Puri, but Paramanda Puri pacified Him with these words: “My dear Lord Caitanya, You are the independent Personality of Godhead. You can do whatever You like. Who can say anything above You? All Your activities are for the benefit of the people in general. We cannot understand them, for Your intentions are deep and grave” (CC AL 2.135-136).

There are many lessons which we can learn from this pastime if we adopt the attitude of Paramanada Puri. One of those lessons is given by Srila Prabhupada: “Sri Caitanya Mahaprabhu wanted to prove that His devotees are exalted and that their character is ideal. He kindly accepts His faithful devotees and teaches them how much tribulation and disturbance can be produced by even a slight deviation from the strict principles of devotional service” (CC AL 2, Instructions from this chapter).

So we are presented with at least three facts:

Now we may approach these facts in at least two ways: We can either feel that this does not match up to our notions of Goodness or Mercy, or we may choose to reflect on what these facts actually tell us about the real nature of Goodness and Mercy. If we choose the first approach we shall be forced either to deny the facts or to reject the world view from which they arise altogether. In either case, we shall be left with our unexamined notions of Goodness and Mercy.

If we choose the second path, the path enunciated by Paramananda Puri: that the Lord and His ways are inconceivable but we worship Him just the same, with full faith in Him as the very foundation of Goodness and Mercy, then we may just learn something.

There are some preliminary observations which may assist us in assimilating these facts:

The main reason why we might wish for the facts to be otherwise, for there to be something less harsh than a razor’s edge is because we recognise our own shortcomings. “Very well,” one might say, “Spiritual life is a razor’s edge, and God does not make compromises. I can’t do it. It is a hopeless task for me. Better to change paradigms.” To this view, I would suggest the following considerations:

The razor’s edge of spiritual life and the Lord’s uncommon character may be for us bitter pills to swallow, but by accepting them for what they are, on their terms, we regain our spiritual health and are fortified for rendering joyful service to the Lord. It is conceivable that those who have accepted the razor’s edge in that way eventually come to realise: they would not have wanted it any other way.