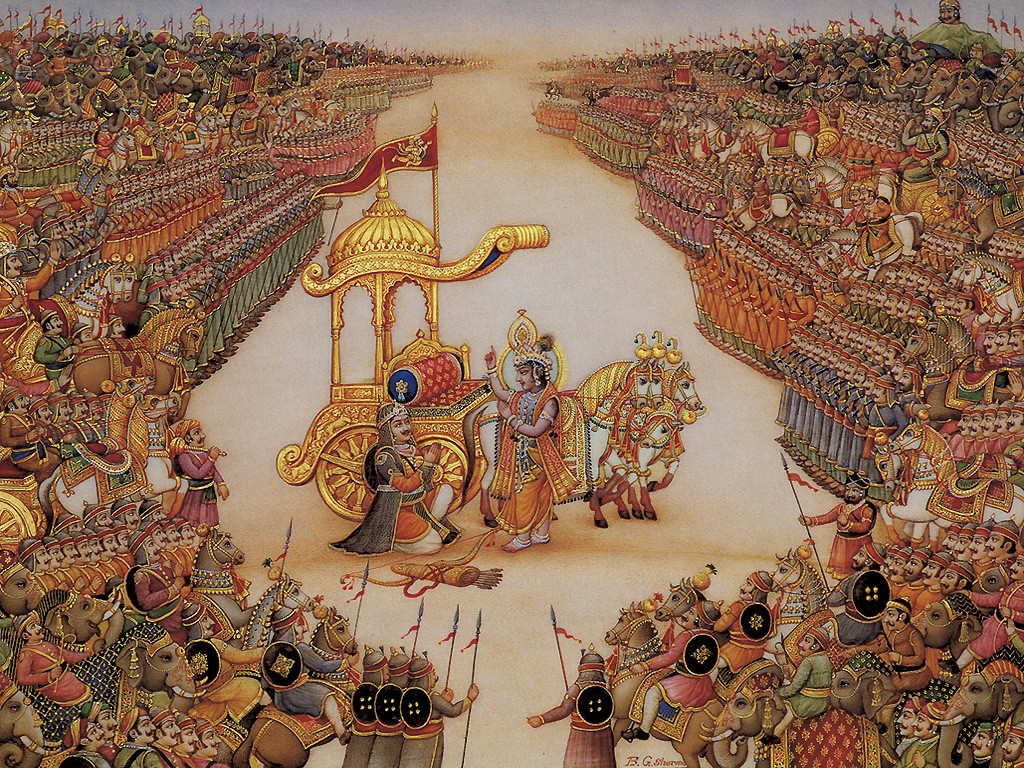 An ideal government will treat all its citizens, both humans and nonhumans, equally, without envy.

In the history of Mahabharata, there was a dispute in the same family who would occupy the throne. Dhrtarashtra was the eldest son of the king, and the next was Pandu, By the law of primogeniture, the eldest son becomes the king. In your country, England, even girl child, Queen Elizabeth, also occupies the throne. Formerly there was Queen Victoria; before that, another Elizabeth. But in India woman has no such right. The general regulation is that woman should remain under the protection of father, husband and children. Just like these Pandus, their mother, Kunti, was a very qualified lady. But stili, after the death of her husband, she always remained with the sons. When the sons went to the forest, she also went. Their wife, Draupadi, also accompanied them.

Dhrtarashtra was the eldest son, but he had a bodily defect he was blind. Therefore he was not awarded the throne. His next brother, Pandu, was offered the throne, but he died at an early age, while he was a young man. When the Pandavas – Yudhisthira, Bhima, Arjuna, Nakula, Sahadeva – were small children, they were taken care of by Dhrtarashtra and other elders like Bhishmadeva, the grandfather of the Pandavas. Bhishma was the elder brother of Dhrtarashtra’s father, and the kingdom belonged to him. But he remained a brahmachari, unmarried. Therefore his nephews, Dhrtarashtra and Pandu, became the inheritors.

After the death of Pandu, there was a conspiracy. Dhrtarashtra felt, “Actually, this is my kingdom. Somehow or other, I could not get it. Now my brother is dead. So if I do not inherit, why not my sons?” This was the politics. Politics is always there, accompanied by enviousness, jealousy. This is the nature of this material world. You cannot avoid it. Spiritual world means just the opposite. There is no politics, jealousy, or enviousness. That is spiritual world. And material world means politics, jealousy, diplomacy, enviousness so many things. This is material world. So even in the heavenly planets, these things are there. Even in animal kingdom, politics is there. This is the nature-matsarata. Matsarata means enviousness. One man is envious of another man. It doesn’t matter, even they are brothers or family members. Here the family members, Dhrtarashtra and Pandu, were two brothers of the same family, but the enviousness crept in.

So the Krishna consciousness movement is not for the persons who are envious. It is a movement to train people how to become non-envious. Yes, it is very first-class scientific movement not to become envious. Therefore Srimad-Bhagavatam (1.1.2) in the beginning declares dharmah projjhita-kaitavoatra. In this Srimad-Bhagavatam, dharma, cheating type of religious principle is completely eradicated, thrown away, projjhita. They are kicked out, projjhita. Just like you collect all the dirty things from the room, sweep them and then kick out; you don’t keep it within the room. Similarly, cheating type of religious system kicked out. It is not such religion, “this religion,” “that religion.” Any religion system, if there is jealousy, it is not religion. We should understand what jealousy is. Jealousy means that you are rightful owner of something; I won’t allow you to take it. This is jealousy; try to understand it. Suppose you are the rightful owner of something, and I am trying to own it, that is jealousy.

So what is the rightful ownership of the living entity, what is our birthright? That is to be understood. Everyone has a right to live under the protection of the government. A good government should give security of life and property to everyone, to both humans and non-humans. Not that I give protection to my brother, and not to others. Just like Pariksit Maharaja: he was giving protection to the animals also. When he was on his tour, as soon as he saw that a black man was trying to kill one cow, he immediately took his sword and challenged, “Who are you? You are trying to kill?”

So this is good government. The government must be equal to everyone, just as God is equal to everyone. The king or the government must be the representative of God. Therefore, according to Vedic civilization, the king is offered as good respect as to the Supreme Personality of Godhead. The king is called nara-deva, which means”God in human form,” because he acts as the representative of God. He cannot be jealous to any living entity, at least, to those born in his kingdom. Praja means one who has taken birth, or, in other words, national. So that was the duty.

So here, Dhrtarashtra is jealous. He cannot give any good government. Krishna knew it. Krishna sent a messenger, Akrura. You have read in the Srimad-Bhagavatam. Before this Battle of Kurukshetra from Dvaraka, He sent his uncle Akrura: “Just go to Hastinapura, New Delhi, and see what is the situation.” So Akrura understood that Dhrtarashtra was planning something. So he talked with him that “Why you are implicated in such planning? Krishna does not want it.” Dhrtarashtra knew that Krishna was the Supreme Personality of Godhead. So Dhrtarashtra said that “I know that what I am planning, that is not good. I know Krishna the Supreme Personality of Godhead. And He has requested me. But I tell you frankly, I cannot do without it. So when Krishna will be pleased upon me, I may be.”

So this is the position of the materialistic person. A materialistic person knows that he is sinful. A materialistic person knows that whatever he is doing is wrong, but he cannot check. Just like the thief. A thief knows that if he commits stealing, he will be arrested, he will be punished. He knows. Because he heard from law books, from other sources, and he has also seen that a thief is arrested and he is taken by the police for being punished. So we have got two kinds of experiences: by hearing and by seeing directly. In Bengali it is called, dekha-suna. The two kinds of experience: one by seeing, practically experiencing, hand to hand; another by hearing. So one who is intelligent, he gets his experience simply by hearing from the right source. That is nice.

So our process is that we are getting experience about the perfect knowledge, the destination of life, simply by hearing from Krishna, So we are the most intelligent person. It is not possible to experience directly, but if one has got intelligence, then simply by hearing and considering and thinking over it, he gets the experience. So those who are very sinful, they get experience by hearing and by direct, directly seeing also; still, they cannot check from sinful activities. So Dhrtarashtra, by his sinful activities he became so much fallen that he did not hear anybody’s advice, Vidura’s advice, Bhishma’s advice, that “Don’t plan like this. The Pandavas are the rightful owners. They are minor, but don’t try to cheat them.”

So the planning was complete and the war field was set up at dharma-ksetre kuru-kshetre. Dharma-kshetre means, kuru-kshetre, that place is a pilgrimage. People still go to observe religious ritualistic performances. And in the Vedas there is injunction, kuru-kshetre dharmam acaret: “If you want to perform some ritualistic ceremonies, religious, then go to Kurukshetra.” So Kurukshetra is a dharma-kshetra. It is a not fictitious thing, just like rascal commentators say, “Kurukshetra means this body.” It is not that. Try to understand Bhagavad-gita as it is. Kurukshetra, dharma-kshetre. It is a place of religion. And especially when Krishna was present there, it is already. Why this house? Before our occupation, why this house was an ordinary house? Now it is temple. It is dharma-ksetra. it is a religious place. Why? Because Krishna is there. Krishna is there. So either you take Kuruksetra, ordinary place. But because in the battlefield Krishna was there directing Arjuna. So it is already dharma-ksetre.

So formerly people were religiously trained up. So they could not speak lies in a dharma-ksetra. That is still the practice. Just like in the western world, the Christians go to the church, they admit, confession, “Yes, I have done it.” But that has become a formality. But actually, one should admit in religious place that “Yes, I have done this.” But that does not mean you admit and again do it. No. You admit once, then you are excused. But don’t do it again.

So here Dhrtarashtra says, samaveta yuyutsavah [Gita 1.1]. Mamakah. That means “my sons,” and pandava, “my brother Pandu’s sons.” Samaveta, “they assembled.” What is the purpose? The purpose is yuyutsavah. This word yuyutsu is still used in Japan. Perhaps you know, yuyutsa, fighting. So yuyutsu, those who are desirous of fighting. Now, both the parties were desiring to fight, and they assembled. Why he is asking question, kim akurvata: “What did they do”? Because he was little doubtful that “These boys, after being assembled in Dharma-ksetra kuru-kshetre, they might have changed their ideas. They might have settled up.” Actually, the sons of Dhrtarashtra might have admitted, “Yes, Pandavas, you are actually the owner. What is the use of unnecessarily fighting?” So he was very much anxious whether they had changed their decision. Therefore he is asking. Otherwise there was no question of asking, kim akurvata. Just like if you are given food, if I ask somebody that “Such and such gentleman was served with nice dishes. Then what did he do?” This is a foolish question. He would eat. That’s all. (laughter) Similarly, when it is already settled up that they were to fight, there was no such question as kim akurvata, “What did they do?” But he asked this question because he was doubtful whether they had changed their opinion.

Kim akurvata sanjaya [Bg. 1.11.] He was asking his secretary. He was blind man. He was always conducted by his secretary Sanjaya, a very faithful secretary. And he is explaining the Bhagavad-gita by experiencing, by television within the heart. That art is not yet developed. You have got television through machine, but there is another television you can see within your heart everything, what is going on outside. Sanjaya says that by the grace of Vyasadeva, he learned this televisioning, and he was sitting with his master within the room and he was actually seeing how the fighting is going on. And he was explaining. This is the basic principle of Bhagavad-gita, I mean, the basic platform. Thank you very much. Hare Krishna