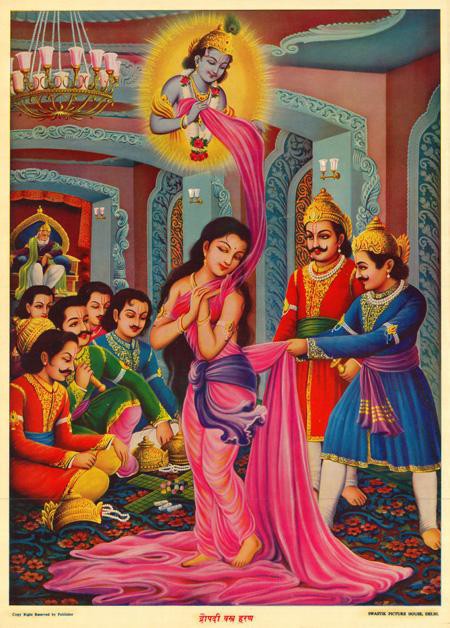 Bhaktivinoda Thakura’s instructions come to the aid of those of us who shudder at the mention of the word “surrender.”

Growing up, my older brother and I would sometimes get into physical fights. I can’t remember what we would fight about, but a few times a month when my parents weren’t home we would end up in a skirmish. He would often bend my arm behind my back, telling me to surrender by saying “uncle.” I would scream and push and stomp until the pain would become unbearable. Then I would yell, “Uncle! I surrender.” He would triumphantly release my arm, bragging about his victory. I remember feeling angry and vengeful. I even decided to stop biting my nails so I could use them as weapons to defend myself. I hated having to surrender to him.

So when I first heard Krishna’s words in the Bhagavad-gita telling me to give up everything and surrender to Him, I winced. That word surrender carried an emotional charge.

After getting past my initial negative response to the word, I wanted to know more about what Krishna means when he uses the word surrender, or in Sanskrit, sharanam. I learned that sharanam is often translated as “shelter.” So the surrender Krishna talks about differs from the surrender my brother demanded from me. Krishna’s call for surrender is His loving invitation to come under His complete shelter.

Although the Bhagavad-gita is apparently a private conversation between Krishna and Arjuna, Krishna intended that His teachings to Arjuna would be available to us. He is giving knowledge of Himself that will help us understand why, at the end of His talk, He can ask us to give up all other paths for progressing in human life and just surrender to Him. Anyone who has faith in all the things Krishna has said about Himself in the Bhagavad-gita will be convinced that He is worthy of our surrender and love.

In our Gaudiya tradition (the disciplic line descending from Sri Chaitanya Mahaprabhu), Bhaktivinoda Thakura has elaborated on the word sharanam. In his collection of songs titled Saranagati (“The Goal of Surrender”), he gives us a conceptual orientation of what pure surrender looks like and how we can practice to achieve the status of a sharanagata, a fully surrendered devotee. He describes the six practices of those serious about dedicating their lives to Krishna: accepting things favorable to devotional service, rejecting things unfavorable to devotional service, accepting that Krishna is our only maintainer, accepting that Krishna is our only protector, developing a deep sense of humility, and fully giving ourselves for the purpose of guru and Krishna.

In the beginning of our devotional life it is critical to learn to distinguish between what helps and what hurts our spiritual advancement. When I first became involved in devotional life, I brought many misconceptions about what was favorable for spiritual progress. Prior to meeting devotees, I would walk barefoot everywhere, considering this a spiritual practice. I was amazed to learn that devotees wore shoes outside and that, with the exception of walking in a holy place, going barefoot was discouraged. I also thought spiritual life meant to hardly eat or sleep. I had been trying to reduce both beyond what was healthy for my body. I quickly learned that spiritual life involves being balanced in our material needs-avoiding too much or too little.

Srila Prabhupada had translated a number of books by the time I joined his movement in 1976. Studying those books, especially The Nectar of Devotion and The Nectar of Instruction, along with the association of devotees, helped me understand what was favorable and what wasn’t. Once we have the foundational understanding, it is up to us to make choices that will help us advance. Prabhupada told us that sense gratification is like salt. We need a little, but not too much. Similarly, some renunciation and detachment can help us advance, especially in the beginning of our spiritual journey, but too much can harden our heart. It is important for people starting on the path of bhakti to have good guidance-devotees they can trust to help them make good choices based on their individual natures. What might be too much for one may be too little for another. Finding a more advanced devotee who understands our psychology is very helpful in our treading the path.

Krishna as Our Maintainer

Those who have imbibed the mood of surrender will see Krishna as their only maintainer. They won’t be anxious about their maintenance and will have complete confidence that Krishna will provide for all their needs. They do their part, but they know that ultimately the Lord is the source of their supply. This faith is a central piece of surrender, and those who have developed deep faith in this principle are released from much anxiety.

In the early stages of bhakti, we develop our faith in Krishna as our maintainer by reading stories about how He maintains His devotees. Many stories in the scriptures demonstrate Krishna’s commitment to provide for all of His devotee’s needs.

For example, when Narada Muni approached the hunter Mrigari, Narada asked him to give up his sinful habit of half killing animals and leaving them to die. He enlightened the hunter about karma, telling him how in his next life he would have to suffer a fate similar to that of the poor creatures he was torturing.

After the hunter had developed some faith in Narada Muni as his spiritual guide, Narada asked him to break his bow. Mrigari hesitated, wondering how he and his family would survive if he gave up his means of livelihood. Narada assured him that if he took to the devotional path, Krishna would provide for all his needs. The hunter complied with Narada’s request, breaking his bow and taking up the spiritual practice of chanting Krishna’s holy names.

Many of Mrigari’s neighbors became aware of his transformation and began to honor him as a saintly person. Every day they would bring food to him and his family. In fact, the quantity of food far exceeded his needs, and he had to ask that the amount be reduced.

Hearing such narrations helps us have faith in the principle of seeing Krishna as our maintainer. And that faith enables us to stretch ourselves in ways that help us see Krishna’s maintenance in action. In my own life, after I’d worked at a full-time job in a mental-health clinic for over ten years, my husband and I took a risk to create a life that would give us more time for our spiritual practices. We moved to a rural spiritual community, and I developed a private practice, mostly on the phone and the Internet. I feel that Krishna reciprocated with our desire; we have had enough means to live comfortably, with more time for our spiritual lives.

Krishna as Our Protector

The next principle of shsharanagati is to have full faith that Krishna will protect us in all situations. When I first became a devotee, I read Krishna: The Supreme Personality of Godhead, Srila Prabhupada’s summary study of the Tenth Canto of the Srimad-Bhagavatam. The book tells of Krishna’s life on earth fifty centuries ago. He spent His childhood in Vrindavana, an idyllic rural community surrounded by His loving devotees. What struck me most was the seemingly relentless stream of threatening situations that flowed into Vrindavana, a replica of His home in the spiritual world. Why would Krishna’s abode be fraught with danger? Because, I learned, each successive attack from a demon or misguided demigod increased the love and dependency the inhabitants of Vrindavana felt for Krishna.

Of course we don’t purposely put ourselves in harm’s way. We act intelligently, but if while living a life dedicated to making spiritual progress we confront a dangerous situation, we practice taking shelter of Krishna. Again, hearing narratives from scriptures about how Krishna protects His devotees and hearing of the experiences of contemporary devotees (such as Indradyumna Swami’s Diary of a Traveling Preacher), we develop faith in this principle. It is also important to understand that protection may not always mean protection for the body, but rather we, the soul, are always protected, and if Krishna desires that we leave our present circumstance, He will protect us, the soul, and we will never lose whatever spiritual attainment we have.

The next principle of surrender is humility. The mood of humility is critical for spiritual progress. Real surrender comes from realizing we can’t do anything without the mercy and help of the Lord. Humility allows us to let Krishna take the lead in our lives. It allows us to open our hearts to His instructions and to serve Him through His representatives in the material world.

Bhaktisiddhanta Sarasvati Thakura said that the beginning of humility is the absence of the enjoying mentality. Our spiritual nature is pleasure seeking, but when we look for enjoyment in matter, in things that don’t endure, we become takers, exploiters. To reinstate our spiritual consciousness, we need to practice giving and serving.

The last principle of sharanagati is to fully give ourselves-body, mind, and heart-to the Lord’s service. This means we no longer have any separate interest from Krishna’s. To practice this principle, we serve advanced Vaishnavas and share Krishna consciousness with others. We see where we are not giving of ourselves and what material attachments are holding us back. We strive to go forward, and hope to attract the attention of spiritual personalities who can help us progress.

Saranagati sets the stage for our loving sentiments to fully develop. Practicing these six principles encapsulates abhideya, or the way and means to attain love of Krishna. Krishna tells us in the Bhagavad-gita (4.11) that He reciprocates our efforts to surrender. What is that reciprocation? We become enlightened by knowledge of who we really are-an eternal spiritual being who has a loving relationship with Krishna and all of His associates. We also become joyful and experience a transcendent reality that becomes more and more relishable as we progress on the path.

I now have a different association with the word surrender, but I also find it is helpful to use other words, such as shelter or refuge, to help others who might also have had a big brother growing up.

The Cure For Fear

Response: Stephen Fry on God – The Meaning Of Life