Diksha Without Tapa: Initiation in Name Only 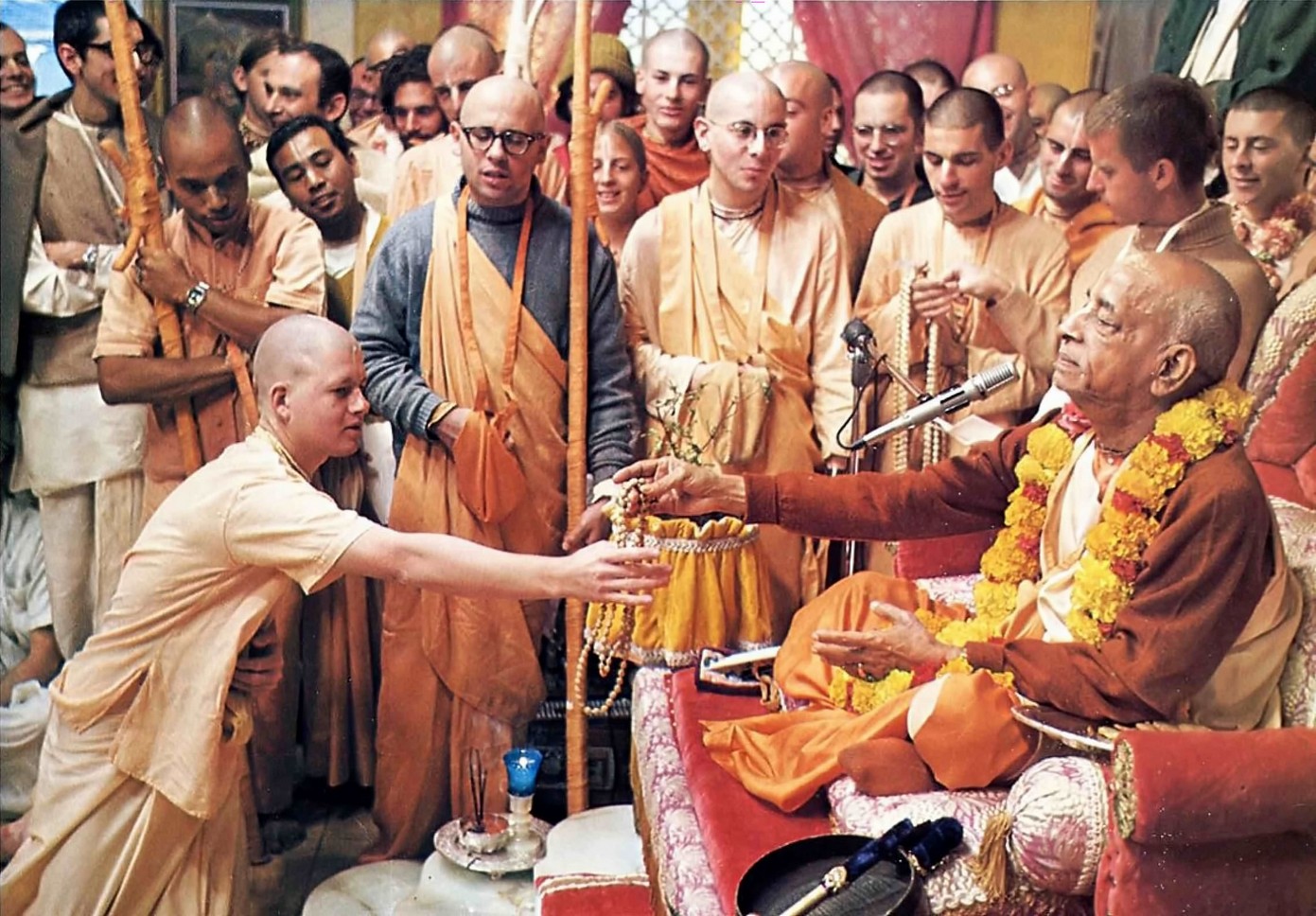 Voluntary restraint and the acceptance of discipline form essential parts of Vaishnava initiation.

Did you hear the story of the man who rode up to the gates of our Mayapur, West Bengal, temple to sell ice cream? He had one of those tricycles you see a lot in India—the ones with a refrigerated box on the back. Nothing sells quite like ice cream on a hot day. Only he wasn’t selling ice cream at all.

He opened the lid of the icebox, pulled out a hand bell and a bunch of papers, then began ringing the bell and calling out, “Diksha! Diksha!” [“Initiation! Initiation!”] He was selling diksha and, as it happens, was selling it very cheaply: “Diksha doh rupya!” or: “ Diksha, two rupees!” Although those trained in the Hare Krishna movement would not be interested in such “initiation,” some visitors to the temple did gather around, examined the papers, and handed their money over.

Such dikshas are commonplace in parts of India. For a fee, a certificate of initiation is given, like a title deed bestowing a certain spiritual status and religious-community identity rights. A person receives a blessing and becomes an adhikari, “one who has been awarded the right.” For a relatively modest investment of cash, you too can be a more qualified person than you were yesterday. What’s slightly more important is that you can tell others about your improved social status too. Your Diksha Certificate, signed in ink by the guru, can also get you in to certain places and is very handy when you want to go to particular parties or festivals.
England’s Landless Aristocracy

Over here in England, we have a long history of mankind’s basic urge to own such deeds of entitlement. One of the formative episodes in the history of our nation was the Norman Conquest. Although it’s hard for us to talk about any time when we’ve been beaten by the French, every English schoolchild knows the date of A.D. 1066, when the northern French invaded Britain, defeated King Harold in the Battle of Hastings, and never really went home.

The victorious William the Conqueror commissioned the Domesday Book, a record of every village and field in the land. He then proceeded to apportion those villages and huge tracts of land to all his friends, bestowing upon them ranks and titles according to their respective landholdings. Thus the English aristocracy was born, with all its lords, earls, dukes, barons, and viscounts. Even today, nearly a millennium later, a mere two hundred English families still own half of the land in Britain.

Yet over the centuries, many of the smaller aristocrats sold off their lands, holding on to only their hereditary title. Still later, even the titles were sold, bestowing upon the purchaser the distinction of a powerful traditional name, but with no factual wealth or power.

Thus today, for a mere £2500, you can become known officially as Baron Such-and-Such, baron of three villages—but without owning the villages. You’ll receive an attractive, elaborately handwritten declaration scribed on vellum, sometimes dating back 300–400 years. You’ll have the legal right, under British law, to have others refer to you by your new name and to sign yourself as such on all official documents.

Yet as for the land ownership that the title originally conferred on its owner, you’ll see none of that. No serfs will doff their caps as you ride your white horse into “your” village. You won’t get any tithes of the harvest either. Indeed, you won’t have any power over anybody or anything, except the power to look up from your sofa and gaze at your nicely framed certificate proclaiming you a member of the English aristocracy.
Diksha for Sale

Why am I giving you this English history lesson? Because just as powerless peerages are being sold on the Internet, conferring nothing on their owner but a new name and smug satisfaction, so diksha is now being sold for a few pounds—or sometimes nothing at all—conferring only the notion of spiritual or religious attainment. The tricycles have come West.

Diksha is the process of being enlightened with transcendental knowledge and committing oneself to the spiritual path under the guidance of an authentic teacher. It is not something that can be purchased out of cold-box on the back of a tricycle. Its real price is commitment, demonstrated not only by an intellectual adjustment to one’s belief system, but by some form of voluntary restraint and the acceptance of discipline as essential parts of the effort required for inner growth. As in all areas of life: no pain, no gain. Such personal austerity, or tapa, is said to be the factual spending power of spiritually progressive people. Tapa is “the wealth of the brahmanas.”

When Brahma, the original created being within the universe, was perplexed as to his origin and true identity, he tried by his own efforts to discover the truth. It was only after he heard the divine syllables ta-pa echoing from beyond the universe that he was able to comprehend that he should engage in meditation.

In classical Vaishnavism, the guru does not award diksha unless the prospective disciple has demonstrated some personal tapa. Rising early, bathing, eating frugally from a diet regulated by vegetables, fruit, and grains, chanting the Lord’s holy names according to a numerical vow (in ISKCON that is sixteen times around 108 beads), engaging in menial service for the guru, abandoning sinful acts (such as intoxication, illicit sex, gambling, and eating of meat, fish, or eggs), and placing oneself at the beck and call of the spiritual master—all these are prerequisites for diksha.

Without tapa, actual diksha cannot take place. Even if the external formularies are conducted and titles awarded, no substantial inner transformation actually happens.

The book Pancha Samskara, written in 1885 by Srila Bhaktivinoda Thakura, explains the five essential components of Vaishnava initiation and answers the question why, after such initiation, some Vaishnavas are seen not to make progress:

The answer is that Vaishnava samskara is the best, but at the present time it is practiced in name only. Both the spiritual teacher and the student block their own spiritual advancement by being content with only the external aspects of samskara. Today, the deeper significance of samskara is not understood. When the student submits himself to the teacher, the teacher gives pancha-samskara and then abandons him. What good can come from pancha-samskara of this type? Externally the student looks good, but internally there is nothing.

The tongue utters the name of Hari … but the student is addicted to endless sinful practices. At night, he takes intoxicants and practices debauchery! O good teacher, how have you benefited your student? What is the difference in him before and after diksha? In fact, he is worse. He is a hypocrite. There is no remorse: “I am sinful. It is my fault. How can my sin be given up?” These days no one thinks like this when taking shelter of a spiritual teacher. Sinful activities are performed without the slightest concern. What misfortune!

Why is this? Because the wrong kind of relationship exists between teacher and student. The shastras [scriptures] give rules to guide this relationship, but they are not followed. The student who is burning in the fire of material life, who analyses his predicament and concludes, “My relationship with material nature is not permanent; therefore I must take shelter of a spiritual teacher to obtain the feet of God,” has reached the stage of faith and is qualified to take shelter of a spiritual teacher. The teacher should study the student for one year and observe his atonement. This is called tapa—the faithful soul’s first samskara.

The word tapa is translated as “repentance, atonement, and the permanent impression of higher sentiment on the soul.” Tapa applies not only to the body, but also to the mind and the soul. If it is only physical, in the form of branding or stamping [the custom of marking the upper body with the symbols of Vishnu], then tapa has not actually taken place and religious practice becomes hypocritical. At the present time this kind of hypocrisy has weakened Vaishnava culture. Without tapa, or inner repentance, the soul cannot live as a Vaishnava. Without tapa the whole process becomes useless. Without tapa the heart remains impure. Therefore, good friends, seek atonement without delay!

Such a seemingly alarmist judgment on the bad practices of Vaishnava diksha of the 1880s was intended to be a strong criticism of the gurus of Bhaktivinoda Thakura’s day. Yet it also stands as a permanent caution to any future would-be disciple collectors. Why such stern warnings from an otherwise compassionate and gentle Vaishnava? Because the tendency of many would-be prophets, philosophers, and messiahs—at least those directly desiring to be socially known as such—is to gather as many devoted followers as possible. And because the tendency of many of those would-be disciples is to achieve that status with as little pain and commitment as possible.

These tendencies create the strong possibility that insincere gurus and uncommitted followers will find each other, a situation that has repeated itself down through the centuries. And the result is always that true and authentic diksha becomes obscured by popular misconceptions.
Westward Migration

For many centuries both the genuine Vedic system of diksha and its pale shadow were restricted to India. Since the 1950s, however, swamis, yogis, and gurus have been coming to the Western countries and offering various kinds of diksha. Finding their Western followers somewhat averse to tapa, they have trimmed their requirements to appeal to their audience.

For many years the Gaudiya Vaishnavas, devotees of Krishna in the line of Sri Chaitanya Mahaprabhu, were free from this practice. Represented by ISKCON through the personal vigilance of its founder-acarya, His Divine Grace A.C. Bhaktivedanta Swami Prabhupada, the Western Vaishnavas were held to the standard of tapa as prescribed in scripture. In recent years, however, there has been a marked increase in the level of diksha, with diminishing levels of requirements. As Gaudiya Vaishnava preachers attempt to emulate Srila Prabhupada and his successes, they have begun to give “initiations” while leaving aside the traditional requirements of personal tapa, mutual scrutiny of guru-disciple, and the normal levels of affectionate guardianship offered by the guru to the disciple after diksha.

The result is a large increase in the number of those now holding spiritual names with the suffix Dasa and Dasi. Unfortunately, like those barons and dukes with their framed certificates, those who have bought their tapa-less diksha may find that all that has changed is their name.

Our African Brothers And Sisters (Album of photos)
"The Pizza Effect"

1 Comment to “ Diksha Without Tapa: Initiation in Name Only”