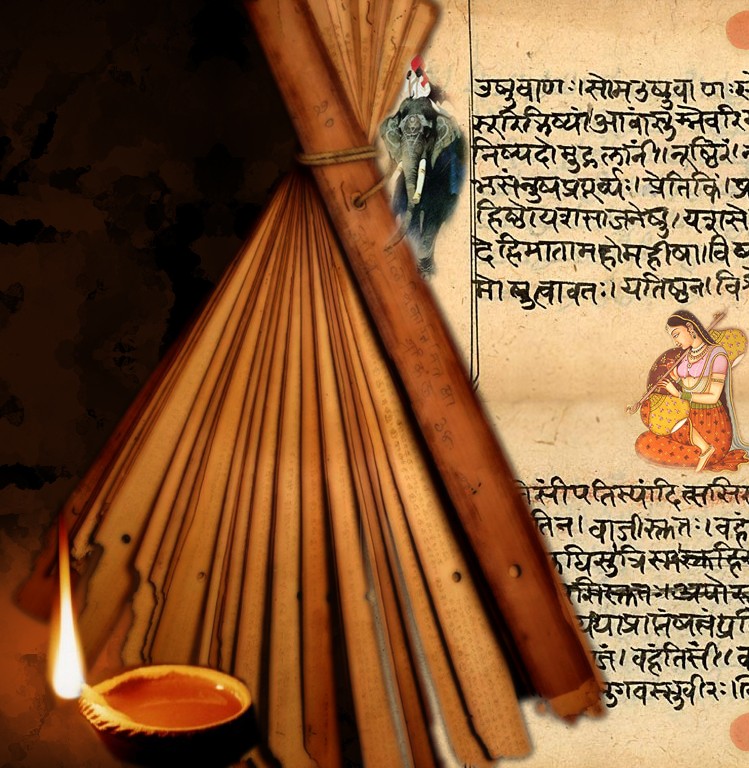 One of my friends said, “Look at the rich technical vocabulary of English. Isn’t it amazing that today we have so many new words created in English like Computer, Processor, Monitor, Internet, Hardware, Software etc that it is almost impossible to create words with similar meaning in other languages and so instead we will have to directly import these english words into our languages to keep pace with the rapidly evolving new terms.”

And then I explained to him the Sanskrit source of various English words and he was quite surprised – not because he didn’t know it all these days, but because he had failed to recognize the obvious phonetic connection that existed between words in his Indian language (which is again derived from Sanskrit) and similar sounding words with similar meaning in English!

So I thought I better pen down a list of all such English words derived indirectly from the ancient Sanskrit.

But before that, as usual a small preface :)

The World’s Oldest Known Literary work – the Vedas – the root source of the Indian and Hindu Philosophy and Spirituality – are written in Sanskrit.

“The Sanskrit language, whatever be its antiquity, is of wonderful structure; more perfect than the Greek, more copious than the Latin, and more exquisitely refined than either, yet bearing to both of them a stronger affinity, both in the roots of verbs and in the forms of grammar, than could not possibly have been produced by accident; so strong indeed, that no philologer could examine them all three, without believing them to have sprung from some common source which, perhaps, no longer exists; there is a similar reason, though not quite so forcible, for supposing that both the Gothick and the Celtick, though blended with a very different idiom, had the same origin with the Sanskrit; and the old Persian might be added to the same family”

Well, the irony is that till today there is no literature in the world about the so called PIE. There is no inscription found anywhere in the world written in the so called PIE. Nobody knows how the PIE was. Nobody knows who spoke it or in which part of the world was it spoken. No known ancient culture in the world talks about such a language being the root of the language they spoke. Simply put there is NO PROOF about the existence of this language. Just look at its name. It was a name GIVEN to it. A language if spoken will definitely contain words referring to everything that the people who spoke it could identify, yet here is a language which doesnt even have a name referring to itself!

So then what is the basis of having introduced this language in the language tree in the first place – a language which will remain invisible forever? Might be a guess, Max Muller used to guess a lot like this about the vedas, which he then retreated later.

Be it Greek Latin English Hindi Lithuanian – Sanskrit is the mother of all Languages. Even Scholars like Voltaire, Immanuel Kant etc believed that Sanskrit was the root of all Indo-European languages.

“I am convinced that everything has come down to us from the banks of the Ganges” said Voltaire. He believed that the “Dynasty of Brahmins taught the rest of the world”.

“Mankind together with all science must have originated on the roof of the world ie the Himalayas” declared Immanuel Kant.

About PIE – No idea, they are all linguistic experts who created this language, Oops, I mean its existence – for the language itself is not known yet. I am not an expert to speak on PIE, might be those who speak about it are experts in this language :)

All I do is present below a list of English words which are derived from Latin/Greek/Persian which are in turn derived from Sanskrit. Indians will be quick enough to recognize these words in their own language since most Indian languages have also originated from Sanskrit and even the other languages have a great deal of Sanskrit influence on them.

And here goes the list of English words derived from Sanskrit.

NOTE: Just to make it clear the below list does not contain Sanskrit words that have been directly borrowed into English in recent times like Karma, Avatar, Mantra, Guru, Cheetah, Pundit, Juggernaut, Nirvana, Lakh etc but lists only those English words which were derived from Sanskrit as English evolved by borrowing words from Greek/Latin etc.
Mainstream English words with Sanskrit Roots

Where Is My Higher Guru?

Happiness Platform with Bhakti Charu Swami on The Leadership Show