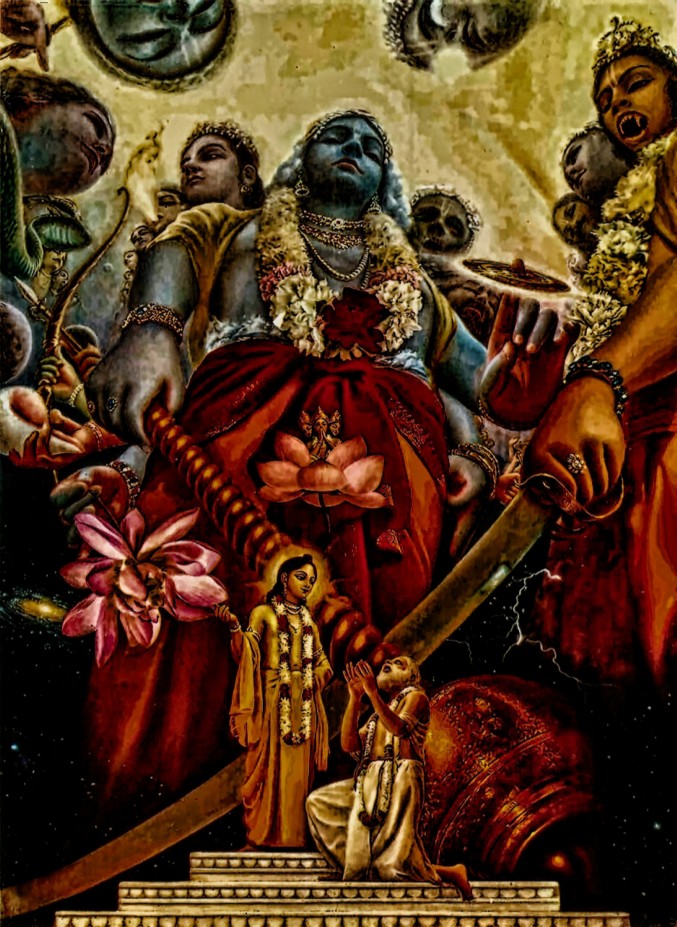 But they would not lead to Vishnu. They lead to the different deities. They would install some temporary deities, some dolls. And then after some days of puja, they would through them in the river. So they did not worship the eternal Lord. They were into this temporary worship. Their goal was to earn money, have a good house, have nice children, be agitated, and all material sense gratification. They did not think anything beyond this.

This was the situation then. The devotees were going to Advaita saying, “What to do?” “My name is Advaita. It means non different. So if there is any meaning to my name, I will bring down the Supreme Personality of Godhead Krishna. He is the only one who can save the infidels. If I cannot bring Him down, I will manifest four arms and I’ll chop these people down. I will chop them down! Finished!”

Vishvarupa, the expansion of Sankarsana came. In the month of Magha, Jagannath Mishra had a dream that there was a white light that came into his mind, went into his heart and transferred to the heart of Sacimata. In this way she was expecting. They did not have any physical connection as such. It was all done transcendentally. The Supreme Personality of Godhead was situated in her womb.

Then Lord Caitanya played games on these devotees from the heavenly planets. Although they were invisible to the human beings, he would make their shadows visible to Sacimata. She started seeing shadows going around in her room. She started chanting Narasimha mantras.

The devas went and hid. They said, “How could she see us?” Then they figured out that it was the Supreme Personality of Godhead

So the Gaura Purnima 529 years ago. At that time there was a lunar eclipse. A lunar eclipse is normally considered inauspicious. It was the system in an eclipse that all of the people would go waist deep into the Ganges, and being in the Ganges, they would chant

When Lord Caitanya came into this world, he did not need the moon. He is the source of millions of moons. The whole city was chanting the holy names. That was the situation when Lord Caitanya appeared.

Jagannath Mishra was so happy. He had a big feast and gave out whatever was possible to the brahmanas and to the people. While his wife was pregnant, she started to become very effulgent, brilliant. People would just come up to him and hand him money. Although he was a poor brahmana, somehow Laxmi was coming to his house because of the coming of Lord Caitanya. Laxmi also wanted to serve Lord Caitanya.

Like this, the whole world was chanting. Spontaneously, Advaita Acharya and Haridas Thakura started dancing.

I tell these details every year. We are doing the Lord Caitanya book, Sri Krishna Caitanya, like the Krsna Book. So we take from six or seven or eight books, which ever has a particular lila, and combine that and give the entire lila. On this appearance day, every book gives more or less something. But each writer doesn’t want to offend any other writer. They don’t write anything that is in the other book. They just give a very slight mention. You do not get the whole past time unless you read all of the books. That’s not very practical for most people. We are trying to combine all of those books to make a comprehensive Caitanya Lila book in simple, less lengthy purports, just like Krsna book, more or less.

A few weeks ago we did the disappearance of Jagannath Mishra. It may not be completely keeping, but it shows how everything that the Lord did was transcendental, how his pastimes were like live dramas, and how he connects the different things that go on.

He was only nine years old. He had taken his brahmana thread, his upanayanam. His brother left home as a sannyasi. He was allowed to go to school. One day, his father came home after studying in his own guru’s ashram. He came home, and he suddenly got a very high fever. In those days, there was not so much medical recourse.

His fever was so high that Sacimata became apprehensive. She started to cry. Lord Caitanya said, “Why are you crying for him? My dear mother, everyone in this world has to die. The Himalayan Mountains, the oceans, Indra, Varuna, Agnideva, everyone leaves at some point. There is no reason to lament, even if he leaves. But you should call his friends and relatives to sit around him and chant the Hare Krishna mantra. What else are friends for but at times like this, to chant.”

She went out and quickly got the friends and relatives. They went around Jagannath Mishra and they were chanting. A couple of the elders and some of the wives, they could see that he was very serious and decided to take him by the side of the Ganges.

Then Visvambara grabbed his father’s feet, also. He said, “If you go, who will I call Daddy in my house? Who will take me affectionately with his hand to study and to take prasadam?” Jagannath Mishra told his son, “I have to tell you this. Without telling you, it’s not right. I prayed to Lord Ramacandra to take care of you. You’ll be under His protection.”

He did not have any idea who his son is. He was absorbed in the parental relationship. “So I prayed,” he said, “to Raghupati Rama to protect you. So you will have no problem. You will be under His protection.”

They picked His father up and they put him waist deep in the Ganges. Around him, all of the men began chanting.

And Jagannath Mishra was also chanting. Now, if he wanted, he could go directly back to the spiritual world. But he went through this death lila just to teach others. He chanted the holy names and left his body. A celestial airplane came down, took him, and brought him up to the spiritual world to Goloka Vrindavan.

They took his lifeless body. At that time, Visvambara was crying. From His lotus eyes, tears came out like pearls, like gajamanis, special big sized black and white pearls. They formed a necklace around His chest. Everyone was chanting the holy names. They put his body on the funeral pyre and performed the last rites.

Nimai told His mother, “There is nothing to worry about. I will be with you.” He did the fire yajna for the father and gave out prasadam to everyone.

It is said that anyone who hears this pastime, their heart becomes freed from all suffering and they become awakened to the wonderful nature of Lord Caitanya. Of all the different pastimes of Lord Caitanya, the ones which are apparently heavy, or the ones in which they are rejoicing that He came into this world, are all filled with transcendental bliss. We realize how wonderful it is to be in Lord Caitanya’s movement.

Lord Caitanya has predicted that He would send His devotee after five hundred years to preach the message of the holy names in those countries to which he did not go. Because of that, we have the great mercy to be under the shelter of Srila Prabhupada.

Speech at the Oriental University, Indore
With a powerful chopper of Nama Sankirtana, I will cut the knots of demoniac desires from the hearts of everyone

Instructions to the Mind