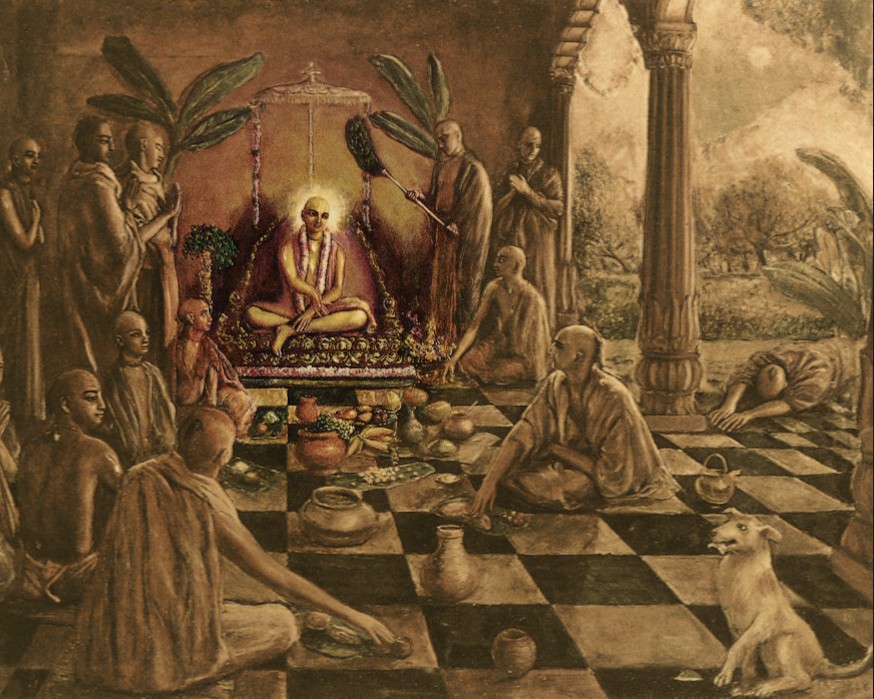 “When we love those who love the Lord, the Lord reveals his love to us. Krishna sends his loving devotees to this world, so that we can transfer our attachment.”- Radhanath Swami

Shivananda Sen, he was taking all the 200-300 devotees from Bengal to Puri. They were walking so many days. And a little dog just started following. And that dog… he wasn’t a kind of pedigree, beautiful kind of dog. He was just the kind of dogs that you find in the streets of India. He followed. He followed. And Shivananda Sen just saw with such compassion – “If this spirit soul in this dog, if he sees Lord Chaitanya, how much he will benefit! I must serve him nicely.”
So, the dog became dear to Shivananda Sen. The dog didn’t do any seva. All he did is just follow, and whatever else dogs do. And when Shivananda Sen was delayed and he had to give dog a special meal. So, he made some special rice, only for the dog. But while he was gone, they forgot to give him that special rice.
So, he came back, “Where is dog?”
“We don’t know”
“Did you feed him his special rice?”
They said, “We forgot”.
Shivananda Sen was looking everywhere, couldn’t find him. When he finally came with all the party to Puri, he went to see Sri Chaitanya Mahaprabhu. Shivananda Sen was alone. He went to the Gambira and he saw two people all alone, Sri Chaitanya Mahaprabhu and the dog. How did he get there? It’s a mystery! It was just the two of them. Lord Chaitanya had some green coconut pulp.
And he said to the dog, “Chant Krishna! Krishna!”
And the dog chanted, “Krishna! Krishna!”
Sri Chaitanya Mahaprabhu took a bite of the green coconut pulp, and took it out of his mouth, and threw it at the dog. And the dog jumped up and had it.
Then Mahaprabhu said, “Chant Krishna! Krishna!”
The dog went, “Krishna! Krishna! ”
It kept doing like that. They were having a pastime together.
Shivananda Sen, it describes, he bowed down to the lotus-like paws of the dog. That was how he honored that dog. And we read in the Sri Chaitanya Charitamrita, the next day dog was nowhere to be found. Sri Chaitanya Mahaprabhu sent him to Goloka Vrindavan, the spiritual world. What was his qualification? This dog, he wasn’t doing any intense sadhana. He wasn’t doing any puja. He was attached to a devotee.

So, one may say, “If he was attached to the atma, then why was he feeding the body of the dog? Why was he so concerned with proper meals, proper transportation? He had to pay for him to go on boats.” Because the body is the medium by which we could serve the atma. But what is the intent? A mother and father have to care for their children, have to care for the physical [health] of their children. But is the motivation to liberate their souls? “By serving this person’s body I can actually somehow or other give Krishna to their soul.” And if that’s what will really do, then the body is the medium. Yes, Shivananda Sen was very concerned with the body of the dog. But his purpose was to bring him to Lord Chaitanya, so he could get that mercy. And somehow or other, because of that kindness, the dog became attached to him.
– Radhanath Swami

Remedy for Coronavirus
The Glories of Brahmacarya