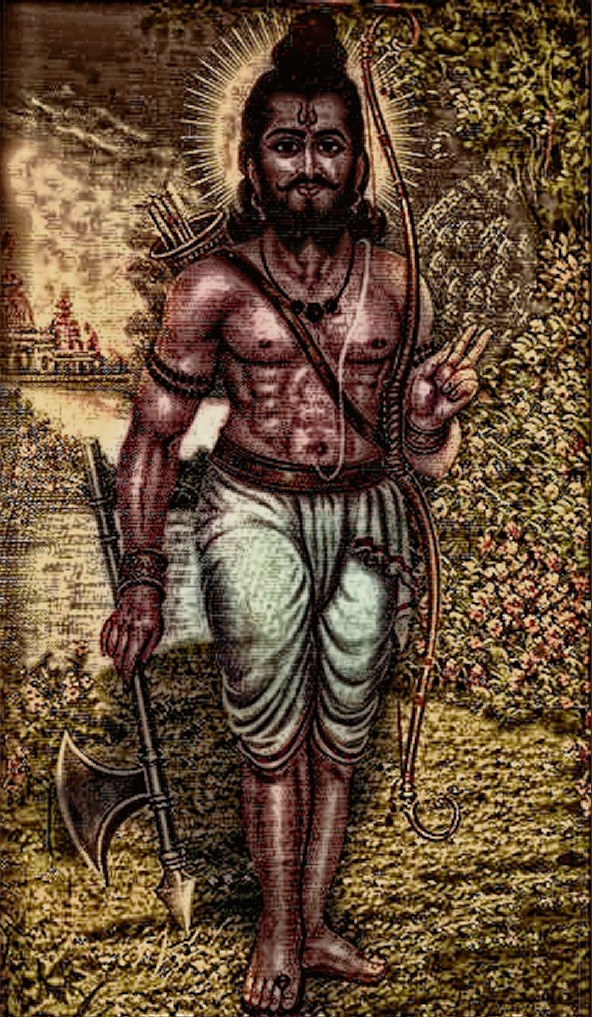 In a former age, God’s empowered incarnation employed extreme measures to deal with an extreme situation.

Sectarian and political disputes are common not only today but occurred even during the time of Sri Parashurama, an empowered incarnation of the Supreme Lord who appeared several ages before Lord Ramachandra, millions of years ago. The kings at that time, proud of their strength and fighting for absolute power, revolted against the spiritually advanced sages, who generally guided government. Since these kings had offended the devotees of Lord Krishna and deviated from the path of righteousness and care of the citizens, they had to be punished. Sri Parashurama fulfilled that mission. Though born in the family of learned brahmanas, he developed a keen interest in archery because he knew he would battle the vile warriors who opposed the saintly authorities.

How was Lord Parashurama incited to kill the kings?

Once, tired while hunting in the forest, a king visited the hermitage of Parashurama’s father. Despite the royalty’s hostility toward brahmanas, the sage cordially received and fed the king and his attendants. The king was awestruck at the heavenly reception, which he discovered was possible because the sage owned a wish-fulfilling cow (kamadhenu) that could produce anything. The jealous king commanded the sage to surrender the cow to him. But, knowing that the king would exploit the cow, the sage did not comply. The king’s soldiers captured the cow, however, and dragged her away.

The massacre displeased Parashurama’s father, who advocated forgiveness. Parashurama, however, preferred to fight to establish justice.

Which of the two is to be followed by the Krishna conscious-to tolerate like Lord Jesus Christ or to fight like Arjuna? According to Vedic principles, when personally insulted a devotee does not retaliate. But if someone offends God, the scriptures, the sages, women, cows, or old or weak persons, then the devotee must defend them and subdue the offender as an act of justice.

To protect the cow, Parashurama had done no wrong in fighting the wicked warriors. Still, since he had killed a king-the representative of God and protector of the people-his father instructed him to atone by visiting holy sites, which are the abodes of pure saints and pastime places of the Lord. To exemplify proper behavior, Parashurama followed his father’s command. From his story we learn that violence is to be avoided as much as possible, but is sometimes necessary to uphold justice.

Taking advantage of Parashurama’s absence, the princes avenged their father’s death by beheading Parashurama’s father, brutally disregarding the desperate appeals of the sage’s wife. How could such a great sage, father of God’s incarnation, be murdered? This was a karmic reaction to an offense the sage had committed. Once, Parashurama’s mother went to the river to fetch water. Upon reaching the river, she was attracted to a handsome prince sporting in the water with women and desired his company. Dazed, she lost all sense of time and forgot that her husband was awaiting her return for his fire sacrifice. When she eventually arrived, her husband was furious to learn of her adulterous thoughts and ordered his sons to kill their mother.

The sons weren’t sure what to do. In Vedic culture, murdering any woman (what to speak of one’s own mother) is a horrible sin. On the other hand, disobeying an elder’s command (especially the father’s) is also a great offense. When the sage’s confused elder sons declined to obey his command, the sage instructed his youngest son, Parashurama, to kill his disloyal mother and disobedient brothers.

Pleased with Parashurama’s obedience, the sage offered to fulfill any desire of his. Parashurama asked his father to give life back to his dead mother and brothers and to free them from any memory of the trauma. Realizing his needless rage, the sage brought back to life his beheaded wife and sons, who then stood up as if just waking from deep sleep.

As a karmic reaction to the sage’s killing of his wife and sons, the princes killed him.

The pastimes of the Lord and His devotees and incarnations are transcendental affairs that we cannot imitate. Still, the story of Sri Parashurama’s family teaches us to be wary of lust and anger, which can disrupt the lives of even such great souls as Parashurama’s parents.

Upon hearing his mother crying out to him when the princes attacked his father, Parashurama rushed back to the hermitage. But before he arrived, the princes escaped with the sage’s head. Leaving his father’s body with his sad brothers, Lord Parashurama resolved to end the reign of irreligious kings.

He started his mission at the king’s capital, where he reduced all his opponents and their armies to severed limbs and heads afloat in a river of blood. On seeing this, some of the frightened kings fled the Indian subcontinent. The bloodbath filled huge lakes at Kurukshetra, the site where the Mahabharata battle would take place. The twelfth-century Vaishnava poet Jayadeva writes: “O Keshava! O Lord of the universe! O Lord Hari, who have assumed the form of Bhrigupati [Parashurama]! All glories to You! At Kurukshetra You bathe the earth in the rivers of blood from the bodies of the demoniac kshatriyas [warriors] that You have slain. The sins of the world are washed away by You, and because of You people are relieved from the blazing fire of material existence.”

His mission complete, Lord Parashurama prayed to Lord Krishna to elevate his father to heaven and retired to the mountains to perform penance.

Why did Lord Parashurama kill so many people? Isn’t it better to establish peace than to wage war? The massacre must have left many families unprotected, children orphaned, towns devastated, and communities disrupted. As Arjuna asks in the first chapter of the Bhagavad-gita, how can any good come from war?

Parashurama’s extermination of the warriors seems to destroy peace and harmony. His war, however, was a just revolution against injustice. It was necessary to establish true peace, which had been disrupted by the aggressive leaders. To fulfill His promise to protect His devotees, Lord Krishna as Parashurama destroyed the corrupt leaders, who were harassing the saints. The devotees of the Lord are the bearers of peace and prosperity because they constantly serve the all-auspicious Lord Krishna, husband of the goddess of fortune. Since government leaders were neglecting religious principles and torturing innocent citizens, their hostile reign had to end at any cost.

Could Parashurama have avoided the war through nonviolent protest? Here’s what Prabhupada writes about a similar situation: “Lord Krishna and Arjuna, the Lord’s eternal friend, had no need to fight in the Battle of Kurukshetra, but they fought to teach people in general that violence is also necessary in a situation where good arguments fail. Before the Battle of Kurukshetra, every effort was made to avoid the war, even by the Supreme Personality of Godhead, but the other party was determined to fight. So for such a right cause, there is a necessity for fighting.” (Bhagavad-gita 3.20, Purport) During the time of Lord Parashurama, nonviolence was out of the question because the warriors would not listen to any advice, continuing their aggression unchecked.

Perhaps if the sages had silently tolerated the torture, compassion would have arisen in the aggressors and they would have stopped their atrocities. But in their envy, the aggressive leaders had relentlessly harassed the sages for generations. The sages had been forgiving the kings’ misdemeanors, until the situation got out of hand.

When God or one of His incarnations kills opponents in battle, they are liberated from material existence. That’s the difference between Lord Krishna and us. Also, if we kill someone, sin touches us, but if Lord Krishna kills someone, He remains ever pure. He never acts with selfish motives. He says in the Bhagavad-gita (4.14): “There is no work that affects Me; nor do I aspire for the fruits of action.” The Lord is transcendental, and those who understand His pure nature remain unaffected by acts in the material world, just as lotuses in a pond remain untainted by even a drop of the muddy water.

Every action by Lord Krishna is absolute. Whether He kills or protects, He does so out of compassion. The devotional come to the Lord to offer flowers of worship, and the irreverent come to attack Him with weapons. The Lord reciprocates according to their motives. He reciprocates with death for His self-professed enemies and with love for His devotees. Krishna’s killing is compassionate because He liberates His opponents. Both the devotee and the miscreant are spirit souls, eternal parts of Lord Krishna. When the Lord kills His opponents, His touch purifies them and they merge into His existence.

Whether during Lord Parashurama’s time or at present, whenever the wicked and dishonest corrupt society, the Supreme Lord Himself incarnates or sends an empowered representative to curb the offenders, protect the virtuous, and establish the true principles of dharma. Just as Lord Parashurama was an archer empowered by Lord Krishna to defeat all unruly leaders, in our times, His Divine Grace A.C. Bhaktivedanta Swami Prabhupada is the representative of the Lord empowered to defy all atheistic philosophies. Just as Lord Parashurama is present today as he performs penance atop sacred mountains, Prabhupada lives with us today in the form of his divine teachings.

One Response to “Lord Parashurama’s Revolution”