When Science Points to Spirituality 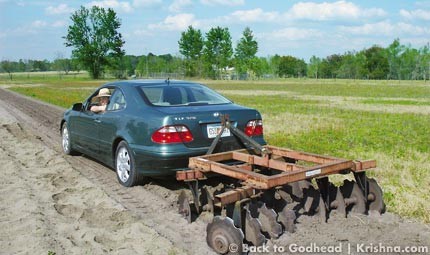 Modern research is confirming the Vedic viewpoint that human life is meant for more than the pursuit of material pleasure.

Imagine a farmer who gets a Mercedes Benz as a gift. The only vehicle he has ever seen is a tractor, and the only purpose he knows for any vehicle is plowing. So he hitches a yoke to his new Mercedes and starts driving it over his field. Of course, not only does his attempt at plowing fail; his new car malfunctions. He becomes totally frustrated—with himself, his car, and his field.

Ridiculous, we might say, that somebody would use a Mercedes to plow. But could this be the story of our life? The Vedic scriptures—and the scriptures of all the great religions of the world—say that human life is meant for achieving, not material enjoyment, but spiritual fulfillment. The Vedic scriptures further explain that the human body is a precious vehicle that the soul gets after transmigrating through 8.4 million species. In all subhuman bodies, the soul has access only to material pleasure, through fulfilling the bodily demands of eating, sleeping, mating, and defending. All material pleasure is troublesome to acquire. Even when acquired, it is unsatisfying because of the body’s limited capacity to enjoy. And even this paltry pleasure is inevitably curtailed by disease and old age, and terminated by death.

Only in the human body is the soul’s consciousness evolved enough to access a superior source of pleasure—love of God. The Vedic scriptures explain that love of God enables the soul to attain eternal happiness in the spiritual world, his original home. Achieving this love of God is the specific and exclusive purpose for which the soul should use the human body.

Because we see almost everyone around us pursuing material goals—sex, wealth, luxuries, prestige, power, fame—we assume such pursuits to be the natural purpose of life. But, as the saying goes, “Do not think you’re on the right road just because it’s well-worn.”

When we use a Mercedes to plow, three things result: a spoiled field, a wrecked car, and a frustrated driver. Analogously, let’s see what science has discovered about using the human body only for sensual pleasure. Specifically, what happens to the environment (the field), the human body (the car), and ourselves (the driver)?

The environment: Biologist E. O. Wilson, among many other scientists, has studied the complex interdependence among various species in the biosphere. He found that every species makes some contribution to the ecology of the planet. For example, if vegetation decreases, herbivores suffer, then carnivores. But he found that one species doesn’t contribute to the ecology—the human species. If the human species became extinct, there would hardly be any problems for any other species or for the ecology. In fact, human extinction would solve most ecological problems. The human species is arguably the most intelligent species on the planet. Normally the more intelligent the student, the more positive his contribution. Then why is it that, among all species, our human contribution to the ecology is not the most positive, but the most negative? Can it be that our contribution is meant to be at a level higher than the physical?

The human body: How do activities many consider enjoyable affect the human body? Smoking causes lung disease, drinking leads to liver diseases, eating non-vegetarian and junk food ruins digestion, and illicit sex—that perpetually over-hyped carnal pleasure—brings AIDS, an epidemic for which there is no aid. Modern society, education, and media indoctrinate us into believing that material enjoyment is the goal of life. But this “enjoyment” causes our worst suffering. Could it be that we are being tragically misled into abusing the human body for activities it is not designed for?

Ourselves: And what about the effect on ourselves? Scientists are still groping in the dark about who or what the self is. But one thing is for sure: the more modern society neglects or rejects spiritual growth, the more trouble the self gets into. This is evident from our spiraling mental health problems. The World Health Organization (WHO) has declared that mental diseases—stress, depression, addiction, psychosomatic problems—will be the greatest health hazard of the current century. Worse still, WHO statistics show that over one million people commit suicide every year. That’s more than the total annual deaths from wars and crimes combined. And this figure is only the reported number of suicides.

Mental disease and suicide have many causes. But the common origin is frustration in achieving one’s goals, whatever they may be. When this frustration rises to an acute and hopeless degree, one feels one’s very existence to be an agony. And the ending of one’s existence appears to be the only solution. Why is it that we modern humans, the most “intelligent” among all species, are the only species whose members commit suicide in such alarmingly high numbers? WHO calls suicide as “a tragic social health problem” and states that there is no proven cure for it. Could it be that the goals society sets for us are incompatible with our selves and invite the frustration that leads to mental health problems and ultimately suicide?

How does channeling human energy for spiritual elevation affect ecology, human health, and the self? Lets see what science says.

Ecology: Most environmental problems have arisen from the materialism and consumerism that has accompanied the decline of spirituality and its inherent self-restraint. Therefore the following quote from Alan Durning of the World Watch Institute represents what many scientists consider to be the only hope for saving the environment: “In a fragile biosphere, the ultimate fate of humanity may depend on whether we can cultivate a deeper sense of self-restraint, founded on a widespread ethic of limiting consumption and finding non-material enrichment.” All forms of non-material enrichment—prayer, meditation, yoga, chanting the holy names—clearly point to a spiritual dimension to life. And this spiritual dimension is most comprehensively explained in the Vedic scriptures. In fact, the Vedanta-sutra begins with a clarion call: athato brahma jijnasa, “Now therefore [now that you have a human body], devote yourself to spiritual enquiry.” (Vedanta-sutra 1.1)

Human health: The current epidemic of indulgence-born diseases shows that universal scriptural injunctions for self-restraint—sobriety (no intoxication) and continence (no illicit sex), for example—are sound health advice too. Herbert Benson of the Harvard Medical School, citing extensive research on the physical and mental benefits of spiritual living, states that the human body and mind are “wired for God.” Not only that, a survey published in Reader’s Digest (January 2001) stated that believers in God live an average of eleven years more than nonbelievers.

The self: And what about the self? Science has come up with a precious finding: spirituality is a sure solace for the self. Survey after survey has shown that spiritual practices protect people from self-destructive behavior and habits. Patrick Glynn of George Washington University writes in his book God: The Evidence that surveys show that those who don’t attend spiritual prayer meetings are four times more prone to suicide than those who do so. Further, the giving up of such meetings has been found to be the best predictor of suicide, better even than unemployment. These findings indicate that spirituality provides inner joy, which frees people from the uncontrollable and insatiable craving for external pleasures that leads to addictions and suicides. Such findings have inspired some modern thinkers to echo the Vedic conclusion that spirituality is not just a part of our life; it is the essence of our life. Stephen Covey, well-known author of the Seven Habits series, aptly remarks, “We are not human beings on a spiritual journey. We are spiritual beings on a human journey.”

What Are We Waiting For?

Science is clearly showing that human life spent for material enjoyment is ecologically, physically, and spiritually disharmonious and disastrous. Science is also strongly indicating that when we strive for spiritual happiness, we benefit our planet and our body too. The Vedic scriptures offer us a balanced program of material regulation and spiritual growth for achieving the highest potential of human life. Bhagavad-gita (6.17) states that regulation in eating, sleeping, work, and recreation, coupled with spiritual practices, paves the way to freedom from all material miseries. The most potent and practical spiritual practice for the modern age is the chanting of the Hare Krishna maha-mantra. By chanting we can achieve a state of happiness that will fully satisfy us, and we will never be disturbed by any material upheaval. (Bhagavad-gita 6.22)

It’s time to stop using the Mercedes for plowing. It’s time to put our human vehicle into gear by chanting Hare Krishna. Then we can speed along the highway of devotional service, back to our long-lost home with Krishna.

The Divinity of Sri Caitanya