Sankirtana: Welfare for All Beings 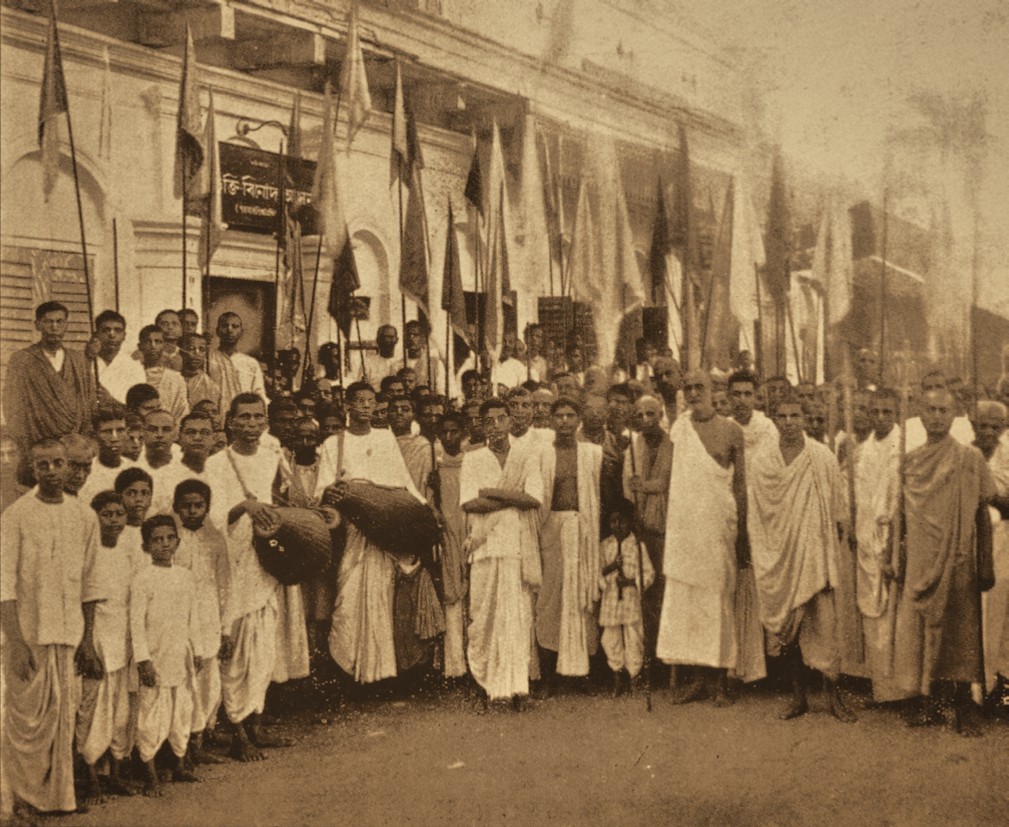 “Is chanting all that your religion does? Don’t you do welfare or anything like that?”

Alex, my barber, works at the Pilatos salon in Queens, New York, on the cusp of a Hispanic neighborhood. The salon has mostly Latino hairdressers and clients, and it is bright and upbeat, with salsa music often playing softly in the background. On a recent visit there, instead of salsa, I heard the chanting of om namo bhagavate vasudevaya, which means “obeisance to the Supreme Lord Krishna.” I remarked to Alex that this is one of the Hare Krishna chants. He and I sometimes chat about Krishna consciousness, so he became quite interested. It seems the CD was a European compilation of various exotic chants and prayers from around the world and Alex was the one who had brought it to the salon.

He asked me about chanting. I explained that the basis of the Hare Krishna religion is sankirtana, or glorification of the Lord in everything one does. One kind of sankirtana is chanting the Lord’s holy names.

Alex had seen groups of people chanting on the streets, and he asked, “Is chanting all that your religion does? Don’t you do welfare or anything like that?”

“We do welfare work,” I responded, “but it’s welfare for the soul.”

Welfare for the Soul

I told him that the chanting itself is the greatest welfare, because it invokes the presence of the Lord in the form of His name. When we chant in public, everyone who hears is benefited by association with the Lord. Thus, sankirtana is welfare. Alex, who is Catholic and from Costa Rica, said that some of the nuns he knew in school recited the rosary almost all day. He wondered whether that was like our sankirtana.

“Yes,” I replied, “it is similar to sankirtana. And Prabhupada once told me that the Muslims’ chanting of Allah’s name is also like sankirtana.”

Alex said that he didn’t want to offend me, but he had noticed that many people who see the Hare Krishna chanting groups don’t understand what we’re doing.

He asked, “How is that welfare, if they don’t understand?”

I explained that the effect of the chanting doesn’t depend on our understanding. I used the example of a medicine we take to cure a disease. We swallow the pills, but we don’t need to know how they act. After some time, the medicine takes effect, and the disease goes away. Similarly, the chanting acts to cure the soul of its disease, which is bondage to maya.

Alex recalled that we had spoken of maya in our last conversation.

“Yes,” I said, “maya is illusion, and it keeps us focused on this world, clouding our ability to connect with Krishna.”

He liked my explanation of the mysterious effect of chanting, but he still thought it impractical to chant among people who had no idea that their maya was being cured.

“In fact,” I replied, “we do tell people about maya and Krishna. Our welfare work includes disseminating Krishna’s teachings and glories. And, yes, you’re right(when people understand Krishna, they receive a greater benefit from sankirtana welfare.”

I added that book distribution is our most effective means of informing people of the significance of sankirtana.

He asked, “Do you sell your books in the subway, like the Scientologists and Jehovah’s Witnesses?”

I explained that we have a number of books.

“One is called the Gita, which has Krishna’s teachings, and another is the Bhagavatam, which is a set of books containing Krishna’s glories. And we distribute them widely, sometimes even in the subway.”

Emboldened by my candor, Alex expressed concern that a religion where everyone simply chanted all the time didn’t seem practical.

“Well,” I said, “some of our saints were examples of constant chanting, but Prabhupada advised me not to follow that example. He asked me to chant about one and a half to two hours a day as a disciple’s duty, but he said that for the remaining hours of the day working for Krishna is as good as chanting. He cautioned that lazy might people chant to avoid such work. Because I was a family man, Prabhupada encouraged me to have an honest profession and use my efforts and money for sankirtana.”

Alex was wary when I mentioned money. He said that the Catholic priests he knows are always asking for money and he didn’t much like that. I explained that Chaitanya had prescribed a kind of formula for sankirtana welfare that addresses his concern.

“Chaitanya urged everyone to do sankirtana welfare by offering their words, intelligence, wealth, and life. He taught that the basis for sankirtana welfare is the offering of words, including public chanting or the distribution of the printed word. Intelligence is also used for welfare by organizing the festive chanting and book distribution. For example, every year here in New York we have a grand procession down Fifth Avenue called Rathayatra that has large, colorful carts adorned with flags and tall canopies. Many Hare Krishna people apply their intelligence to obtain permits for the festival, organize displays, prepare food, and coordinate cleanup.”

In the mirror I could see Alex’s face light up. He stopped trimming my hair and told me that he had walked in the Rathayatra parade in June 2002, just months after the attack on the World Trade Center. He commented that the devastation from the attack had depressed him, and he felt that the parade had nourished his soul. It had reminded him of Catholic processions in Costa Rica.

Still, he asked, “What about the money you mentioned? Who gets the money?”

I replied, “The important point is that giving money is based on the offering of words and intelligence, so we are supposed to use our intelligence when we give and not depend on others to dictate or intercede. We give our money for the chanting festivals and book distribution. We also use it to maintain temples, which are centers for sankirtana welfare. Prabhupada taught that we should see to it that our offerings to sankirtana are not misused. Part of the mission of the organization he founded—the International Society for Krishna Consciousness—is to govern the proper use of contributions. It is especially important to offer money, because Krishna’s Gita teaches that such an offering is part of a yoga called karma-yoga.”

When I mentioned yoga, Alex told me that he does a little yoga at home and sometimes goes to classes. I explained that karma-yoga is different from exercise yoga.

“Karma-yoga is the offering of one’s efforts and money to Krishna as a way to connect with Him. Krishna taught that using money selfishly is the cause of worldly bondage, but sacrificing it for welfare frees one from maya. Also, Krishna taught that karma-yoga is an essential part of the highest and most powerful yoga, which is bhakti-yoga, or devotional service to Krishna. Bhakti-yoga is the highest yoga because it awakens love for Krishna.”

My haircut had been finished for a few minutes, and Alex had another client waiting. I reminded him that everything is based on the chanting. He asked whether I could write down the words to the prayer on the CD, so I wrote om namo bhagavate vasudevaya. Underneath the prayer, I wrote: Hare Krishna, Hare Krishna, Krishna Krishna, Hare Hare/ Hare Rama, Hare Rama, Rama Rama, Hare Hare.

I told him, “The prayer on the CD has the power of Krishna’s name, and chanting it will benefit you. However, Prabhupada taught his followers to chant Hare Krishna because it is especially recommended for this age. I find chanting Hare Krishna to be wonderful.”

Alex asked his next client to go for a hair wash, and I went to the cashier to pay for the cut. I came back to give him a tip and said that next time I would bring him Krishna’s Gita. That way, he could learn how to offer his intelligence as well as his chanting. At that point he joked that he was a long way from the money part. I laughed.

“That’s no problem,” I said. “Krishna says you can begin by offering Him even a leaf.”

As I prepared to leave, Alex asked me how much money I give to sankirtana. I replied that Prabhupada had asked me to give fifty percent of what I earn, so that is what I try to give. He was surprised and said that it seemed to be quite a lot.

“I’ll tell you frankly, Alex,” I replied, “I was deeply grateful for Prabhupada’s affection and training, so I felt that it was the least I could do. Moreover, Chaitanya likened sankirtana welfare to distributing fruit that cures old age and death. I was enchanted by that analogy and have definitely experienced the benefits of giving and seeing others benefited.”