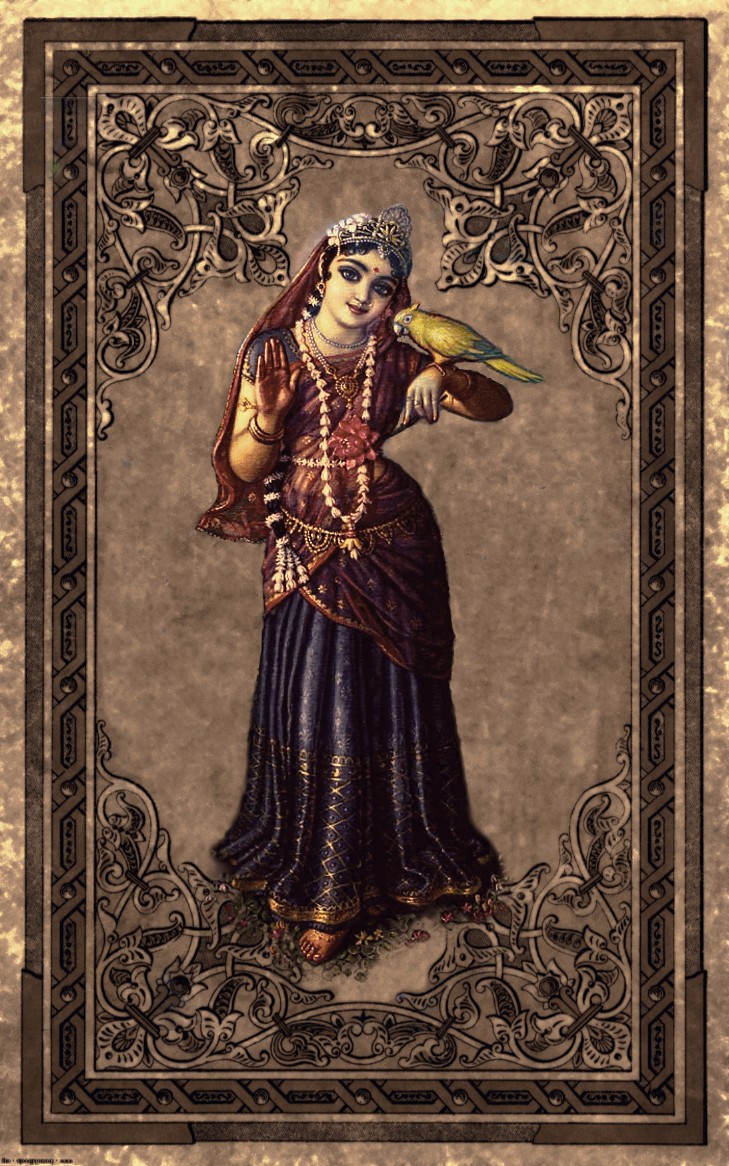 The luxurious growth of one of Krishna’s greatest devotees, who appears in a special form, attests to the devotion of two of her dedicated caretakers. 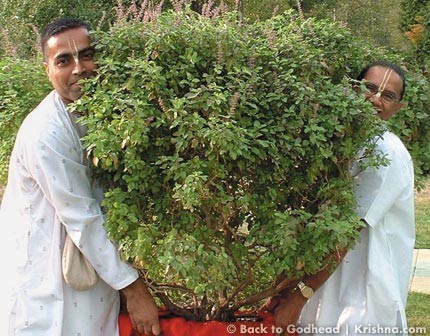 Rudrani Devi Dasi, one of Tulasi’s caretakers at ISKCON Vancouver, responds to this challenge.

“Tulasi is not an ordinary plant,” she says. “Just consider even her scientific Latin name—Ocimum sanctum. Ocimum means she is related to the herb basil, and sanctum means ‘holy.’ She is known as Holy Basil and is recognized as uniquely auspicious in all the Vedic scriptures, by all the saints in our tradition, and by our spiritual master, Srila Prabhupada.”

Rudrani’s husband, Sananda Kumara Dasa, who also takes care of Tulasi, says, “A skeptic may think, ‘God is fictitious. God’s service is another sentiment. Do something practical, ’ but a person who has some faith will not be satisfied by such so-called logic. God, Krishna, is more than a force, light, or energy. He is a person, the Supreme Person, who is the source of all force and light and energy and is also an individual. Krishna has his favorite place: Vrindavana. And his favorite animal: the cow. And he also has his favorite plant: Tulasi. Honoring Tulasi can give us the highest attainment: devotion to Lord Krishna. In India all Hindus, even those not belonging to the Vaishnava group, take special care of the Tulasi tree, and every day the devotees in our Hare Krishna movement pray to Tulasi, ‘Please give me the privilege of devotional service. ’”

In a purport in his earliest edition of Bhagavad-gita As It Is, Srila Prabhupada wrote, “Krishna desires that one offer Him either a leaf, or a flower, or fruit, or a little water—and by such an offering he is satisfied. This leaf especially refers to the Tulasi. So one can sow Tulasi and pour water on the plant.” Two years later, in the spring of 1970, Prabhupada was delighted to introduce the worship of Tulasi in his ISKCON center in Hawaii, and today Tulasi is worshiped in almost all of the hundreds of ISKCON centers throughout the world.

In 2002 the Tulasi plants in Vancouver, which were housed in a small, well-worn greenhouse, had a crisis: Each Tulasi plant lost every one of its leaves because of a misapplication of plant medicine. As soon as Rudrani, who was not active in Tulasi’s service at that time, heard about this, she took steps to help, and seeing her determination, Sananda also became active. Sananda had grown up in South India, where his family was responsible for providing Tulasi leaves, as well as fresh milk and flowers, to the local temple of Lord Vishnu. He had experience with growing Tulasi, but only outdoors in a tropical climate. Growing them indoors was quite different. Rudrani, who had cared for Tulasi in other North American ISKCON temples, knew how to grow her inside. Gradually this determined couple drew other qualified devotees to Tulasi’s service.

After dozens of phone calls, Rudrani found a suitable greenhouse model for Tulasi, and she and Sananda persuaded the temple board to spend $20,000 (Canadian) for two greenhouses with special grow lights, complete air ventilation, and controlled air and water temperatures. When all these electrical systems are running they consume thirty kilowatts per hour. Tulasi’s Vancouver caretakers spend hours each day to water her, pick her leaves (Krishna prefers that food offered to him be decorated with a leaf from Tulasi), make manjari (Tulasi flower) garlands for Sri Madana Mohana (the deity of Krishna worshiped in the Vancouver temple), humidify the greenhouses, and control the spider mites that occasionally attack her. As a result of their expertise and devotion, the Tulasi plants are flourishing and have grown so large that the greenhouses are now crowded.

By coincidence, the year that Rudrani and Sananda became active in Tulasi’s service—2002—was the same year I planted a Tulasi seed from a bag of seeds a friend had given me. Those seeds, my friend said, were special because they were from Tulasi plants in Vrinda Kunda, Tulasi’s sacred grove in Vrindavana, India. When that one seed didn’t grow, I planted two more from the same bag, and when they didn’t grow, I planted twelve more. This time six of them grew. When five of those plants were strong enough, I gave them away to neighbors and kept the sixth one until the fall. As I wasn ’t prepared to protect her from the winter drafts, dry air, and darkness of our Saranagati winter (Saranagati Village is a four and a half hour drive from Vancouver), Rudrani and Sananda kindly agreed to take in my ten-inch Tulasi for the season. When she came back in the spring, I could hardly recognize her—she had grown more than a foot in every direction. I cared for her that summer and sent her back the next fall. Now she’s too big to fit in a car seat. When I want to see her, I have to go to Vancouver. Some of my neighbors say that she couldn’t have grown so much in such a short time and that someone confused my small Tulasi with some larger one. But in fact the small miracle I experienced with that Tulasi also happened to almost all the Tulasi plants at the Vancouver temple.

Srila Jiva Gosvami, arguably one of the greatest spiritual scholars in the history of religion, said that one does not really accept God unless one accepts his inconceivable nature. In other words, if we try to limit God in some way, then in effect we have eliminated his true nature. In the same way, how the Lord’s internal potency for performing pastimes in this world expands as the pure devotee Tulasi, an eternal consort of Krishna, is also inconceivable. Devotees simply accept her and worship her with joy in their hearts. And if she blesses them by growing luxuriously, as she has in Vancouver, that, Srila Prabhupada wrote, is evidence of their sincere devotion.

Two verses in the Skanda Purana praise the Tulasi tree: “Let me offer my respectful obeisances unto the Tulasi tree, which can immediately vanquish volumes of sinful activities. Simply by seeing or touching this tree one can become relieved from all distresses and diseases. Simply by offering obeisances to and pouring water on the Tulasi tree, one can become freed from the fear of being sent to the court of Yamaraja [the king of death, who punishes the sinful]. If someone sows a Tulasi tree somewhere, certainly he becomes devoted to Lord Krishna. And when the Tulasi leaves are offered in devotion at the lotus feet of Krishna, there is the full development of love of Godhead. ”

And: “Tulasi is auspicious in all respects. Simply by seeing, simply by touching, simply by remembering, simply by praying to, simply by bowing before, simply by hearing about, or simply by sowing this tree, there is always auspiciousness. Anyone who comes in touch with the Tulasi tree in the above-mentioned ways lives eternally in the Vaikuntha world.”

Who am I? Nobody!
New York: ISKCON President's interview (4 min. video)