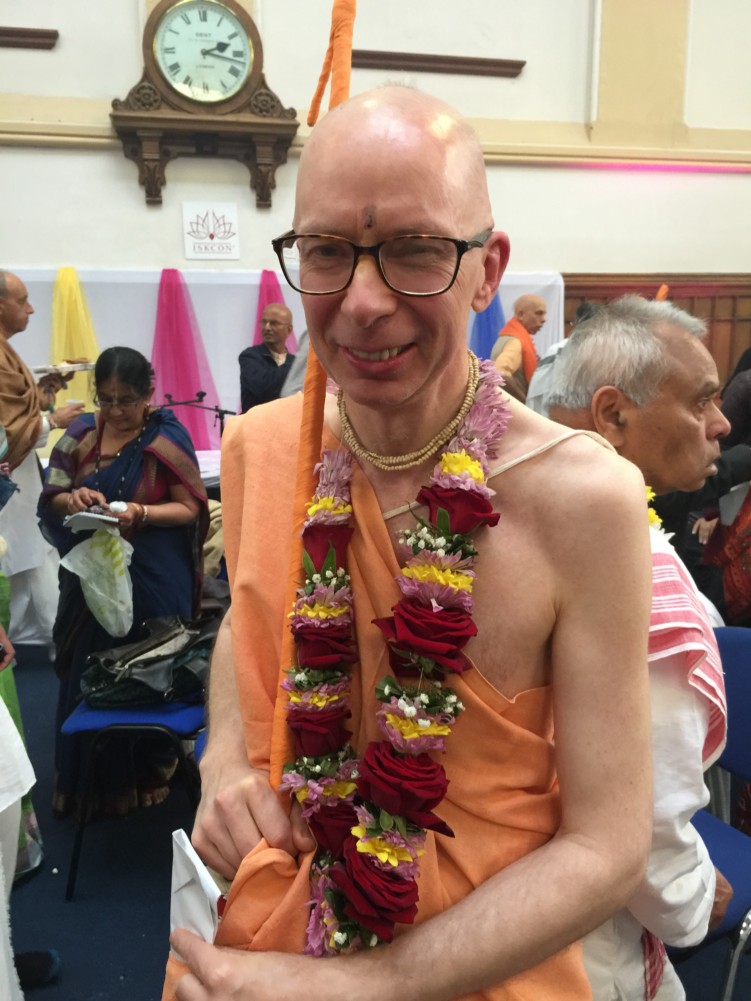 The ceremony took place at ISKCON Leicester, and the event was presided over by Sri Sri Jagannath, Baladeva and Subhadra, Sri Sri Panca Tattva and Srila Prabhupada. Senior devotees and leaders from around the country also attended the initiation.

Ten devotees from around the UK and Europe also received first initiation from HH Bhakti Charu Swami, with five others receiving Brahmin diksha.

This was the first ISKCON sannyasa initiation in the Midlands.

Bhakti Prabhava Swami (Lilasukha Dasa) met the devotees in Ghent (Flanders) in1992. From 1992 to 1996 he was active in Nama Hatta preaching until 1996 when he joined the Radhadesh temple. In 1994 he met His Holiness Bhakti Charu Swami who accepted him as his disciple. He received first initiation on the in March 1998 and second initiation in August 1999. Right after his second initiation he became the first secretary for the European RGB. He organised the first European Leaders Meetings (ELM) and went on several missions for the European RGB.

From 1996 to 2007 he was engaged in management of the Radhadesh projects, mainly taking care of supervising the administration, tax defense and legal matters. He also served as legal director, trustee, teacher and student in the Bhaktivedanta College. In May 2004 he opened an ISKCON centre in Brussels, and ind March 2006 he received a Global Excellence Award for ÒActing in the Interest of ISKCONÓ.

Lilasuka Das graduated from the MIHE Bhakti Sastri course in June 2001, and followed the Bhaktivaibhava course (2001-2004) at the VIHE in Vrindavana where he graduated in 2004. From 2005 to 2011 he continued with the VIHE Bhaktivedanta study and graduated for Bhaktivedanta in 2011.

From 2004 to 2007 he served as Bhaktivaibhava and Bhakti Sastri teacher at the Bhaktivedanta College in Radhadesh. Since 1998 he has been mainly preaching in European countries including the presentations of various seminars on the Srimad Bhagavatam.

From July 2007 on he has been fully engaged in preaching mainly in His main preaching zones are Belgium, France, Germany, Northern Ireland and England. Since 2001 he has been assisting His Holiness Prahladananda Maharaja in preaching in the Balkan States every summer. Since 2011, his home base is Leicester (UK) where he has been developing systematic education. Recently, in 2014, he became the lead instructor of the bhakti-sastri centre of ISKCON Leicester.

Lilasuka Das has also an BA in Theology, and MA in the study of Religion – Indian Religions and is presently finishing a PhD in the study of religion at the University of Wales

Prabhupada Festival 2015 in Los Angeles: A transcendental experience!
Out of the Woman Comes the Man, Spends the Rest of His Life Getting Back When he Can