The Most Intelligent Woman 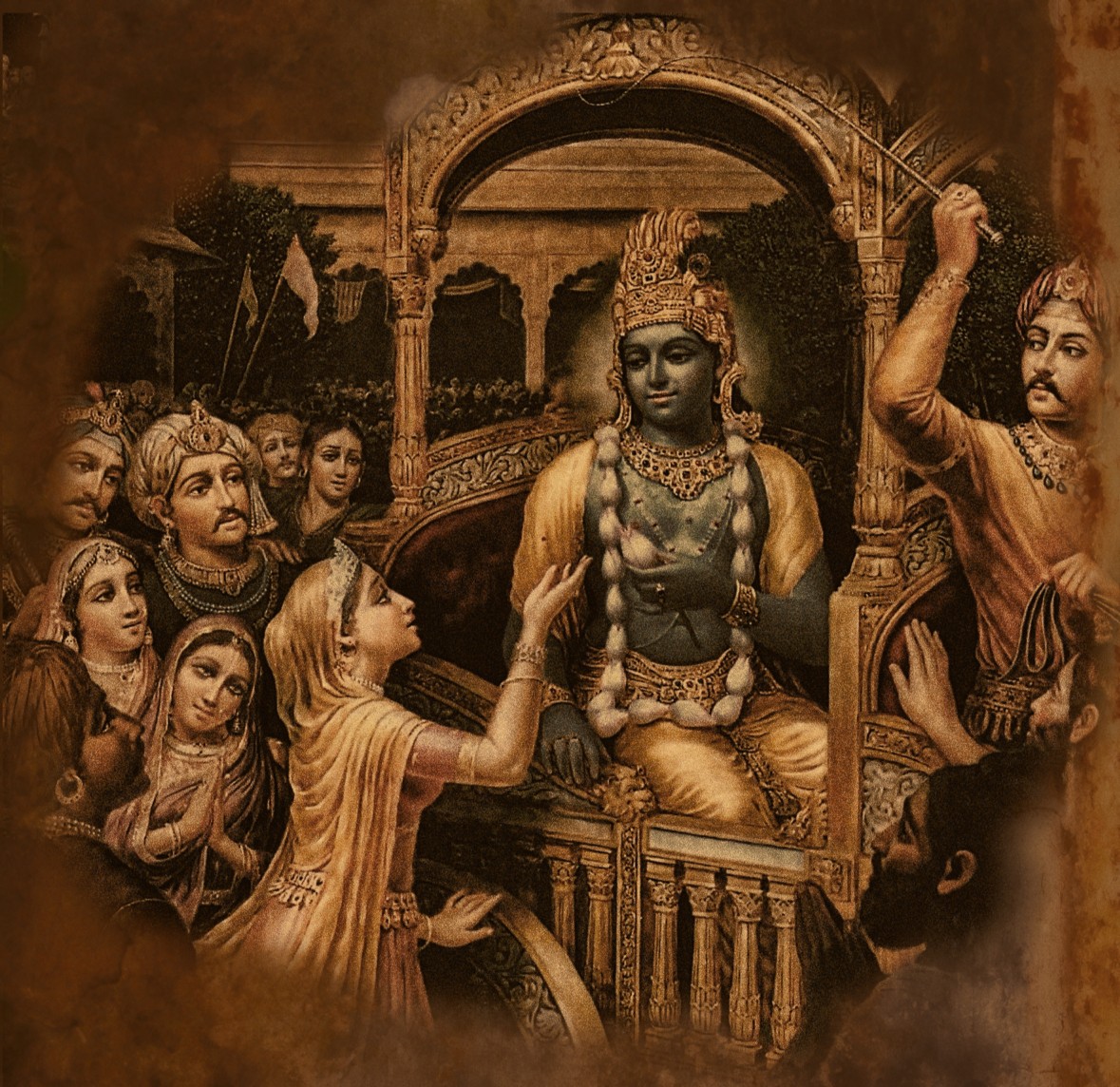 You Yourself descend to propagate the transcendental science of devotional service unto the hearts of the advanced transcendentalists and mental speculators, who are puriﬁed by being able to discriminate between matter and spirit. How, then, can we women know You perfectly?

Even the greatest philosophical speculators cannot have access to the region of the Lord. It is said in the Upanisads that the Supreme Truth, the Absolute Personality of Godhead, is beyond the range of the thinking power of the greatest philosopher. He is unknowable by great learning or by the greatest brain. He is knowable only by one who has His mercy. Others may go on thinking about Him for years together, yet He is unknowable. This very fact is corroborated by the Queen, who is playing the part of an innocent woman. Women in general are unable to speculate like philosophers, but they are blessed by the Lord because they believe at once in the superiority and almightiness of the Lord, and thus they offer obeisances without reservation. The Lord is so kind that He does not show special favor only to one who is a great philosopher. He knows the sincerity of purpose. For this reason only, women generally assemble in great number in any sort of religious function. In every country and in every sect of religion it appears that the women are more interested than the men. This simplicity of acceptance of the Lord’s authority is more effective than showy insincere religious fervor.

Kuntidevi prayed to the Lord very submissively, and this is the symptom of a Vaisnava. The Lord, Krsna, had come to Kuntidevi to offer respect to her by taking the dust of her feet. Because Krsna considered Kuntidevi His aunt, He used to touch her feet. But although Kuntidevi, a great devotee, was in such an exalted position, practically on the level of Yasodamayi, Krsna’s mother, she was so submissive that she prayed, “Krsna, You are meant to be understood by the paramahamsas, the most advanced transcendentalists, but I am a woman, so how can I see You?”

According to the Vedic system, there are four social divisions (catur-varnyam maya srstam). The highest members of the social order are the brahmanas, those who are intelligent, and then come the ksatriyas (military men and administrators), the vaisyas (farmers and businessmen), and ﬁnally the sudras (ordinary laborers). One’s place in this system is determined by one’s qualities and work (guna-karma). The Bhagavad-gita mentions striyo vaisyas tatha sudrah, and the Srimad-Bhagavatam speaks of stri-sudra-dvija-bandhunam. According to these references women, sudras, and dvija-bandhus are considered to belong to the same category. The word dvija-bandhu refers to one who is born in an exalted brahmana or ksatriya family but who has no qualiﬁcations of his own. One’s social standing, according to the Vedic system, is determined by one’s qualiﬁcations. This is very practical. Suppose a man is born the son of a high-court judge. This does not mean that he himself is also a high-court judge. Yet because one happens to take birth in a brahmana family, even if he has no qualiﬁcations and is rascal number one, he claims to be a brahmana, and although his qualiﬁcations are less than those of a sudra, people accept him as a brahmana. This has caused the downfall of the Vedic civilization. The brahmanas in India are sometimes very much against my movement because I train and accept brahmanas from Europe and America. But we do not care about their arguments, nor will any other reasonable man. Sri Caitanya Mahaprabhu said:

“In every town, city, and village of the world, the Krsna consciousness movement will be preached.”

How is it, then, that Europeans and Americans will not become brahmanas? In fact, one who comes to Krsna consciousness has already surpassed brahmanism. As stated in Bhagavad-gita (14.26):

The stereotyped, crippled idea that only a person born in a brahmana family can become a brahmana has killed Vedic civilization, but now we are reviving the correct understanding that the attainment of perfection is meant for everyone. In Bhagavad-gita (9.32) Lord Krsna says:

“O son of Prtha, those who take shelter in Me – though they be lowborn, women, vaisyas, or sudras – can approach the supreme destination.” Thus although women, sudras, and vaisyas are ordinarily considered to belong to a lower class, when one becomes a devotee he or she goes beyond such designations. Women, sudras, and vaisyas are ordinarily regarded as less intelligent, but if one takes to Krsna consciousness one is the most intelligent, as stated in the Caitanya-caritamrta (krsna yei bhaje sei bada catura). And Caitanya Mahaprabhu says:

Although Kunti had the body of a woman, she was a devotee. Therefore she was not like an ordinary unintelligent woman. Rather, she was the most intelligent, for she recognized Krsna to be the Supreme Godhead: “He has come to me to offer me respect, materially appearing to be my nephew, but He is the Supreme Personality of Godhead.” Therefore in a previous verse she said, alaksyam sarva-bhutanam antar bahir avasthitam: “You are not seen by ordinary men, although You are everywhere, inside and outside.” In another verse also she said, na laksyase mudha-drsa: “Fools and rascals cannot see You.” This indicates that Kunti saw Him. Unless she were able to see Krsna as He is, how could she say, na laksyase mudha-drsa? She also said, prakrteh param: “You are transcendental to this material creation.”

Now here also, in this verse, Kunti continues to express herself with humility. This humility is very good in devotional service. Therefore Sri Krsna Caitanya Mahaprabhu teaches us, trnad api sunicena taror api sahisnuna: “One should be more tolerant than the tree and humbler than the grass to make progress in spiritual life.” This is necessary because for one who is living in this material world there will be so many disturbances, just as if one were traveling on the ocean. One cannot expect a very peaceful situation on the ocean; even a big ship may also be unsteady, and at any moment there may be tumultuous waves. Similarly, in this material world we should always expect danger; one cannot expect a very peaceful life within this material world. The sastra, the Vedic literature, says, padam padam yad vipadam (Bhagavatam 10.14.58): at every step there is danger. But if one becomes a devotee, then one can escape (mayam etam taranti te).

If one takes to Krsna consciousness, in the beginning there will be many disturbances caused by Maya, the material energy of illusion. Maya will test us to see how ﬁrmly we are ﬁxed in Krsna consciousness. Because she is also an agent of Krsna, she does not allow anyone the freedom to disturb Krsna. Therefore she tests very rigidly to see whether we have taken to Krsna consciousness to disturb Krsna or are actually serious. That is Maya’s business. So in the beginning there will be tests by Maya, and we shall feel so many disturbances while making progress in Krsna consciousness. But if we follow the rules and regulations and chant regularly as prescribed, then we shall remain steady. If we neglect these principles, Maya will capture us immediately. Maya is always ready. We are in the ocean, and at any moment we may be disturbed. Therefore one who is not disturbed at all is called paramahamsa.

Bhakti-yoga is meant for those whose hearts are cleansed, not for the lusty and greedy. Of course, those who are lusty and greedy may try to advance, and gradually they may do so, but once one is situated in bhakti-yoga there is no more lust or greed. Viraktir anyatra ca (Bhagavatam 11.2.42). This is the test – when one is free from lusty desires and greed, then he is situated in bhakti-yoga and is actually a paramahamsa. Kuntidevi humbly submits, “You are meant for the paramahamsas and munis, those who are cleansed in heart and are engaged in bhakti-yoga. But what are we? We are simply women. We are in a lower class. How can we understand You?” Although she understands everything, she still takes the position of an ordinary woman and says, “How can I understand You?” This is humility.

“By the strength of a bundle of sticks.”
The safe boat of devotee association

An Appointment with Mr. Death