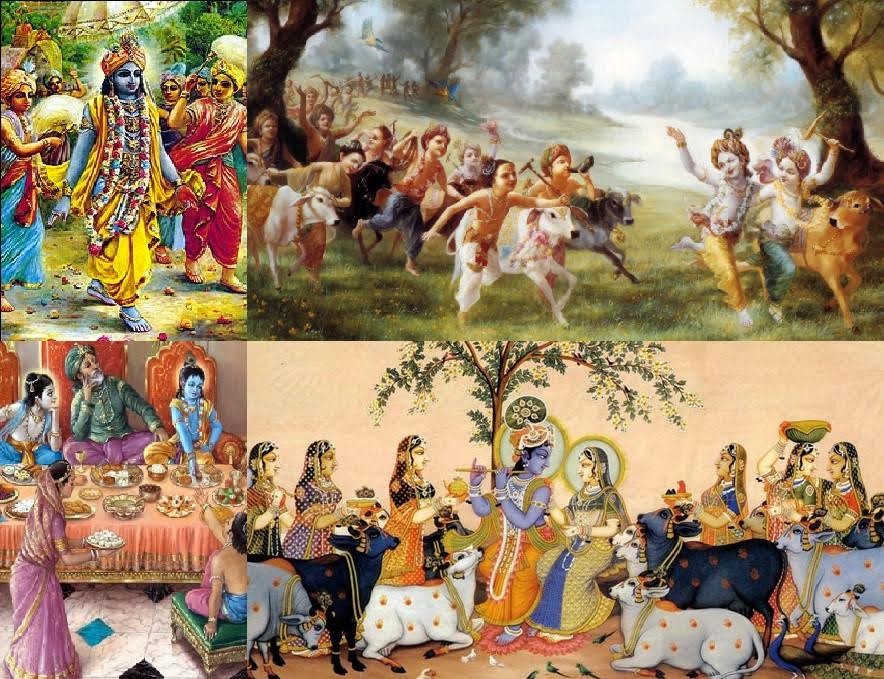 An impersonal philosopher always emphasizes on one point -“The absolute is real, the material world is false”. Giving extra importance to this understanding, he encourages his followers to move towards desire-less state. Since the material world is false or an illusion, it is shear foolishness or ignorance to have desires here as he opines. It is just like a desire to have some water from a mirage. Thus, an impersonalist advises the followers to move from the state of material desire to desire-less state. He also endeavors for its perfection. It means that the spiritual journey of an impersonalist moves from desire to desire-less state. But, thinking, feeling and willing are the natural symptoms of a living spirit. Can a conscious soul be without these symptoms at any time?

While an impersonalist’s spiritual journey continues from a state with desire to a desire-less state, a devotee’s spiritual journey continues from desire to desire! As per the statement of an impersonalist, it is utter foolishness to desire for something in this material world, which in his opinion is just an illusion. But, a devotee never considers this world as an illusion, and he is fully aware of its temporary existence. Since this is a temporary world, whatever obtained here is also of temporary nature. For this reason, a devotee always searches for something which is permanent. He is fully aware of the fact that though this material world is temporary, the creator of this world is permanent. Thus, he tries to take the shelter of Lord Sri Krishna, the Supreme personality of Godhead. Through the media of spiritual master, saintly persons and scriptures, he understands that obtaining Him is the ultimate goal of the human form of life.

Regarding attaining Lord Krishna, Srila Prabhupada commented in Bhagavad-Gita As it Is (15.7 Purport) as under:

“In either case, he (living entity) is qualitatively eternal, as the Supreme Lord is. In his liberated state he is free from this material condition, and he is under the engagement of transcendental service unto the Lord; in his conditioned life he is dominated by the material modes of nature, and he forgets the transcendental loving service of the Lord.”

‘’It is clear, however, in this verse, that the conditioned soul is covered by the material bodies, with the mind and the senses, and when he is liberated this material covering perishes, but his spiritual body manifests itself in its individual capacity.”

“That fragmental portion, when liberated from the bodily entanglement, revives its original spiritual body in the spiritual sky in a spiritual planet and enjoys association with the Supreme Lord.”

From the above statements of Srila Prabhupada, it is obvious that the living entity has to regain his siddha svarupa to associate with the Supreme Lord Sri Krishna. Further, it is very clear that he can receive that wonderful body only after leaving the present material body bondage. It means thatfor the realization of siddha svarupa, liberation from material body bondage is the pre-requisite. But, is there anything else before attaining that state? Srila Prabhupada’s Bhagavad-Gita purport (5.11) gives ananswer to this fundamental question as under:

“A person acting in Krishna Consciousness (or, in other words, in the service of Lord Krishna) with his body, mind, intelligence and words is a liberated person even with in the material world, although he may be engaged in many so-called material activities.”

Here we need to take note of one point. As Srila Prabhupada mentioned above, when the body, mind, intelligence and words are engaged in the service of Lord Krishna for all the 24 hours of the day, it becomes a liberated state. But, if only body and words are engaged, it is not considered a liberate state though the person is superficially engaged in Krishna’s service round the clock. In fact, Lord Krishna also wants from us the service as mentioned above. The Supreme Lord gave instruction on such type of devotional service in Bhagavad-Gita (12.8) as under:

“Just fix your mind upon Me, the Supreme personality of Godhead, and engage all your intelligence in Me. Thus you will live in Me always, without doubt.”

Living with Lord Krishna means living in a supremely blissful and liberated state. Such a state is attained only after leaving the present material body bondage and attaining the liberated state, as explained by Srila Prabhupada in his Bhagavad-Gita purport (15.7). However, in case one cannot control the mind, then bhakti yoga with regulative principles is recommended by Lord Krishna.The purpose of such regulative devotional service is also clearly mentioned by the Lord in Bhagavad-Gita (12.9) as under:

“’My dear Arjuna, O winner of wealth, if you cannot fix your mind upon Me without deviation, then follow the regulative principles of bhakti yoga, in this way develop a desire to attain Me.”

Srila Prabhupada commented on the above verse as under:

“’In this verse, two different processes of bhakti yoga are indicated. The first applies to one who has actually developed an attachment for Krishna, the Supreme Personality of Godhead, by transcendental love. And the other is for one who has not developed an attachment for the Supreme person by transcendental love. For this second class there are different prescribed rules and regulations one can follow to be ultimately elevated to the stage of attachment to Krishna.”

The very purpose of regulated devotional practice is clearly mentioned in the above verseand it is the way to develop a desire to attain Lord Krishna. This way, a devotee will be able to fix both the mind and the intelligence in Krishna. A simple house wife is naturally flooded with love and attachment towards her husband and son. She always keeps them in mind and engages all her intelligence for the activities related to them. She never gets tired in those activities; instead her enthusiasm remains intact for rest of her life. However, we cannot expect a similar behavior from a maidservant, who may be engaged to do similar work. Due to the lack of attachment, she usually involves in nagging and tries to abstain from duty for petty reasons. This situation applies to devotional life also. If one is blessed with desire to attain Krishna, his mind and intelligence get engaged with full spirit in His service. Such a person never gets tired and never gets bored. His regulative devotional service automatically moves to spontaneous devotional service, namely raga bhakti. Thus, transcendental service with a desire to attain Krishna makes devotional life ever joyful (susukham) and it ensures continuous increase in bliss. This clearly confirms the fact that the very purpose of regulative devotional service is to develop the desire to attain Sri Krishna. That very desire makes the devotee to get engaged in transcendental service with mind, intelligence, words and body, and ensures the liberated state. Such a liberated state finally gives opportunity to attain siddha svarupa after leaving the present material body. Thus, developing the desire to attain Sri Krishna becomes the first step towards the ultimate goal.

If we carefully analyze the story of Sri Narada muni, similar observations can be made. Narada muni was a maidservant’s son in his previous life. However, fortunately with the association of Bhaktivedantas, he developed an attraction towards Lord Krishna. After a very long journey, he sat on the banks of a reservoir and meditated on the Lord. He suddenly got the view of the supreme Lord, which in the next moment disappeared. He attempted to see the same form again, but all the efforts were in vain. However, he heard the sweet words of Lord Krishna as guidance as under (SB 1.6.22):

“O virtuous one, you have only once seen My person, and this is just to increase your desire for Me, because the more you hanker for Me, the more you will be freed from all material desires.”

In case of Sri Narada muni, the Supreme Lord appeared once in meditation and thus allowed him to develop an intense desire for Him. But, the same Lord in Bhagavad-Gita suggested all to develop a desire to attain Him through regulative devotional service if one has not developed actual attachment for Him. Narada muni continued his mediation as per the guidance of the Supreme Lord, got rid of all attachments and finally left his material body. Only then, he got thespiritual body that was suitable for Lord’s association.

In summary, impersonalist philosophers try to travel from a state full of desires to desire-less state, whereas devotees initiate their spiritual journey from desire (material desire) to desire of attaining Krishna. From that state, they travel uninterruptedly towards the final goal of Lord Krishna’s association in their choice mellow. Intense desire to attain Krishna awards them the liberated state while living in this material world, thus ensuring the siddha svarupa after leaving the present body. This whole process makes the desire to attain Krishna the first step towards the siddha svarupa realization in the spiritual world.

Our original position according to the Sandarbhas

The Geocentric Design Of The Solar System