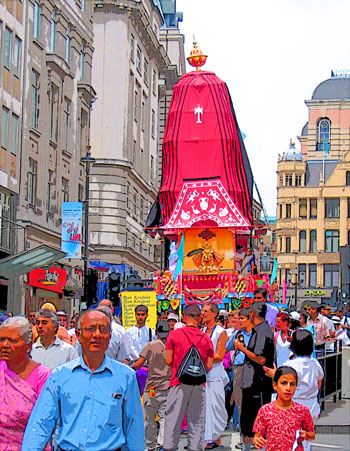 Here is what happened in London on Sunday:

In the morning I peacefully chanted eight rounds in the backyard of the flat where I was staying. Then my hosts, Amol and Kartik, and I rode a bus and train and taxi to Bhaktivedanta Manor. We arrived at nine and had darsana and then began greeting friends, one after another after another, which is a special feature of the London Ratha-yatra: reunions with devotees who have come from all over the place (similar to the way Krsna and the Yadus and the Brijbasis were reunited at Kuruksetra).

At 10:30 Bhagadatta Prabhu got us on the bus going to the parade.

When I entered the parade area on foot, I paid obeisances on the grass before the three carts. Then I stood and meditated on devotional service. I could see the front of all three carts as I waited for the Deities to appear. Soon, one by one, the Deities were lifted to the carts and briefly hidden behind a curtain while Their paraphernalia was adjusted. Each time a curtain was drawn, I paid obeisances from afar: first to Balarama, on the front cart, then to Srila Prabhupada and Subhadra, and finally to Lord Jagannatha.

Bhakti Caru Swami showed up behind me. Maharaja was greeting devotees, and we had a minute to exchange greetings. Earlier in the week I had heard him give a class in London. He is a deliberate speaker. His conviction can be felt. His words and voice are pleasant to hear. His descriptions are detailed and penetrating. So today I told him that I was happy to have his association, and he jokingly replied, “Are you trying to get rid of me?”

Then what we had been waiting for all week began: the carts began to roll. Everyone, even onlookers, started moving in response to the parade’s movement, which initially was slow, like jets entering a runway one by one. The anticipation we had all been feeling reached a climax.

Half of Picadilly Street was closed to traffic for our parade. Unlike in Jagannatha Puri, we could not organize kirtans on the sides of the carts, too; anyway, we use amplification systems, which makes that unnecessary. Sacinandana Swami led a lively kirtan before Jagannatha’s cart. Gopala Krishna Goswami and Bhakti Visrambha Madhava Goswami led kirtans, too, in front of the other carts.

Many Indian congregational families were there, looking bright and happy.
(See photo.) The innocent boys and girls beamed, and their parents volunteered for various menial services such as sweeping the road and helping to control the crowds. Everyone could feel enlivened and transcendentally happy.

When we got to Trafalgar Square, I helped pull the carts onto the Square. They were parked in front of the National Gallery, on the level overlooking the square where our stage and tents stood. The stage programs started with a graceful Odissi dance by a devotee for the pleasure of Lord Jagannatha, Baladeva and Subhadra.

Bhakti Caru Swami gave a welcome address in which he explained that this festival is about kidnapping God.

The drama of the scholar and boatman was enacted. Every time it is put on, it has another flavor, depending upon which actors play the parts.

Various kirtans took place, including a solo kirtana by Jayadeva and group kirtans by devotees.

At the end, when the deities were getting into Their cars — a Rolls Royce and two Mercedes Benzes — we had a kirtana to see them off. Lord Jagannatha was the last to get into a car — the Rolls — and His transcendental body was momentarily parallel to the ground as He was lifted into the back seat.

The devotee leading kirtana said immediately afterward that we really feel connected heart to heart to the Deities when we put on Rathaytra. The topmost yoga!

Back to temple, we had darsana of all the Deities, including Sri Sri Radha-Londonisvara. Now it was time to say good-bye to Them and see Them for the last time during this visit.

Govinda’s restaurant opened, to distribute the maha-prasadam that was offered during the parade, which could not be distributed in public because of regulations.