The Passing of Kurma-rupa dasa 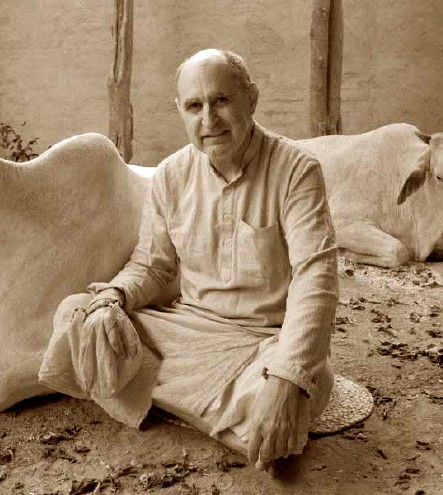 The Passing of Kurma-rupa dasa.

I present the following as an offering to Kuram-rupa Prabhu’s friends and associates.

In a small cow-dung covered room in the living quarters of the cowherd men of the Care for Cows go-sadan, Kurma-rupa prabhu lay, his bed positioned facing the eastern door with a clear view of the many cows roaming in the compound. Sitting amongst branches of the tall trees surrounding the go-sadan, peacocks sang to each other, calling, while quail birds skitted about here and there, adding their voice to the melody of Vrindavan. Brass bells on the necks of healthy and well fed cows chimed, being dictated to by the beat of the monsoon winds and the sway of go-mata’s auspicious dulap. As this symphony played, a melodious contemplation on the glories of Vrindavan arose in the minds of those who could hear.

Prabhu remained alert, spoke philosophy, and concluded the administrative and financial arrangements necessary for the continued protection of the cows of Vrindavan. But days and weeks of fasting were now causing his external senses to fail. Bright lights became difficult to bear, sounds seemed further away, whatever small amounts of liquid were taken could only be swallowed with difficulty, and signing of legal documents was impossibly slow.

During one day Prabhu spoke of Bhagavan Shri Krishna’s expertise in dealing with His dear devotee Arjuna. Prabhu explained that Krishna instructed Arjuna to give up affection for his compromised gurus Bhishmadev and Dronacarya, but as these two personalities were senior to Krishna, the Supreme Lord therefore did not criticise them directly but instead criticised Arjuna for his misplaced magnanimity, and for not having the potency and strength of heart to follow dharma. Prabhu was moved to tears contemplating Krishna’s deft and wonderful expertise and compassion in encouraging Arjuna to renounce leaders who did not display the highest levels of integrity.

Devotees travelled great distances leaving their homes and loved ones to be with him at this time. Messages and prayers were sent by those who could not attend this great event. Local Vrajavasis appeared, some to pay their last respects, some to perform curative rituals, and some to chant protective mantras. A group of beautiful clean young boys and girls appeared, sent by their loving mothers and fathers, and sang to him: “Jaya jaya nanda yashoda dulal giri varadhari gopal.” Prabhu become visibly emotional at hearing the names of the boy of Vrindavan who roams about with His cows and cowherd friends.

One servant asked Prabhu “Where do you find your mind is turning to at this moment?” Prabhu replied that his mind was turning to the unparalleled expertise, dedication and determination of Srila Prabhupada in presenting the sacred Bhagavad-gita to the world and to the devotees: “For one who explains this supreme secret to the devotees, pure devotional service is guaranteed, and at the end he will come back to Me. There is no servant in this world more dear to Me than he, nor will there ever be one more dear.” [18.68-69]

During his last night Prabhu became far more restless than in previous nights, frequently sitting or standing, his now frail body distressed by the increasing disturbances in bodily airs that accompanies the soul’s departure from its frame. The servants contemplated how to relieve the discomfort—perhaps by hydration, perhaps by vitamin intake, or perhaps by specially prepared Ayurvedic juices. The treating Doctor cautioned against any course of action that would provide relief in the short term but would serve only to prolong any suffering and the ultimate inevitable result. The torment of the circumstance was intolerable but whatever services were rendered, all sort for Prabhu’s comfort. Days before, Prabhu had said “I am dying and I am happy die” – to some, such statements bought joy, while to others it bought pain and drove them, like a mother protecting her child, to seek any means available to ensure Prabhu remain in their association as long as possible.

Some fortunate servants remained with Prabhu for many days and nights, tending to his needs. Now, in this fresh early morning, Prabhu remained silent and barely moving, communicating only via head or eye movements. The lead kirtaneer sang a sombre melody imbibing everyone with an unrelenting focus on the holy names of the Lord.

Throughout the morning Prabhu’s breathing began to slow until air moved only in short breaths—a sign that death was making an authorised approach. A servant bent down close to his ear and in a whispering tone requested that he step through that great door dreaded by common people. The small room filled to capacity as friends, servants, well-wishers and cowherd men gathered to witness the passing of that great protector of dharma.

Prabhu’s gaze became fixed—a sign that death was now within touching distance. The chanting of the holy names continued condensing like a thick smoke, the karatalas grew more rapid, the strains of the harmonium increasing in desperation, as did the emotions of each devotee present. Each devotee experienced sentiments according to their heart—one become blind with tears unable to see anything, another chanted sacred texts in a faltering voice, others vigorously clapped their hands to the sweet and strong mrdanga, others raised their arms while shouting the names of the Lord. One devotee chanted loudly with a beaming smile on his face considering Prabhu’s and his own good fortune, one servant danced by Prabhu’s bedside, arms raised, tears streaming down his face, another could only hold Prabhu’s hand tightly while staring deeply into his eyes. With shaking hands, a servant poured drops of water from holy rivers on Prabhu’s tongue, placed tulasis leaves on his forehead and gently placed Prabhu’s salagrama-sila on his chest.

The kirtan grew louder and louder, condensing to an impossibly thick and heavy state until one’s very breath was saturated with the holy names. One could not find any atom of space or particle of earth that was not dripping with Krishna’s holy name. Prabhu’s finger tapped to the beat of the kirtan, he gave a few short gasps, opened his mouth gently wider and left the body as an enveloping wall of sound formed in which names of Hare, Krishna, and Rama simultaneously merged into one yet were distinct, was both inside yet outside of one’s body, was divinely uplifting yet incredibly grave, was full of immense joy yet profound sadness, and was both life and death. A devotee shouted through his tears “Haribol!” and the assembled devotees shouted “Haribol, Haribol, Haribol!” The shouts of “Haribol” merged with the loud chanting of the Hare Krishna maha-mantra, which merged the sweet ringing of the karatalas and the explosive booms of the mrdanga, all of which lifted the sublimely powerful voices of all the assembled devotees to create an all-pervading tidal wave of hari-nama that had a life of its own and which penetrated all known directions seen and unseen.

And Prabhu was gone.

After some time the kirtan subsided. Some devotees left the room in despair, while others remained happy and joyful at the thought of Prabhu’s destination. Others cried into their hands or to the sky lamenting their great misfortune at the loss of a mahatma. Others sat or stood, staring vacantly. To an outsider it appeared to be a stare of intense concentration but their stare was a blank vacant one—the stare of one stunned and speechless, of one who has lost his way, of one who has lost their guiding light.

One Response to “The Passing of Kurma-rupa dasa”