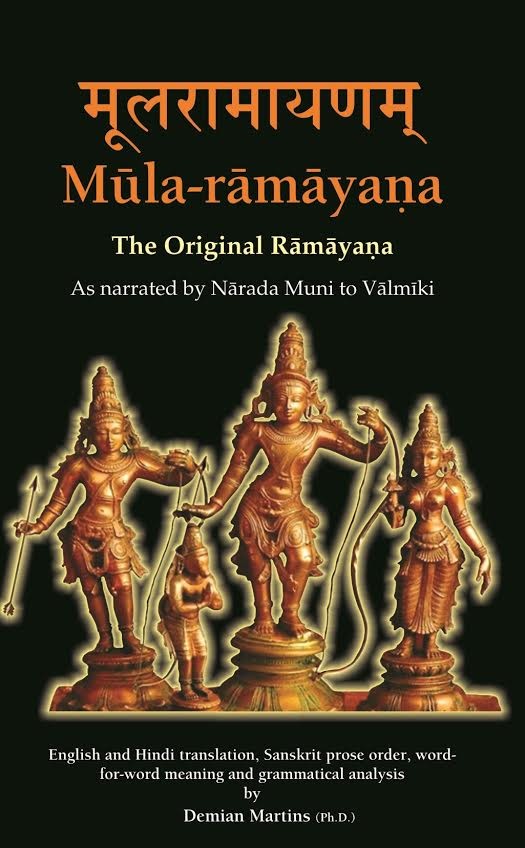 In order to fill a long felt lacuna for those who wish to start reading Samskritam, a new edition of the Mula-ramayana has just been released by Bhakta Demian Martins, an ISKCON brahmacari who holds a Ph.D. in Samskrita from the Benares Hindu University. Bhakta Demian joined ISKCON at Brazil, and spent ten years studying Samskritam at Benares. He now resides at Vrindavan, where he has undertaken research into the works of the great Gaudiya Vaishnav scholar, Baladev Vidyabhushana. His aim is obtain, translate, and publish all of Baladev’s thirty or so compositions.

Once upon a time, while the sage Valmiki was performing austerities on the bank of the river Tamasa, Narada Muni appeared before him and narrated a summary of the Ramayana, called the “Mula-ramayana” or the Original Ramayana.

This Mula-ramayana is indeed the very first chapter in the Bala-kanda of Valmiki’s Ramayana and it consists of the main episodes of Sri Rama’s pastimes summarized in one hundred verses.

The text itself suggests that the meeting of the sages took place some time after Sri Rama had defeated Ravana and before He became the king of Ayodhya. After hearing the Mula-ramayana, the sage Valmiki composed thousands of Samskrita verses to elaborately narrate all the incidents in this great epic. The Valmiki Ramayana consists of twenty four thousand shlokas in total.

Accepted as avatars of Lord Visnu and Lord Siva respectively, Sri Rama and Hanuman are some of the most beloved among the divinities in Hinduism and are worshipped in thousands of temples all over the world.

For many centuries, Valmiki has been known as the adi-kavi, the first poet, and his Ramayana is considered by many as the most ancient poem, so famous in the Indian subcontinent that its story line is known in nearly every house.

After the Mahabharata, Valmiki’s Ramayana is considered the second greatest Samskrita epic and it has influenced the philosophy, religion, and culture of India for centuries. Remarkably it has influenced the later Samskrita poetry, drama and literature, and inspired many poets to write their own versions of the epic, among which some of the most notable are Kalidasa’s Samskrita mahakavya “Raghu-vamsa,” written in the 5th century C.E., and Tulasidasa’s “Rama-carita-manasa,” written in Avadhi in the 16th century, which became so popular in North India.

The “Mula-ramayana” has been used as a text book in innumerable colleges and schools all over India. This bilingual translation was prepared intending to fulfil the needs of both ISKCON devotees, as well as a broad range of students. The grammatical analysis furnished by the author presents the basic morphological classification of the vocabulary and some elements of the syntax.

The word-for-word meaning was done with the help of three traditional Samskrita commentaries: Govinda-raja’s Ramayana-bhusana, Nagoji Bhatta’s Ramayana-tilaka and Siva-sahaya’s Ramayana-siromani. The prose order (anvaya) of the Samskrita texts was done according to the way the verses were interpreted and translated. For didactic purposes, the English and Hindi translations are mostly literal. This edition is an ideal companion for those who are being introduced to the Samskrita language.

Those who wish to order this book may write to bkdemian@hotmail.com

Krishna as King
Jiva dance back to rasa-lila