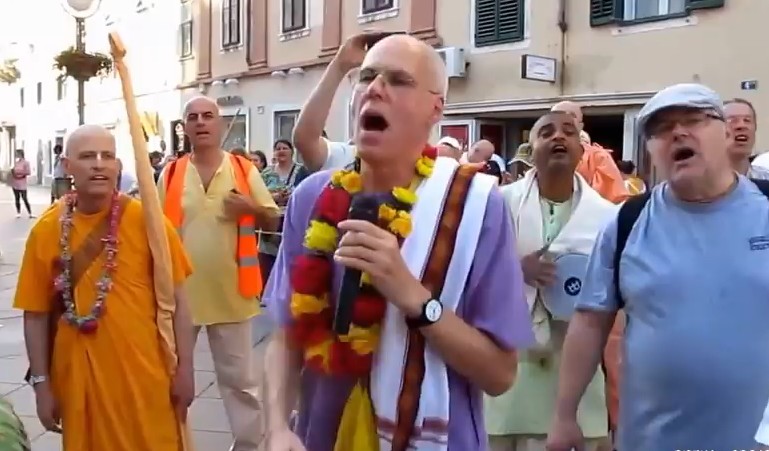 “O KRISHNA! TEARS FILL MY EYES WHEN I HEAR YOUR NAMES BEING GLORIFIED BY PURE DEVOTEES.”

Croatia, officially known as the Republic of Croatia, is a sovereign state at the crossroads of Central Europe, Southeast Europe, and the Mediterranean. Its capital city is Zagreb, which forms one of the country’s primary subdivisions, along with its twenty counties. Croatia covers 56,594 square kilometres (21,851 square miles) and has diverse, mostly continental and Mediterranean climates. Croatia’s Adriatic Sea coast contains more than a thousand islands. The country’s population is 4.28 million, most of whom are Croats, with the most common religious denomination being Roman Catholicism.

The 13th annual Ratha Yatra Festival in Rijeka, Croatia was held on Saturday, 6th June, 2015. The procession started at 5pm from Jelacic Square then proceeded through Korzo street to Jadranski Trg and back to Korzo. A stage program was held from 7pm to 9pm.

Prasadam distribution was held at 7.30 pm near the parking precinct of the Chariot.

This was the largest public ISKCON or Hare Krishna festival in Croatia and the main street in Rijeka, Korzo was filled with cheerful devotees of Lord Jagannatha, Baladeva and Subhadra Devi.

Hare Krishna!
In the name of all Rijeka devotees,
Your humble servant,
Dvaraka-Gamana Devi Dasi

Where Is Godhead? Is It Possible To See Him?
Bhumi Puja at Jagannath Puri

It Doesn’t Matter Who, Where, or When You Are