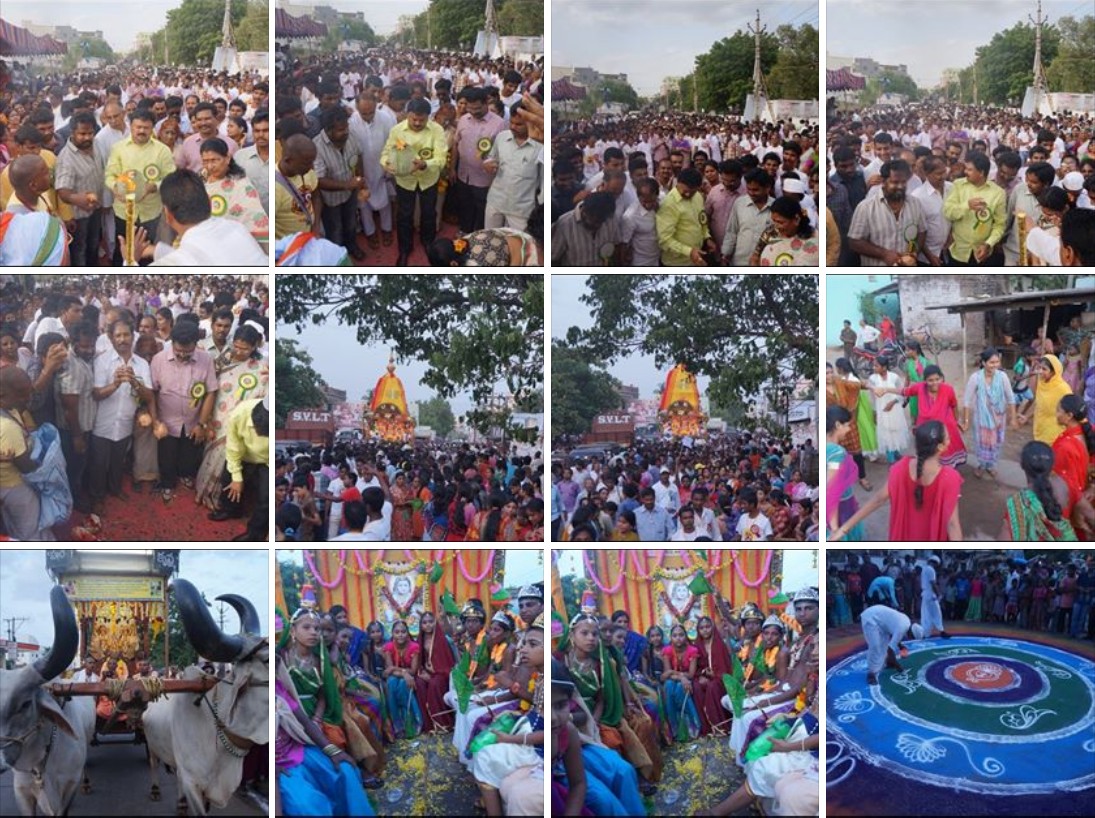 Gudur is a town in the Nellore District of Andhra Pradesh, located around 140 kilometers North of one of India’s largest cities, Chennai, on National Highway 5. It is well known for large natural deposits of the mineral “mica” in and around the town.

The town is also important due to the Railway station, a very large junction station connecting Chennai to Vijayawada, and from there to North, West, and Eastern India.

Nellore district is also famous for the local varieties of rice that have been grown there for millenia. Gudur is just 40 kilometers South of Nellore, the district headquarters, where ISKCON sannyasi Sukhadev Swami has established a temple of Lord Jagannath, Lord Baladev and Subhadradevi, as well as a large ashram.

Sukhadev Swami, originally from Andhra Pradesh, was a practicing medical doctor in the United States. He became frustrated with his material circumstances, returned to India and joined ISKCON at Bombay back during 1983-84.

For many years he preached and ran a small preaching center at the holy place of Kurukshetra, where the Bhagavad-gita was spoken by Lord Krishna to Arjuna on the battlefield, in the famous war described in the Mahabharata, or great history of India.

Later on, Sukhadev Swami decided he would be of better service to ISKCON by preaching in his native Telugu language, and he established and developed the ISKCON center at Nellore.

For the past three years, Sukhadev Swami and his followers at Nellore have been organizing the Jagannath Rathayatra festival at Gudur. This year it was observed on Saturday, July 11, 2015.

On a stage erected at the inaugural point of the Jagannath Rathayatra procession – opposite the DNR Hall and grounds, prominent local civil leaders spoke felicitating the Rathayatra program in an inaugural function.

The Rathayatra procession started from the DNR Community hall thereafter at around 4 PM, and proceeded through the main streets of the town, from Sangam Theater, Bazar Street, passing in front of the Gandhi Statue, then Bankim Saipet, then passed the Gudur Railway Station, Clock Tower, Raja Street, Kumari Street, and back to the DNR Community hall.

The procssion went on for about five hours! Thousands of residents of Gudur saw the procession, and there was profuse distribution of “bundi” prasad, packed in tiny paper pouches with markings, that were both thrown to the public from the Rath cart, as well as distributed hand to hand by devotees accompanying the Ratha.

At various places along the procession route, decorative “rangoli” (multicolored designs made with colored powders on the road itself) were spontaneously made by congregational devotees.

Akhiladhar Das, a senior ISKCON devotee, as well as twenty five devotees of the all India ISKCON padayatra also participated in the Rathayatra.

After the procession Sukhadev Swami and Basu Ghosh Das spoke in the DNR Hall auditorium.

The DNR hall and the ground are located near Market road at Gudur. On the ground a small temple for Lord Jagannath, Baladev, and Subhdradevi was erected for the occasion. Also 108 steps were provided to encourage the public to chant Hare Krishna mahamantra japa on japa malas. Cards with the mahamantra in Telugu were distributed to the public at the festival site.

Prasad – including vegetable pulao, curd (yoghurt) rice, sambhar rice, bundi (sweet) was distributed to around three thousand people. Kirtan in front of Lord Jagannath continued into the night while the public viewed theistic exhibitions and took prasad on the grounds.

After the lectures, several supporters of the program where feliciated, and books were signed by Sukhadev Swami and Basu Ghosh Das on the auditorium stage.

All in all, it was a very successful event! Because of the positive response to ISKCON from the local public at Gudur, an extension center of ISKCON Nellore will open at Gudur in the very near future.

Pictures uploaded to the internet (can be viewed even if one does NOT have a Facebook account):
http://tinyurl.com/oy2hrh9

Alfred Ford is Building a Multi-Million Dollar Monument in India