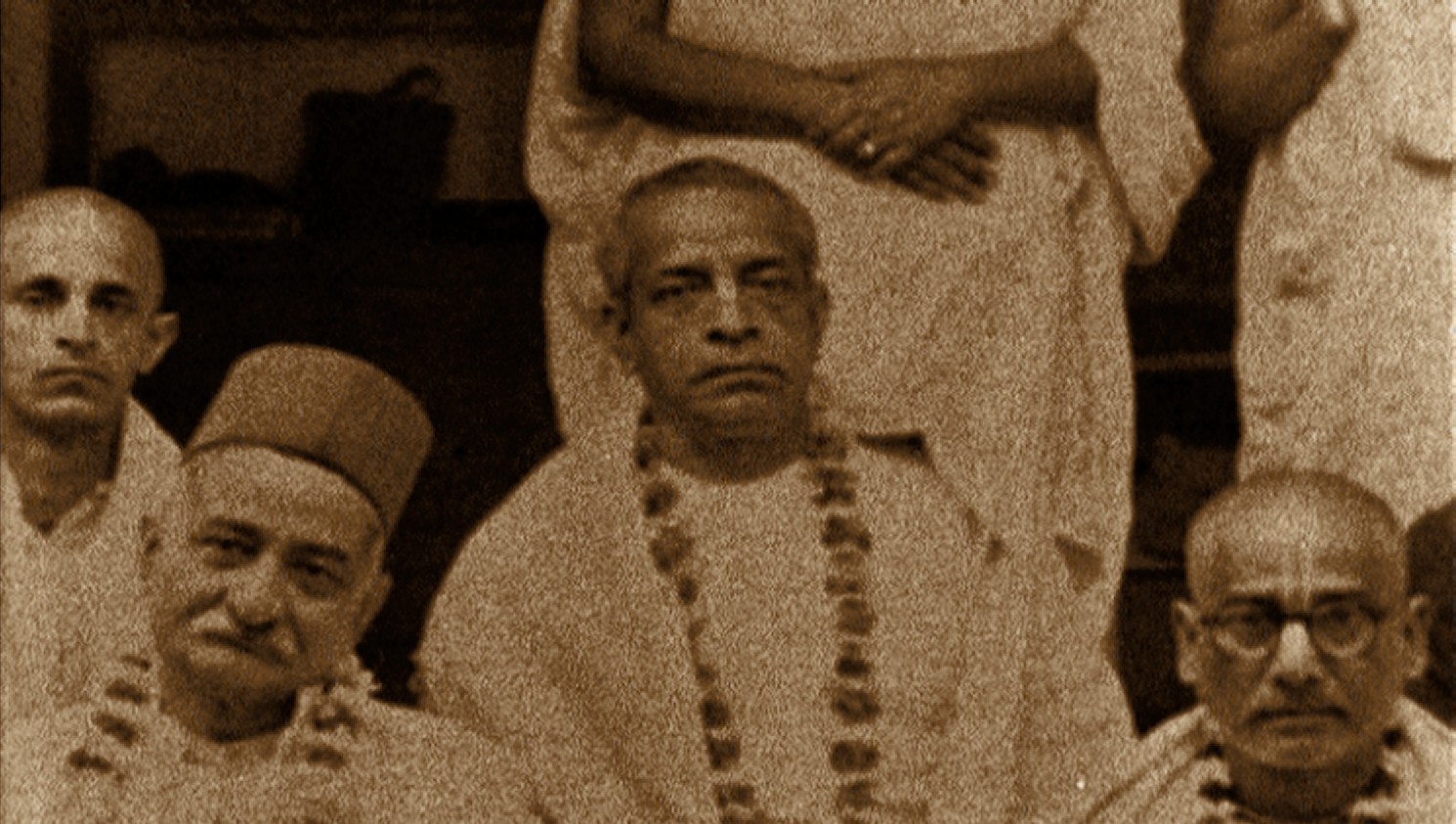 Translation
The atheists, who accumulate wealth unlawfully for the matter of sense-gratification, are bound up by hundreds of thousands hopes against hope by network of it.

Purport
In our issue of Back to Godhead Vol. lll part Vlll dated 20,6/56, we had to discuss something about nationalism of pure consciousness. Sometime we meet gentlemen of uptodate taste and try to make them interested in the matter of “Back to Godhead.” Unfortunately we meet 80% men of atheistic views and they say very frankly that they have not only no interest in such theistic subject but also they condemn the attempt to bring back people in general to the path of “Back to Godhead.”

According to these gentlemen, economic conditions of the Indian people deteriorated on account of their too much faith in God and the sooner they forget everything about Godhead, it is better for them. But we cannot agree with this atheistic conclusion of such uptodate gentlemen devoid of the sense of Godhead.

India was never so much dependent on the occupation of service than they are now. With the advancement of Godless materialistic education, the Indian people at the present moment are more dependent on service than anything else. There was report in the press that during the year ending in 1955, applicants for services in the employment exchange of Delhi only were recorded to the extent of 120,000. Out of these applicants only 15,000 men were provided with some suitable services but others were disappointed or still remained unemployed. The number of unemployed is increasing daily particularly in the educated section. Whenever there is some vacancy in some important or non important posts, there are thousands of applications to fill it. More than 80 p.c. of the population are not provided with the bare necessities of life what to speak of other amenities. Some of the well posted Government servants or some of the fortunate businessmen feel themselves happy but 90 per cent of their brother citizens do not know how to meet the both ends together and therefore the economic condition is definitely not satisfactory. This economic deterioration of the mass of people is not only visible in India but it is also so and so all over the world. The planning commission in India is of course making various plans to improve the economic conditions of the Indian people but we may take lessons from other country where the planning commissions have finished their duties. We must be frank enough to admit that the economic conditions of general mass of people have not improved.

Recently when Mr. Truman was in London, he admitted very frankly that independence means comfortable life for every one. At least that is the expectation of all common men which is never to be fulfilled. When the World War ll was going on, one compounder enquired whether the Japanese were coming in India. The purpose of the enquiry was that if the Japanese came in India, the country will be independent. The compounder was met again after 1947 and he was asked how he has improved his comfortable life. The compounder with much regret replied that he has not improved his lot in the least after independence, on the contrary the family expenditure has increased so much that it has become almost incompatible with his economic condition. On the whole the story was nobody’s life has become more comfortable after independence as it ought to have been according to Mr. Truman. According to Mr. Truman, if a section of a nation live very comfortably in the material sense and feel thereby false happiness, without caring for his brother haves not — it must be called an illusion only. That is not the independence ever in the opinion of Mr. Truman the retired President of U.S.A.

The economic condition of the people cannot be improved by such godless adventures. In our article ‘Grow more food’ published in the Vl part of ‘Back to Godhead’, we have brought to the notice of our readers that there are five causes to effect a particular action. And the most important cause is called the ‘Daiva’ or the unseen hand of the agent of Godhead. However efficient may be the other causes such as the place, the worker, the attempt and the instrument — without the favourable help of the ‘Divine’ cause nothing can be effected very satisfactorily. The S.R.C. catastrophe which is still going on in the cities of Gujarat was never expected by the leaders of the country but it has come to take place by the ‘Divine’ cause beyond the reach of efficient statesmen.

Atheist Ravana did not believe in the ‘Divine’ cause and firmly believed in his own capacity. He was a declared enemy of Shri Ramachandra the Personality of Godhead and on his own strength he thought it wise to construct a staircase for every one’s use and to approach the kingdom of heaven without the necessary qualifications.

The present generation of materialistic thought is direct descendent of Ravana because all of them think in terms of Ravana’s staircase leading to the kingdom of heaven. Such people completely ignore the superior strength of the Daiva cause. We may again use the example of the S.R.C. Report in this connection. The report was prepared with great care by the eminent and most erudite personalities for the good of all Provinces and the particular staircase, leading to the heaven of provincial or linguistic amity, was constructed at a cost of many lacs of rupees. Unfortunately the ‘Daivi’ cause was unknown to the reporting gentlemen which did not favour the cause and as such the resultant violence is still going on at Ahmedabad and other parts of the country at the cost of many lives and considerable loss of national wealth. They are all due to godless thought without any care for the unseen hand of the Supreme.

Such thinking men are surely bound up by such hundreds and thousands of thoughts all produced by unsatiable lust. And in the absence of such lust being fulfilled satisfactorily to the parties concerned they are followed by anger, rupture, insanity, violence, loss of intelligence and at last destruction of everything.

The different groups of atheist thinkers have different kinds of plans in the brain and they are exhibited in different patterns of godlessness. One set of atheistic nation thinks on it in a different way and all of them clash at a point of overlapping circles caused by the ‘Daiva’ way. This is so because none of these thoughts of different groups is beyond the range of direct perception of the material sense without any spiritual knowledge. Therefore the quality of such different thought is always the same but the varieties are presented in multi-colourful attraction for the foolish mass of people. We have already discussed this point at length in our article ‘All Compact in Thought’.

The mass of people are themselves blind to see everything in their true perspective and they are now made to follow similar blind leaders under various political arrangement. They are made to follow either of the above multi-colourful ideals sure to be failure in the long run and therefore they are made to hope against hope in a practical way.

There are many hope against hope parties and whenever there is failure of the sense-gratificatory processes the different parties are put into violent dangers. This dangerous position of each one of the parties leads them to fight one with another and at the end one of the parties become victim of another for the sake of a false ideology unknown to the people. The communal flare-up of this iron-age is now an ordinary occurance, due to godless advancement of material learning. The poor followers and innocent passers by are however to suffer such ideologies and it is so because the mass of people are gradually being driven to the hopeless condition of a godless civilization which has no information of a spiritual status of life and they are now kept in darkness in the bewildered state of sense gratification.

Such persons therefore who seek happiness in the chain of hope against hope by sense gratification, try to accumulate wealth by unlawful means. In impure consciousness without the knowledge of the proprietorship right of the Supreme Lord — everything is accumulated unlawfully because everything that we have all belongs to the Supreme Lord. This unlawful accumulation of wealth is effected not only in black market but also in the the open day light by unlawful means. Even the so called Sannyasins accumulate money by collecting donation from the public unlawfully to create a personal property for sense gratification forgetting the proprietorship right of the Supreme Lord.

The word black market has come to stay now on account of the black mailing attempt of the staunch sense gratifiers. Persuaded by such strong sense of sense gratificatory propensity of black-marketing habit, it is now experienced that even the millionaires do sometimes commit criminal appropriation of others’ money. When a poor man commits criminal misappropriation, we can understand the poverty driven propensity of the poor man but when we see that a millionaire merchant or high administrator or a holy Sanyasi (?) is committing such criminal offences, we can understand the strong directive of sense-gratification attitude caused by godless civilization. Such unlawful sense-gratificatory process continues to act as hope against hope and they are never satisfied whether by force or by law. A godless civilization can accelerate this process of hope against hope for sense-gratification but this atmosphere of animalism will never bring the desired peace.

[Please note: The articles in this series have been typed from copies of the original manuscripts which are sometimes unclear. As far as possible, every attempt has been made to reproduce them without change.]
Gundica-marjana
The passing of Jagat Pati