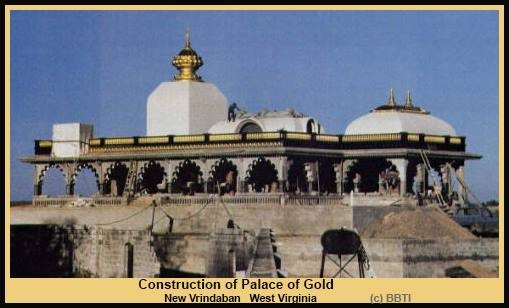 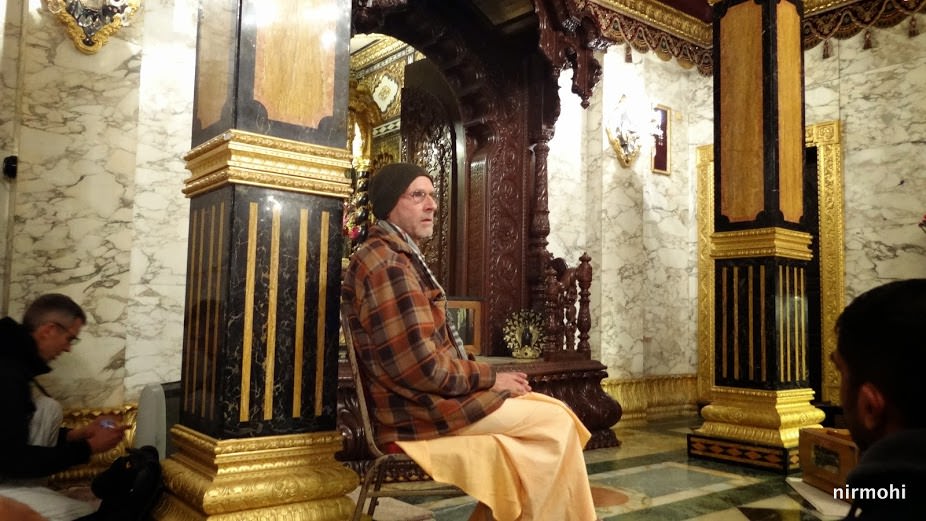 “Excavation for Govindaji Mandir began in the spring of 1973. New Vrindaban hired Bob Black, a local farmer who owned a backhoe, to excavate the footer for Govindaji Mandir. I assisted Bob by providing transit work (leveling the ground) while he excavated. Our efforts were not very successful, however, because the machine was not adequate to break through the rock.

When I informed Kirtanananda Swami about the complication with the rock he replied, “When Indra wants to break up rock mountain tops, he sends his thunderbolts.” I remembered having read that, but I didn’t see how it would apply in this situation.

The episode with the rock helped provide the shift in the community’s focus from Govindaji Mandir to Srila Prabhupada’s Palace. The complication with the excavation of the footer for Govindaji Mandir put the temple construction project on hold. This provided the opportunity to excavate the footer for Srila Prabhupada’s Palace, which went smoothly and the devotee construction crew set up its batter boards (stakes and strings used to establish the grade and elevation to pour a concrete footer).

After excavating the footer at the Palace, I went back to farming. One day, I was plowing the fields at Bahulavan across the road from Govindaji Hill, preparing the ground to plant corn. I was pushing to finish plowing the field when dark rain clouds started moving in from the west and a cool breeze began to blow, making it clear that it was about to rain.

It was hot and the horses were sweating profusely. When horses are that hot, they can’t be out in the rain or they’ll get sick. Therefore, I pushed right up to the final minute and then unhooked the plow and put the horses in the barn just as the rain began.

The rain quickly turned into a severe thunderstorm. The downpour was so heavy that I chose to sleep in the manger in the horse barn that night rather than walk through the storm back to the ashram.

I couldn’t sleep because the thunder was blasting all night. The window outside the manger opened in the direction of Govindaji Hill and I observed something all through the night that I had never seen before. Lightning kept striking at normal intervals, twelve to fifteen times, all through the night. Every single time, it hit the exact same place –the excavation site of the temple on top of Govindaji Hill.

For the next few days, the footer of Govindaji Mandir was filled with water, delaying the excavation even longer. Meanwhile, construction proceeded at the Palace.

A few days later, after the water had drained out of the footer, Bob and I went back up to Govindaji Hill and continued the footer exaction. To our surprise and delight, the rock broke out easily this time. I cannot say definitely that it was because of the lightning because standing water will also loosen layered rock.

The excavation for the footer of Govindaji Mandir was completed in time so that the community was able to conduct two simultaneous installation ceremonies. There was a grand installation ceremony in Bahulaban for the cornerstone of Govindaji Mandir, the first of the seven temples that Srila Prabhupada had envisioned in New Vrindaban. There was another cornerstone ceremony for Srila Prabhupada’s Palace of Gold.

Ananta Sesa, the personification of the support system for the universe, was installed in the cornerstone of both footers simultaneously. This was the last step that was taken in the construction of Govindaji Mandir and for Srila Prabhupada’s vision for “seven temples on seven hills” for the next thirty years.”