The Hazards of Synthetic Sindoor 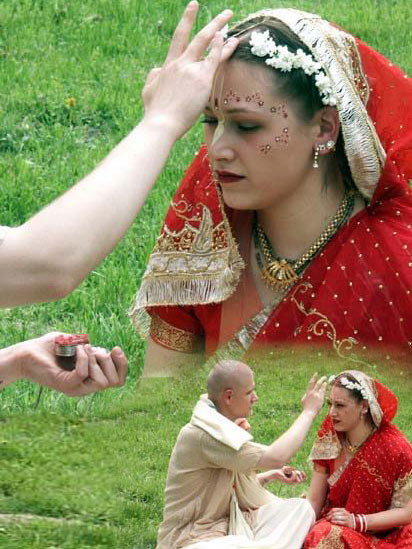 The recent New Jersey case in which a couple and their 13-year-old child were diagnosed with serious lead poisoning due to regular consumption of sindoor as a food coloring has come as a shock. Sindoor was never meant for use in any type of eatable. Sindoor or kumkum as it is known in the South, is meant for use as a forehead mark, referred to as tilak, bindi or pottu, put on the spot between the brows which is considered the seat of latent wisdom, the ajna chakra. The case highlights modern cosmetic manufacturers’ use of synthetic and often dangerous materials for making sindoor, which are harmful, even when just used for ornamentation

While sindoor was the ancient name given to the very toxic, red, mercury oxide, as a cosmetic its most common base is turmeric powder which becomes red when mixed with lime juice or lime powder (calcium compound), moistened in water, or with alum, iodine and camphor, or with oil and sea shell powder (calcium salts), or aguru, chandan and kasturi. It can also be made of sandalwood mixed with musk, or from a mixture of saffron ground with kusumbha flower. Another traditional ingredient used in making kumkum was raw rice in water heated in a pan until it formed into a glue-like red carbonaceous compound which solidified on cooling. At the time of placing the kumkum, it was made into a paste by adding water. National Botanical Research Institute (NBRI) color experts say that in olden days sindoor was made with a special type of red marble stone, covered with turmeric and a little oil and left undisturbed for a few days, after which it turned into red powder. In Tamil, turmeric powder is known as manjal and the final product is called manjal kunkumam.

However, these traditional preparations have long been forgotten. Today most modern cosmetic product manufacturers produce sindoor and kumkum from synthetic materials, lead, zinc and industrial dyes. It is also called red lead (Pb3O4). Manufacturers follow no single method. Some mix oxidized metals and substandard oil to bring about the texture. Now sindoor is also available in liquid form. Scientists also say that it would not be surprising if the red sindoor color was attained by adding Rhodamine B dye, which can induce hereditary disorders. Red is also being derived from mercury sulphite, which can cause skin cancer. All these toxic substances can trigger hair loss, edema and erythema.

Way back in 1994, a working group comprising the Central Pollution Control Board (CPCB), Delhi, CUTS and Pharmacopoeial Laboratory of Indian Medicine (PLIM), Ghaziabad, was formed to verify the detailed technical information of ingredients of liquid kumkum, sticker bindi and sindoor before awarding the Ecomark. Ecomarked products must satisfy the quality, performance and safety requirements of the Bureau of Indian Standards (BIS). These products are also required to declare the list of critical inputs and are not supposed to be manufactured from any carcinogenic or harmful ingredients. Though the Ecomark has been made mandatory, to date no producer of sindoor or kumkum has applied for it.

Sindoor can cause local irritation and skin toxicity, says N. M. Khanna, an ex-Central Drug Research Institute scientist. The nature of sindoor or kumkum can change with exposure to the environment over time and this can result in blisters, itching, rashes, pigmentation and, at times, serious dermatological disorders. In a survey conducted by the Consumer Unity and Trusts Society (CUTS), Kolkata, in November 2001, half of the respondents (consumers) said that they had suffered allergic reaction to personal care products which included bindi and sindoor. The synthetic adhesive used in sticker bindis may lead to eczema, leucoderma or skin irritation. Dr. Roopa Vajpayee, a consumer activist of Delhi-based Voluntary Organisation in Interest of Consumer Education (VOICE), says the use of sticker bindis can cause white patches on the forehead.

Monitorings of lead levels in food materials undertaken from time to time by the Industrial Toxicology Research Centre (ITRC) have also found possible exposure to lead through adulterated sindoor. A scientist at ITRC says lead enters humans mostly through ingestion, inhalation, skin absorption and in utero exposures. Ingestion can occur through lead contaminated hands, he adds. Lead exposure can lead to a wide range of biological effects, depending upon the level and duration of exposure. When ingested, inhaled or absorbed, lead can harm virtually every organ in the human body, especially the brain, kidney and reproductive systems.

Sindoor (also called vermillion) and kumkum have traveled through more than 5,000 years of Hindu culture. Female figurines excavated at Mehrgarh, Baluchistan, show that sindoor was applied to the partition of women’s hair even in early Harappan times. Legends says that Radha, the consort of Lord Krishna, turned the kumkum into a flame like design on her forehead. In the epic Mahabharata, Draupadi, the wife of the Pandavas, is believed to have wiped her sindoor in disgust and despair. The Puranas, Lalitha Sahasranamam and Soundarya Lahhari all mention their use.

Hindu astrologers say that, Mesha Rashi or the House of Aries is on the forehead. The Lord of Mesha is Mars and his color is red. It is believed to be auspicious. This is why red sindoor is applied at the forehead and at the parting of the hair. Both are signs of saubhagya (good fortune). Sindoor is also considered to be the symbol of the female energy of Parvati and Sati.

Sadly, today not only the ingredients of sindoor, but the methods for applying the bindi have been distorted. The traditional forehead marks have all but been replaced by black and red velvet cloth pressings, available in the ready-to-use sticker type forms. Sticker bindis, as we call them, come in every color, form, size and shape. They are a fashion statement these days. A majority of the young female population sports the red bindi as an embellishment to match their outfits. It has been transformed into an ornamental mark and lost its traditional meanings and preparations.

In ancient India, flower garlands were an important part of the evening dress of both men and women. They were often accompanied by visesakachhedya, painting the forehead with a bindi or tilak. In those days, thin and tender leaves used to be cut into different shapes and pasted upon the forehead.The dhava plant (grislea tomentosa) and its hard, blood-red clustered bushes are referred to as sindura (puspi) in the Unadi Sutras of Panini’s Astadhyayi.

Sindoor and kumkum have social and religious significance attached to them. Placed at the top of the forehead at the parting of the hair, it signifies that a woman is married. In North India, it is customary for a husband to apply sindoor on his wife’s forehead during important festivals. Sindoor is offered to married women on Navaratri and Sankranti. Sindoor and kumkum are also offered to Gods mostly in temples dedicated to Shakti, Lakshmi and Vishnu. The widespread use of tilak, pottu and bindi is deeply embedded in Hindu culture and here to stay.

A global spread of health awareness is prompting an industry-wide makeover. Now many companies are claiming to be making bindis in ISO 9002 certified manufacturing facilities with nontoxic and nonallergenic adhesives on the back. Similarly, cosmetic stalwarts like Shahnaz Hussain are claiming to produce safe herbal sindoor containing precious herbs and flowers such as hibiscus, marigold, safflower and chandan. We hope the entire industry follows their example and provides nontoxic products.

You have our permission to reprint the article. Please credit to the original author and to Hinduism Today.

"Oh, you are afraid?"
Preaching program in Kiev (Album with photos) Srila Prabhupada:...