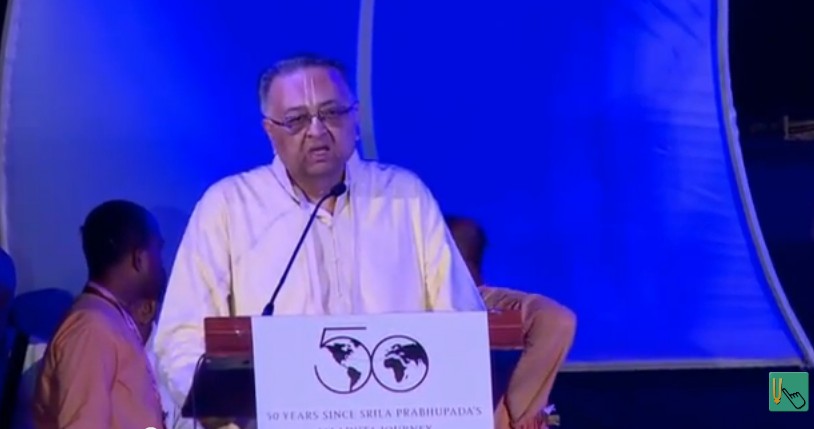 N. D Desai (Srinathji Prabhu) industrialist, philanthropist and devotee of Shri Krishna spoke this – Srila Prabhupada came to our house in 1971,in March. He came with young people. All westerners. My parents were both Vaishnavas but I was a Mayavadi.

Srila Prabhupada, he pointed out to one of his disciples. This young man was looking bright and Srila Prabhupada said to my father,
“This boy wants to become Indian, please help him get an Indian citizenship”. My father was a member of Parliament back then. And then Srila Prabhupada said, “He is a personal associate of Lord Chaitanya, he will learn Bengali and preach to ten thousand of people in Bengali”.
Why would he do that I thought? I knew Maharprabhu, how could this young boy be an associate of Mahaprabhu? And then I argued with Srila Prabhupada about that for four years. Until one day I agreed.

Now we see that same gentleman who was twenty back then is now in front of us, that gentleman is none other than Jayapataka Swami. He learnt Bengali and has thousands of Bengali Disciples. Wherever I go in the world I see his disciples. All glories to His Holiness Jayapataka Swami.

So this shows that WHATEVER SRILA PRABHUPADA SPOKE WAS ABSOLUTE TRUTH.