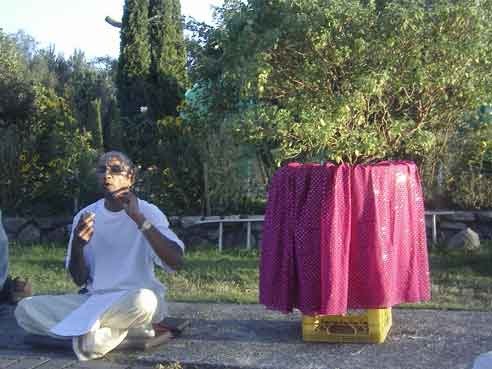 Sananda Prabhu lecturing in Vancouver, Canada beside one of the many Tulsi’s he had cared for.

It is with sadness that we announce the departure of His Grace Sananda Kumar Prabhu.

His Grace Sananda Kumar Prabhu left his body early this morning 9:45 AM (Friday August 14th) where he was staying in the Chilliwack Hospice in BC Canada.

While staying at the hospice, many local and visiting devotees were regularly visiting him.

Just the day before he departed, His Holiness Navayogendra Swami visited him and recently other very senior vaisnavas such as His Holiness Gopal Krishna Maharaja, HH Bhaktiragava Swami, Sarvabhauma prabhu, Her Grace Racitambara prabhu and others visited him.

Although his body was rapidly deteriorating due to “Lou Gehrig’s Disease” He was completely detached from it and totally Krishna Conscious.
He even mentioned that he was “looking forward to giving up his body and going back to Godhead”

Sananda Kumara Prabhu was a duly initiated disciple of His Holiness Jayapataka Swami.

He was a renowned practicing Ayur Vedic Doctor who was initially practicing in Kerala South India and then relocating to Vancouver, Canada with his late wife Rudrani Devi Dasi (ACBSP)

While practicing Ayur Vedic Medicine in South India, many senior ISKCON devotees such as His Holiness Satsvarupa Dasa Goswami, Indrayumna Swami, HH Bhaktiswarupa Damodar Goswami and others came to him for treatment thus his coming in contact with the Krishna Consciousness movement.

From the very beginning of his devotional life since the early 80’s Sananda Prabhu was a very staunch devotee who served in many capacities.
He developed the temple center in his home town of Kochi, South India and was the driving force in developing and running it.

While in Canada he continued to practice Ayur Vedic Medicine and take care of Srimati Tulsi Devi along with his late wife Rudrani.

We are confident that Sananda Kurmar Prabhu has gone back home to Krishna’s supreme abode but he will be sorely missed by all who knew and came to love and respect this very sweet and exalted Vaisnava.

The passing of Radharani Jerves in Ecuador